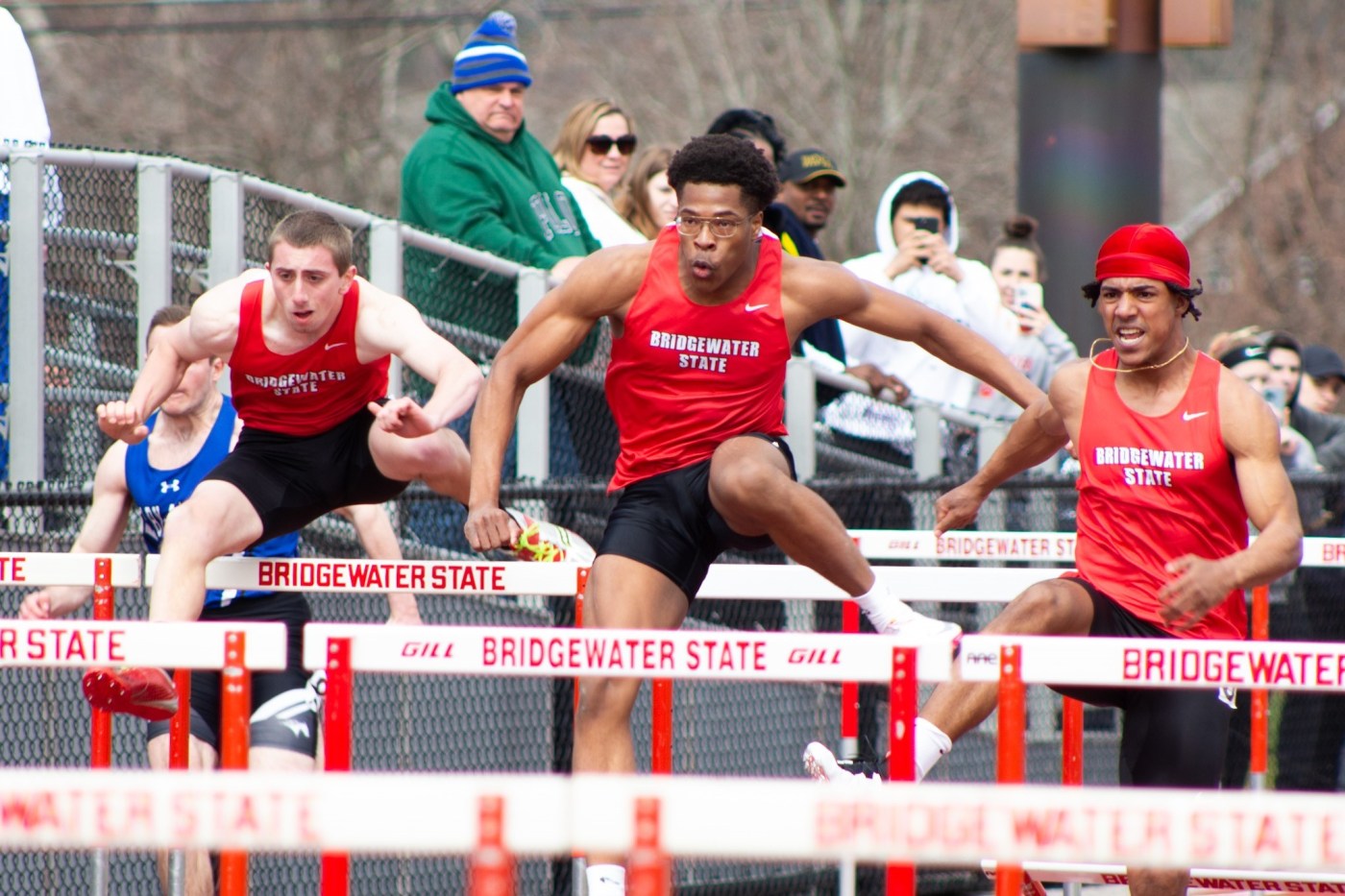 For the second time this season, Bridgewater State University freshman Chigozie Adigwe has been selected as MASCAC Men’s Outdoor Track & Field Rookie of the Week.
A 6-foot-2, 190-pound freshman, Adigwe captured top honors in both the 100-meter hurdles and 400-meter hurdles this past weekend at the Jerry Gravel Classic hosted by Westfield State University. The Lowell product posted a career-best time of 14.73 seconds in the 100 hurdles and recorded a time of 58.55 seconds in the 400 hurdles as he helped the Bears place second in the team standings at the meet.
Adigwe currently ranks 14th in all of Div. 3 in the 110 hurdles and third in the East Region.
The MASCAC Rookie of the Week honor marks the fifth of the 2021-22 academic year for Adigwe, a Lowell High grad who also earned the accolade three times during the indoor track & field season.
The outdoor season continues this weekend for the BSU track and field teams. The Bears will compete on Friday afternoon at the 13th Annual Eastern Invitational, hosted by Eastern Connecticut State University at 2 p.m., and again on Saturday at the Tufts Sunshine Classic at 10:30 a.m..

Desrochers named MASCAC Softball Player of the Week
Westford native Camille Desrochers of Framingham State University was named MASCAC Softball Player of the Week on Monday.
A senior captain and shortstop, Desrochers went 10-for-15, batting .667, with three doubles, a home run, seven RBI and four runs, including three walks and two stolen bases.
The 5-foot-5 mathematics major added plenty of pop sporting a 1.067 slugging percentage, and .737 on-base percentage, during a 2-2 week with the Rams.
She went 4-for-5 with a double and a game-tying homer to send the game into extra innings in a 7-6 10-inning setback to No. 24 Babson College.
She also went 6-for-8 with two doubles and five RBI in a doubleheader sweep of MCLA.
Framingham State (14-12, 7-1 MASCAC) is currently leading the MASCAC standings and looking good to win the conference.

Moran pitches doubleheader sweep at FSU
Framingham State softball pitcher Ally Moran picked up a pair of wins in a doubleheader sweep over Framingham State, April 18.
The Wilmington native and right-handed hurler gave up an unearned run on one hit and six strikeouts over six innings in a 8-1 win during game 1, before allowing two runs (one earned) off six hits with 10 K’s in the complete game 3-2 effort in nightcap. With the back-to-back wins, the psychology major evened her seaslmn record at 7-7, while sporting a 1.64 earned run average with 67 strikeouts in 85 innings of work.
The Falcons return to action on Thursday, April 21 as they host the Lasers of Lasell University for a non-conference double header, starting at 3 p.m.

Schwalm belts grand slam for Worcester State
Billerica resident Jacqui Schwalm belted a grand slam as the Worcester State softball team scored the most runs in a game since 2017.
The Lancers swept Mass. Maritime Academy in a Massachusetts State Collegiate Athletic Conference doubleheader, April 18 at Rollins Field.
The Lancers (14-14, 7-1 MASCAC) took the first game 2-1 behind a great pitching performance from Lowell’s Emily Bartlett, before erupting for a 20-4 win in the second game against the Buccaneers.
Bartlett threw a complete-game three-hitter and scored the eventual winning run as the Lancers defeated the Buccaneers 2-1 in the opening game. Bartlett struck out eight and gave up just one run while picking up her seventh win of the year. Westford native Jackie Andry drove in a run as the Lancers scored twice in the top of the fourth.
The Lancers scored 20 runs for the first time since April 9, 2017, when they defeated Mass. Maritime 21-3, in the five-inning nightcap.
The Lancers are on the road again when they travel to Clark, Wednesday, April 20 for a 3 p.m. non-conference doubleheader.

Camara, Sachetta excel at Monks Invitational
Local track stars Makany Camara and Nicholas Sachetta, helped Fitchburg State University women’s and men’s teams to a pair of sixth place finishes at the 2022 Monks Invitational, hosted by Saint Joseph’s College of Maine.
A Lowell resident and FSU sophomore Camara paced the Green and Gold’s women’s team, taking top honors in the high jump with a MASCAC qualifying mark of 1.52 meters. The Greater Lowell Tech grad also added a fourth-place effort in the 100-meter hurdles with a solid post-season qualifying time of 16.96 seconds.
The Fitchburg women’s team placed sixth overall with 46.50 points.
Over in the men’s bracket, senior Nicholas Sachetta was solid for the Falcons, posting a pair of MASCAC qualifying times taking third in the 3000-meter steeple chase (10.42.84). The Billerica native and Shawsheen Valley Tech product also secured sixth in the 400 meter (54.32).
The Fitchburg men’s team placed sixth overall with 65 points.
The Falcons return to action next Saturday as they compete at the 2022 Sean Collier Invitational, hosted by MIT, starting at 11 a.m.

South Hadley officials to host a series of community forums

What happens now in the post-mask world of travel?

R. H. Conwell Elementary School closed all week due to…

One swimmer was rescued at Dinosaur Tracks Park | News

At least 5 dead, 40 injured after SUV speeds into Christmas…