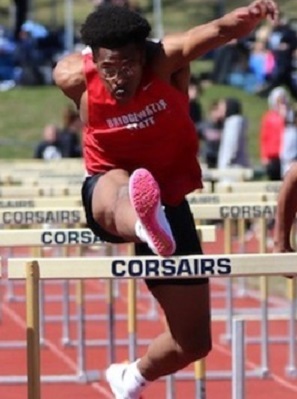 The MASCAC Rookie of the Week honor marks the sixth of the 2021-22 academic year for Adigwe who also earned the accolade three times during the indoor track & field season.

Lowell natives Makany Camara and Abbey Quirbach got the Fitchburg State University women’s outdoor track & field team off and running at the 2022 Shane Collier Invitational, April 23, hosted by MIT at the Sherie and Don Morrison Track.

Meanwhile the 4×400 meter relay team of Abagail Murphy, Veliotis, McInnis and Quirbach posted a strong time of 5:03.87 after finishing seventh overall in the event.

A 5-foot-9 Chelmsford High product, Quirbach is majoring in history.

In the field, Camara placed seventh in the high jump with a MASCAC qualifying mark of 1.48 meters.

Over in the men’s bracket, Billerica resident and senior Nicholas Sachetta finished 24th in the 800 meter with a post-season qualifying time of 1:59.50.

Falcons return to action next Saturday as they compete at the 2022 MASCAC Outdoor Track Championships, hosted by Bridgewater State.

Senior Devin Jones and Harris highlighted the day for the Ravens, with a school-record run in the 200-meter dash.

Jones won the event while setting the program record at 21.69. He also took third in the 100 for his 11.06-second time. He was accompanied in the 200 by Harris. The speedy sophomore took second at 21.86. Jones and Harris are now third and fourth in the NE10 in the 200 meters, respectively.

The 4×100-meter relay team consisting of sophomore Angel Gonzalez, Harris, Jones and Nathan Rinaldi claimed second for their time of 42.45.

A Billerica High graduate, Harris was a New England champion in the 300 meters, and a two-time qualifier for nationals.

Next week, the Ravens will have select athletes in action at the Penn Relays on April 28-30.

Noam Chomsky on the Russia-Ukraine war, The Media, Propaganda, Orwell, Newspeak and Language

South Hadley High School opens to the public before first…