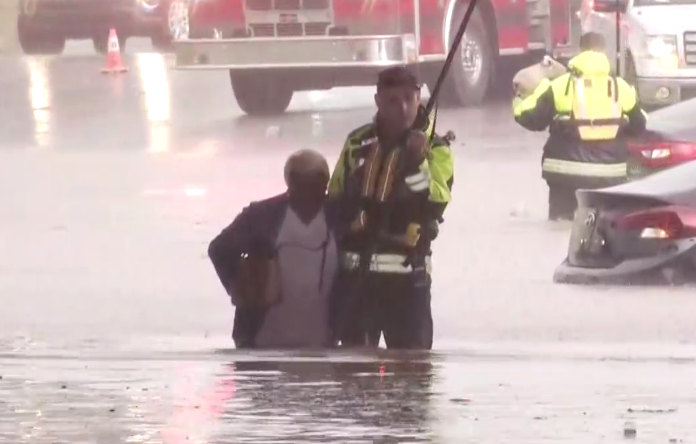 BIRMINGHAM, Ala. (WIAT) — At least 8 water rescues took place Wednesday afternoon in Birmingham due to flooding from heavy rain, according to the National Weather Service (NWS) and Birmingham fire officials.

“Birmingham Fire and Rescue has responded to 20 plus water-related calls throughout the city,” Captain Orlando Reynolds said. “8 were actual rescues.”

Reynolds said a 60-year-old man was also pulled out of the water by bystanders, who performed CPR on the man. He was transported to St. Vincent hospital by Birmingham Fire and Rescue in critical condition, Reynolds said.

Five Points South and areas near the University of Alabama Birmingham (UAB) campus experienced “major flash flooding,” according to a report collected by the NWS.

“Multiple water rescues being conducted along Clairmont Ave & many other flooding reports coming in from the warning area,” the NWS said in a post. “Please avoid travel in this area if at all possible!”

Around 3:30, UAB released a statement about flooding on campus.

“Campus is experiencing flooding in some areas,” the statement said. “Please remain weather aware and do not drive through standing water. Multiple Blazer Express routes are affected. Expect delays.”

According to UAB officials, road closures near campus included:

Officials with the Tarrant Police Department also shared photographs of major flooding at the intersection of Highway 79 and Springdale Road.

“As showers pass through the area,” they posted, “please drive safely.”

Around 4:00, the Homewood Fire Department reported flooding along Shades Creek in Homewood “with water approaching houses in at least one subdivision.”

Stay with CBS 42 for updates, as this is a developing story.

Getting Answers: Masking up when fully-vaccinated and how…