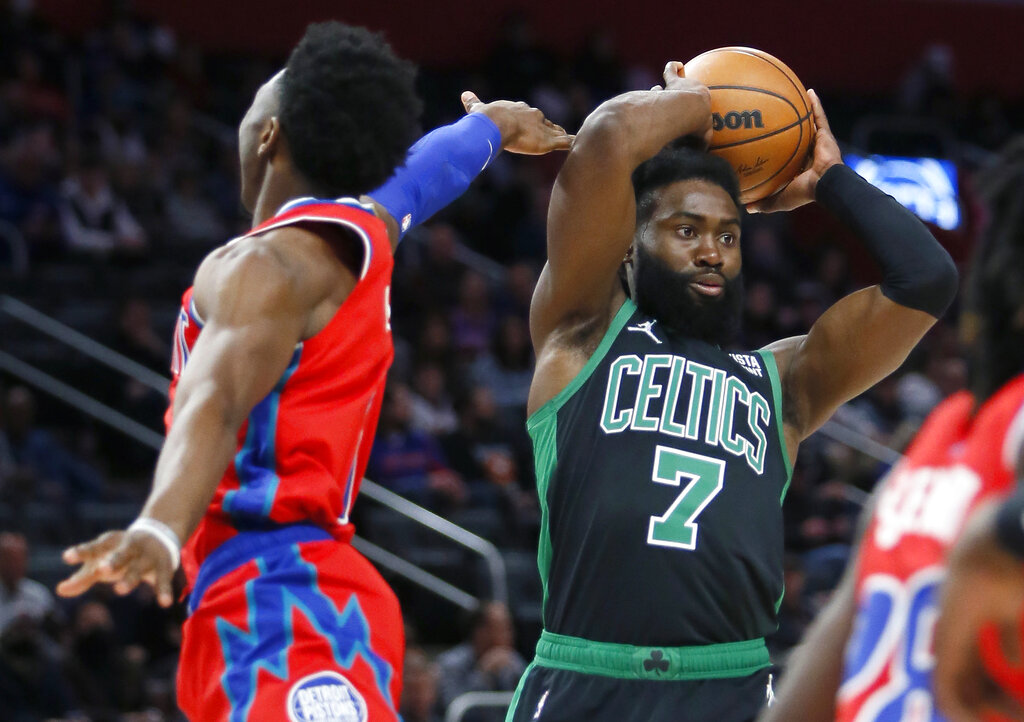 The Celtics have won 11 of their last 12 games, the blemish a 112-111 home loss to Detroit on Feb. 16. On Saturday, Boston was able to take advantage of Cade Cunningham’s foul trouble.

Cunningham led Detroit with 25 points in 27 minutes, but no one else approached 20 points.

The Pistons lost guard Hamadou Diallo with 6:29 left in the second quarter after he was ejected for pushing official Suyash Mehta when they nearly collided in transition. Diallo was averaging 15.0 points and 7.3 rebounds in his last eight games.

Boston led 56-54 at halftime, and, with Diallo gone, Pistons coach Dwane Casey had to stay with Cunningham after he picked up his fourth foul early in the third.

Cunningham, who played only nine minutes in the first half, had eight points in 11 third-quarter minutes without picking up his fifth foul. That was enough to put Detroit up 82-78 going into the fourth, but the Celtics quickly regained the lead with Cunningham on the bench.

After Cunningham’s fifth foul, Brown hit two 3-pointers to put Boston up 100-90 and force Casey into a timeout with 5:10 to play.

The Pistons couldn’t put together enough stops down the stretch to get back into the game.

Celtics: F Grant Williams talked coach Imu Udoka into reviewing a third-quarter foul and it was overturned by a replay review. … Boston outscored Detroit 35-22 in the fourth quarter.

Pistons: The game started at noon so the Little Caesars Arena crew would have time to convert the arena for a Detroit Red Wings game against the Toronto Maple Leafs at 7:30 p.m. … Marvin Bagley III left the game in the fourth quarter with an unknown injury.

Portion of Western Ave. in Westfield closed due to…

More local school mask decisions being made as state mandate…

Mr. Irrelevant: Getting picked last in the NFL Draft has its…