Bruins Alumni, Lowell PD skate for a cause – Lowell Sun 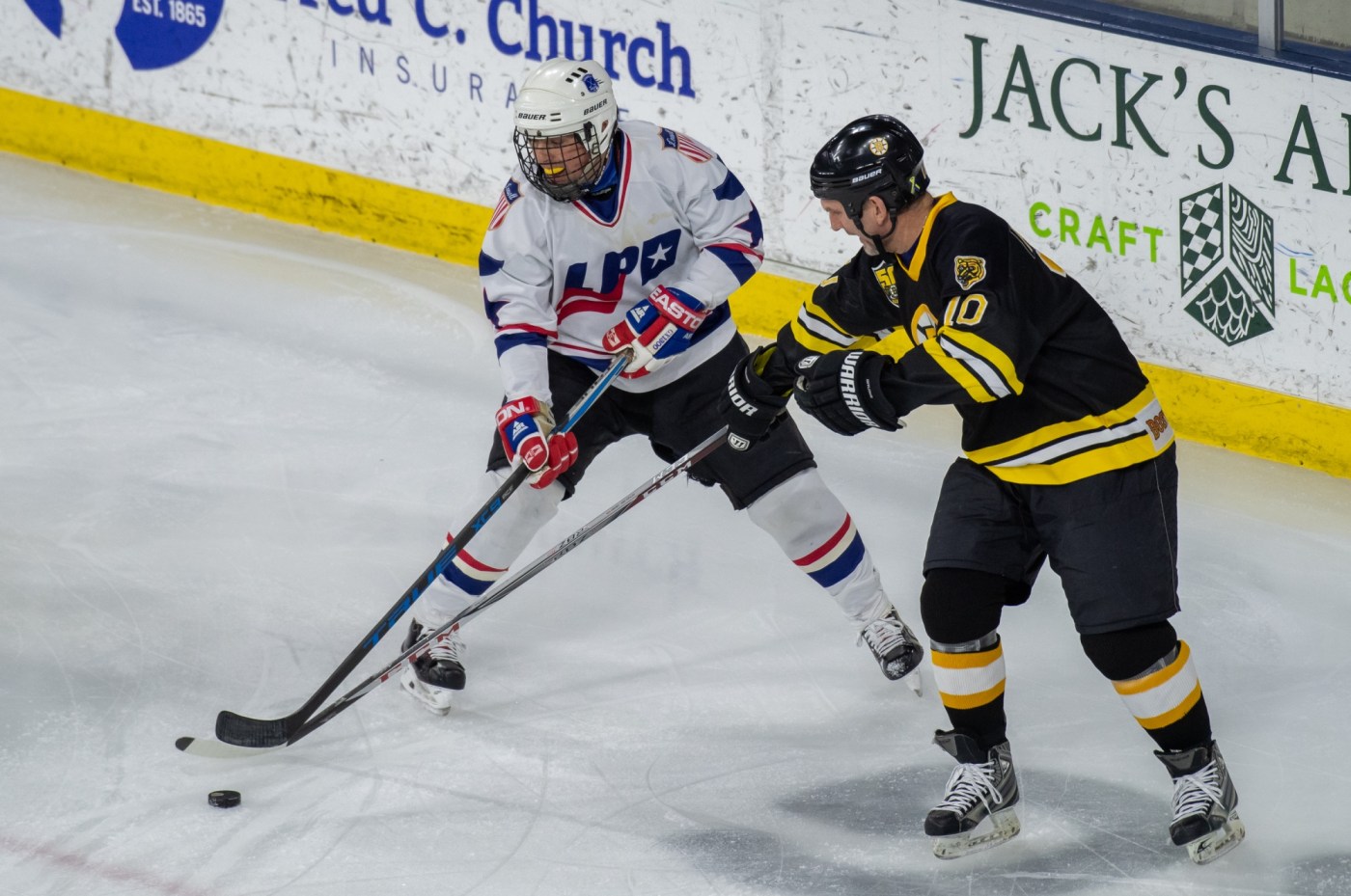 LOWELL — Battling butterflies the size of the Zamboni, members of the Lowell Police Department hockey team took to the Tsongas Center ice.

They stared across at their opponents, the Boston Bruins alumni, wearing the familiar black and gold jerseys.

Joe Mullen is in the Hockey Hall of Fame. Dave Silk won an Olympic gold medal in 1980 and was part of the Miracle on Ice team. Ken Hodge Jr. and Ryan Bourque are the sons of Bruins legends.

“Those guys can still play. There’s no doubt about that,” said 16-year LPD officer Scott Merrill, who manned Lowell’s net in the first half. “It was so much fun out there. They let up on us in the second half. That’s probably the most fun that I’ve ever had since we started the team three or four years ago.”

Let the record show that the Bruins alumni skated to an 8-4 win before an estimated crowd of 1,000.

The real winner, however, was the charity the game benefitted, the Bridge Club of Greater Lowell, an organization dedicated to helping people recover from addiction.

There was plenty of joking on both sides. Goaltender Reggie Lemelin, who played in 507 National Hockey League regular season games, played defense for the Bruins. After Lowell’s first goal, it was tough to tell who was happier, goal scorer Timothy Cooper or the Bruins.

But Mullen turned serious after the game when talking about the Bridge Club and addiction.

“It’s so prevalent in the United States and across the world. It’s a big problem. Hopefully some day we’ll get to the point where we don’t have an addiction problem. It’s crazy out there,” said Mullen, a Boston College star who became the first U.S. player to score 500 goals and 1,000 points in the NHL.

“I feel pretty good for my age,” he said. “I don’t know how I’m supposed to feel. I know it’s going to be hard when I have to give it up. I was just talking to (Bruins legend) Derek Sanderson and he said, ‘Keep going until you can’t go any more.’ ”

Mullen wasn’t the oldest former Bruin to lace up the skates Sunday. Tom Songin is 68, a year older than Lemelin.

“I was looking at the other team and I was like, ‘Hey, they’ve got some pretty good size.’ During my first shift one of their guys said, ‘Take it easy on us.’ I told him they’re a lot younger than us,” Mullen said with a smile.

The game was not a traditional one. Instead of three 20-minute periods, two 25-minute halves with running time were held.

“It was awesome,” said LPD officer Kyle Griffin, the captain of his squad. “Seeing some of the names on the back of their jerseys was awesome. They made it super enjoyable for us. The hockey community is definitely a brotherhood, just like the police community.”

Rick Middleton, in his 15th year as president of the Bruins Alumni, said the team plays about 30 games a year. They have raised more than $6 million for local charities in the past 20-plus years.

“We play to win. We’re not the Harlem Globetrotters. But we don’t play to embarrass anyone,” said Middleton, whose No. 16 was retired by the Bruins. “The biggest reason guys play in these games is the dressing room camaraderie because that’s what you really miss when you stop playing the game.”

The Bruins skated to a 5-0 lead despite Merrill making several fine saves. Ex-University of Maine star Jean Yves-Roy tallied the first two goals. Bob Sweeney, who played high school nearby at Acton-Boxboro, also netted a pair of goals for the Bruins.

Leading the Lowell PD offense was Sgt. Joe Kelly, who scored twice, one coming on a penalty shot.

“It was a real experience. A little intimidating, to be honest with you. They still got it,” Kelly said of the former Bruins. “They were all very nice. It was for a good cause.”

Kelly praised the work the Bridge Club is doing in Lowell and said all 16 players were proud to represent the Lowell Police Department.

Prior to the game, with a Bon Jovi song cranking in the background, Lowell PD players joked as they got dressed. They were still wearing ear-to-ear smiles after.

Merrill, who stopped 14 shots in the first half, received autographs years ago from Lemelin and Hodge Jr. Now he was trying to stop shots by them. Carrying his equipment out of the locker room after the game, Merrill knew what was going to happen when his adrenaline wore off.

Weather in 5 Winter Storm Warnings from Texas to Ohio Heavy…

Ramen Noodle Hacks, an All-New Stumpah, and the Secret to a…

Gas prices drop nearly five cents in the past week in…