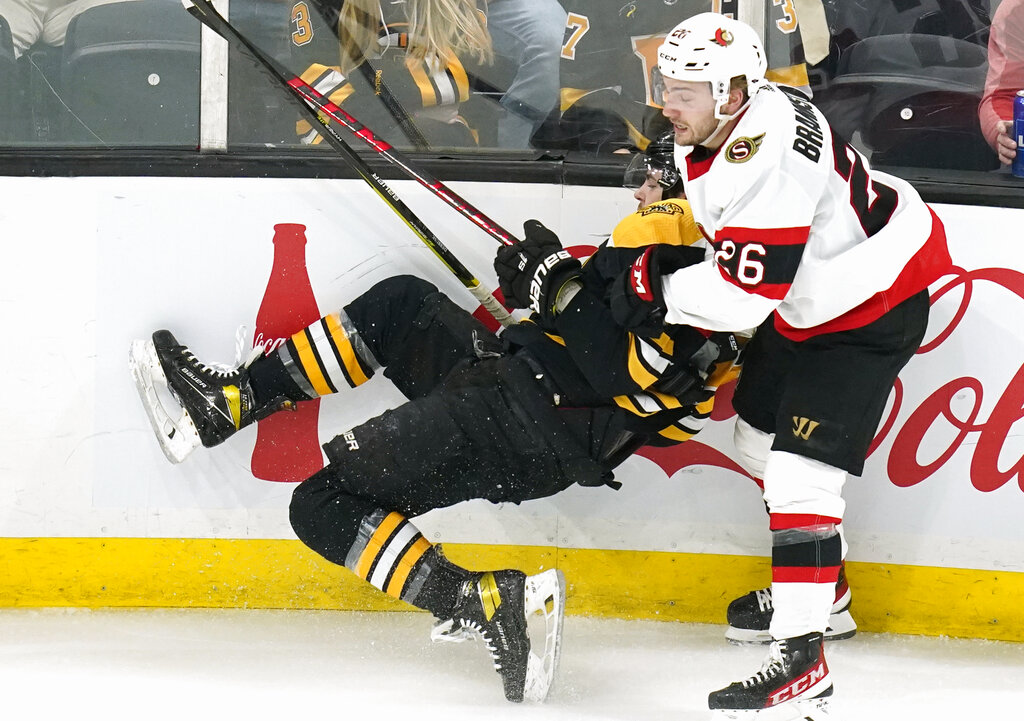 BOSTON — Brady Tkachuk, Josh Norris and Tim Stützle each scored a goal in the second period and the Ottawa Senators beat Boston 3-2 on Thursday night and sent the Bruins to their first three-game losing streak this season.

Jesper Froden scored his first NHL goal for Boston, and Marc McLaughlin added his third, just six games into his NHL career. The Bruins had won eight of 10 before the skid.

Long since eliminated from playoff contention, the Senators wiped out a 2-0 deficit with the second-period goals for their second consecutive win. Anton Forsberg stopped 40 shots for the Senators.

Boston’s Jeremy Swayman allowed a goal on the first shot he faced and finished with 21 saves after starter Linus Ullmark left following one period with an undisclosed injury.

Swayman stopped two clean breakaways — both against Connor Brown — in the final period.

Ullmark took a slap shot off the mask early in the game from Erik Brannstrom and appeared to stumble a bit after the puck caromed away. He stopped all eight shots he faced.

The Senators scored their goals in just under 10 minutes in the second period.

With Ottawa trailing 2-0, Tkachuk cut the deficit in half 47 seconds into the period by caroming the puck off Swayman on a shot from behind the net. The Senators then scored twice on the power play just 57 seconds apart.

Skating with a two-man, power-play advantage, Norris one-timed a shot by Swayman from the right circle.

Stützle then scored on a rebound, moving Ottawa ahead at 10:27.

Rookies McLaughlin and Froden gave Boston a 2-0 edge after one period. McLaughlin tipped in a shot from the edge of crease 6:36 into the game. Froden fired in a wrister from the left circle in the final minute.

The Bruins celebrated the 50th anniversary of their 1971-72 Stanley Cup champions. Hall of Famer Johnny Bucyk, 86, dropped the ceremonial puck with six of his former teammates around him.

The Bruins were down two top defensemen with Hampus Lindholm missing his fourth straight game with an upper-body injury and Brandon Carlo out with an undisclosed injury.

Bruins defenseman Derek Forbort saved what could have been another goal in the second when he pushed the puck out of the crease and under Swayman before it slid into the net. … Patriots QB Mac Jones watched from a luxury box with two teammates. … Boston’s leading goal scorer David Pastrnak missed his fifth consecutive game with an undisclosed injury. … Ottawa defenseman Jake Sanderson missed his ninth straight with an upper-body injury.

Deadline for New York state health care workers to get…

Pittsfield man pleads guilty to attempted coercion of a…