Bruins hang on to beat Canadiens 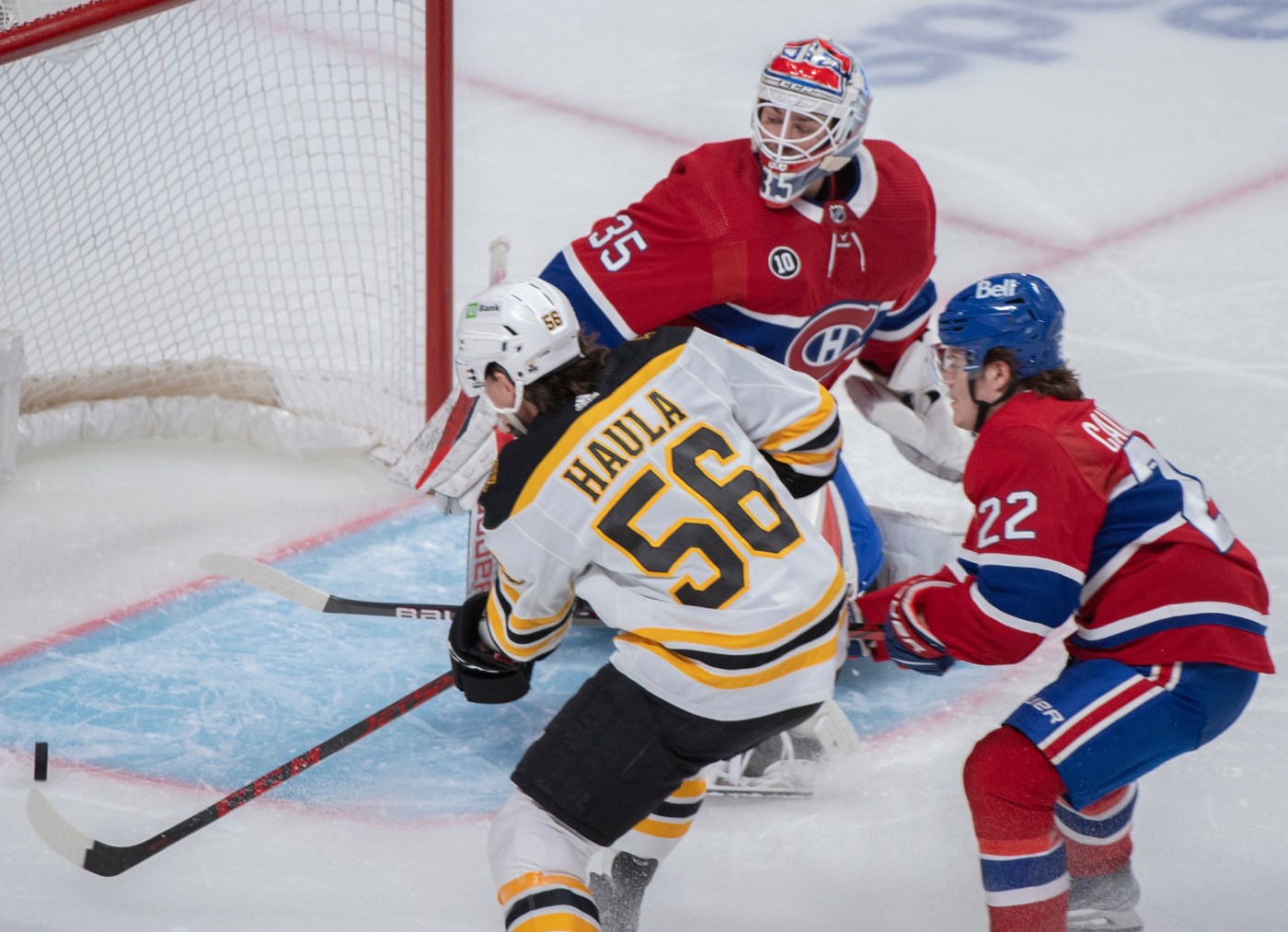 The Montreal Canadiens proved once again that they do pomp and circumstance better than anyone.

But they do not do hockey well enough right now to pull off the kind of comeback they were aiming for on Sunday night. On a night when the Habs honored the late Guy Lafleur, the Bruins flashed their current superiority and then hung on for a 5-3 victory over the Canadiens on the strength of two goals each from Erik Haula and Patrice Bergeron.

The Canadiens scored twice in the third period to creep to within a goal after the B’s had taken a 4-1 lead in the second, but Bergeron buried his second of the game into an empty net to seal it.

The evening began in highly-emotional fashion. In the first Canadiens game at the Bell Centre since the death of Lafleur on Friday, the organization and its fans gave a fitting tribute to the Habs legend. A 10-minute ovation – matching Lafleur’s No. 10 sweater – and a video montage set to Frank Sinatra’s “My Way” gave way to chants of “Guy!” and the familiar strains of “Ole! Ole! Ole!” from the faithful.

“It was really incredible,” said Haula. “I’ve never been a part of a tribute like that. Obviously a very special player, person in this community and the hockey world. We were fortunate to be a part of it.”

It was spine-tingling stuff and, in that moment, it felt like the Bruins would have a tough time in this building on this night. But the B’s came out flying, outshooting the Habs 17-9 and taking a 2-0 lead in the first period, albeit it in rather bizarre fashion.

A great effort by Brad Marchand helped the B’s get on the board at 15:03. While he’s had trouble scoring goals lately – he took a 10-game streak without a goal into the game – he’s shown some signs out of breaking out of the slump.

On the goal, Marchand first slipped by Jeff Petry with a nice move on the left wing and then fought through Petry’s check behind the net. He lost the puck briefly, but reclaimed it from Cole Caulfield before dishing out front to Jake DeBrusk. DeBrusk was robbed by Sam Montembault, but the rebound went to Patrice Bergeron, who potted his 21st of the season.

Then the B’s got the huge break. Haula stole the puck at the Boston blue line from Mike Hoffman to head out on a partial breakaway. Hoffman caught up to him and appeared to make a good defensive play, but was called for a slash. Haula was surprisingly awarded a penalty shot.

On the freebie, Haula actually overskated the puck and had to go back to collect it, which he did. On the do-over, he snapped his 16th of the season past Montembault. As everyone in the building seemed to wonder what just happened, video evidence showed that Haula completely whiffed without touching the puck, allowing him to go back and get it.

At the time, he wasn’t sure the rules were in his favor.

“Honestly, I was so flustered after that happened, I didn’t really know what was going on,” said Haula. “Then it was so loud that I didn’t know if the refs blew it or not. I just grabbed the puck and was like ‘Alright, I guess I’ll take it down.’ Thank God I scored, so we can move on quicker.”

Several years ago, Marchand had a similar experience in a shootout in Philadelphia, but he touched the puck on his muff and his chance was immediately nullified.

As the Habs fans grumbled, Haula bit down on his sweater to try to hide his giggles.

“I had to bite my jersey because I didn’ know how to react to it myself. Guys were laughing,” said Haula. “(Marchand) was hoping I touched it because he had done it before and he wasn’t going to be alone in that boat. But thankfully I didn’t and ended up scoring. But there were a lot of laughs.”

The B’s got themselves into trouble late in the period. Petry laid out Bergeron with a clean check, but Marchand didn’t like it and jumped Petry, earning a roughing penalty. Then at the end of the period, Trent Frederic took an unnecessary unsportsmanlike penalty against Petry.

But Haula gave the B’s their two-goal lead back at 4:04, thanks to a tap-in opportunity given to him by a great Tomas Nosek pass.

There was a scary moment when Laurent Dauphin drilled a crouching Taylor Hall along the boards. Hall was shaken up and and needed some attention from the training staff on the ice, but he was able to recover and kept on playing.

Then Charlie McAvoy gave the B’s a three-goal bulge at 18:09 with his 10th goal of the season. At the end of a 4-on-4, Bergeron won a faceoff back to McAvoy and he simply snapped a long-distance wrister past Montembault. It was the first time since April 2 in Columbus that the B’s had scored more than three goals in a game.

But the B’s let the Habs back in the contest in the third. Seconds after Marc McLaughlin took a delay of game penalty, Mike Hoffman rifled a shot past Jeremy Swayman at 3:13.

Then the B’s got really sleepy. Mathieu Perrault won a puck in the corner of the B’s zone during a change and Nick Suzuki was left all alone in the slot to beat Swayman and get the Habs back to within a goal with 12:41 left in regulation.

For a moment, it felt like the Montreal extraterrestrials were at work. There was even a close call near the Bruins bench when the B’s were changing and there seemed to be a few too many B’s on the ice. Lafleur, of course, scored perhaps his most famous goal in Game 7 of the 1979 semifinals to tie the game late after the B’s took a too-many-men penalty.

“Hey, wouldn’t that have been something, huh?” said coach Bruce Cassidy, who was a 14-year-old diehard Bruins’ fan when Lafleur scored that goal. “The ghost of Guy getting us.”

But the officials’ arms stayed down, they played on, and another son of Quebec finally salted it away with the empty-netter.

Gas prices getting lower | After GMS

Gas prices increase to $3.99 per gallon in Springfield

HUD grant will help low-income seniors live in their homes…

Traffic stop in Holyoke leads to discovery of illegal…

Greek flag raised in Springfield ahead of Glendi

Today: Join us at MGM Springfield for Toys for Tots! | News

TEXAS HILL COUNTRY – It's about to get REAL!…

Fans head to local bars for Monday night’s Patriots vs.…