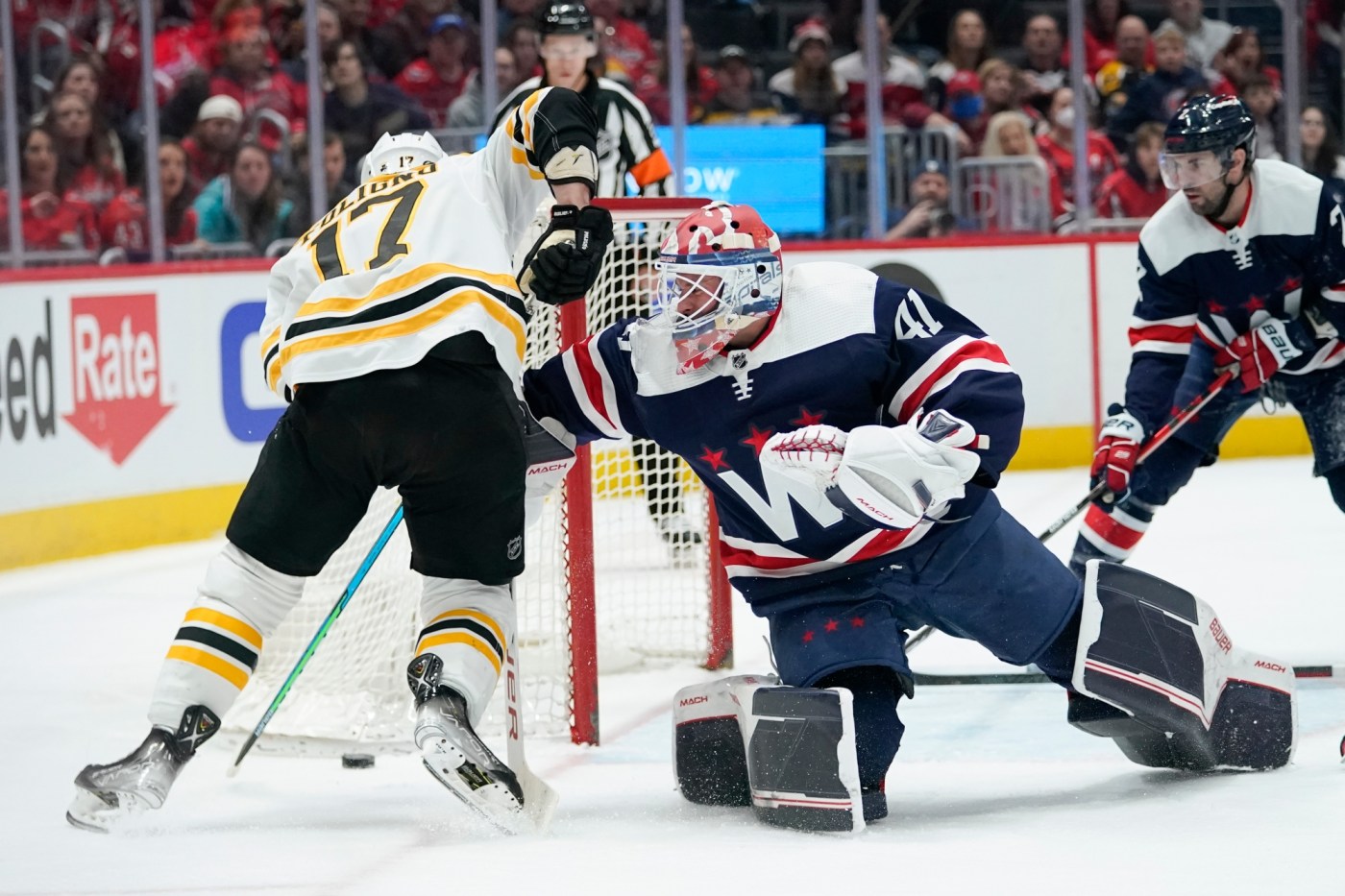 The Bruins’ mounting issues with their power play short-circuited their chances of finishing off their four-game road trip on happy note on Sunday in Washington, D.C.

The B’s went 0-for-4 on the man advantage and they dropped a 4-2 decision to Capitals in the matinee at Capital One Arena. They finished the trip 0-for-16 on the power-play. Linus Ullmark (27 saves) was again very good but he suffered his first loss in seven starts.

Lars Eller snapped a 2-2 tie off a fortunate bounce at 7:18 of the third period. Eller simply fired a puck toward the net from the left boards that deflected off Erik Haula and past Ullmark. With the B’s not having much in the third, that stood up as the winner.

The B’s pulled Ullmark for the extra skater late, but the 6-on-5 was no more effective than any of their power plays, and Alex Ovechkin added an empty netter in the final seconds.

They were still playing without David Pastrnak, which doesn’t help the power play much, but the problems have been lingering from before the sniper left the lineup. They come back to start a three-game homestand with their PP having clicked just six times on their last 47 chances. They went 2-2 on the trip, and the man advantage cost them in both losses.

“Lack of execution. I’ve seen it for a while now,” said coach Bruce Cassidy. “With Pasta in the lineup or without, with (Patrice Bergeron) in or out, we don’t execute well enough right now… with that I mean the quickness, the pace of your execution, hitting the net when you do get your opportunity. We missed an open net again today. So those numbers get skewed. Then I think there’s stubbornness on the entries. Like the 6-on-5, one guy trying to go through instead of going through as a group, playing behind them and going and getting it the old fashioned way. We’ve had some issues there with stuff we’ll continue to try to coach into our group. At some point the execution will turn because they’re good players and they have produced on the power play. Hopefully the stubbornness on the entries, they’ll change their approach.”

Cassidy also saw problems with puck management in their own zone, believing the goals against were preventable.

“Through two periods, their best chances started with a puck on our stick. Even their last goal, we won the draw,” said Cassidy. “These are good teams and you can’t mismanage pucks and expect to get away with it all night. That’s usually what turns the games against a lot of times.”

Both Ullmark and Vitek Vanecek flashed some leather in the first period, turning away a couple of excellent chances each. It appeared very briefly that the B’s had taken a first period lead when a rebound went off Trent Frederic and in but it was immediately waved off for a distinct kicking motion, which was upheld by video review.

The shooters started to find the back of the net in a see-saw second period. When the dust settled, the teams were tied 2-2.

John Carlson gave the Caps the first lead of the game at 4:11 when he blasted a slap shot past Derek Forbort and then Ullmark, who had lost his stick on incidental contact with Evgeny Kuznetsov.

But the B’s took the lead on a pair of goals a minute apart.

They evened it up on a fourth-line goal at 7:55. Nick Foligno circled through the slot, drawing Vanecek out of the his net. From behind the net, Foligno pushed the puck through the empty crease and Curtis Lazar was there to score his eighth goal of the season.

The B’s then took the lead on Erik Haula’s 14th of the season. Charlie McAvoy thwarted a Washington break-out play in the neutral zone and put Haula back on the attack. From the top of the left circle, Haula sizzled a perfectly-placed slapper off the post and in.

But the B’s couldn’t hold the lead. Ullmark made a stop on an Eller shot from the slot, but he could not locate the rebound. Tom Wilson beat Forbort in the puck battle at the top of the crease and banged it home between Ullmark’s pads.

The Caps then made their own luck in the third as they played their best period of the game, outshooting the B’s 15-6 and earning the bounce that won it.

“Tough bounce,” said Haula. “That was the story in the third. I think they were the better team in the third and that was the difference in the game.”

West Springfield Mayor Will Reichelt sworn in for third term

7 tips to get the most money when selling your car

One person displaced following fire on Old Lyman Road in…

'God is separating the sheep from the goats': Trump…

THE END OF VAN LIFE? (leaving our van in Mexico)