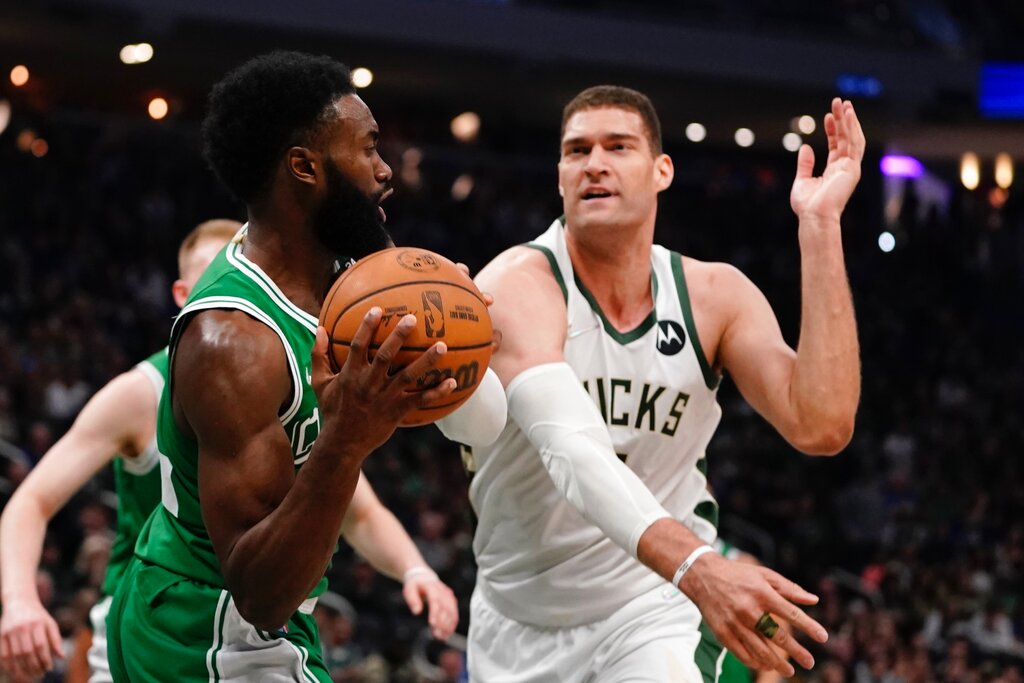 MILWAUKEE — Giannis Antetokounmpo and Jrue Holiday each scored 29 points and the Milwaukee Bucks edged the short-handed Boston Celtics 127-121 on Thursday night to take over second place in the Eastern Conference standings.The Bucks (50-30) scored the game’s final nine points to move a half-game ahead of the Celtics (50-31) and a full game ahead of the Philadelphia 76ers (49-31), who lost 119-114 at Toronto on Thursday.Milwaukee withstood a triple-double from Jaylen Brown, who had 22 points, 11 assists and 10 rebounds for the Celtics. Brown’s 11 assists matched his career high.Marcus Smart shot 7 of 12 from 3-point range and was the Celtics’ leading scorer with a season-high 29 points. Daniel Theis had 22 points and Derrick White added 19 for the Celtics.Khris Middleton had 22 points, nine assists and eight rebounds for the Bucks. Antetokounmpo had 11 rebounds and five assists. Holiday had eight rebounds and eight assists.One night after a 117-94 victory at Chicago, the Celtics held Jayson Tatum and Al Horford out of Thursday’s game. They also continued to play without Robert Williams III, who hasn’t played since March 27 due to a meniscus tear in his left knee.The Celtics still almost won on the road.Smart put Boston ahead 119-118 on a 3-pointer with 4:25 left and added a driving layup nearly two minutes later to make it 121-118.Milwaukee’s Bobby Portis tied it by sinking a 3-pointer with 2:11 remaining.The Bucks took the lead for good when Antetokounmpo made the second of two free throws with 1:31 left. After White missed a 3-pointer, Holiday converted a putback of his own miss to make it 124-121 with a minute remaining.After Theis couldn’t score from right under the basket, Antetokounmpo made one of two free throws to extend Milwaukee’s lead to 125-121 with 39 seconds left.

Bucks guard George Hill offered more clarity Thursday on the neck injury that caused him to miss 17 games before he returned to action March 14.Hill said he had a partial tear between the sixth and seventh thoracic vertebra in his spine. Hill didn’t undergo surgery and plans to revisit the issue after the season.“Surgery can be season-ending, so you don’t want to do that,” Hill said after the Bucks’ Thursday morning shootaround. “You want to figure out how I can manage to get back out with the guys. It feels a lot better now. I’m just trying to give it everything I have.”

Celtics: Rookie Sam Hauser, a Wisconsin native who began his college career at Marquette, had a career-high 11 points and went 3 of 4 on 3-point attempts. Marquette and the Bucks both play their home games at Fiserv Forum. … Celtics assistant coach Ben Sullivan, an assistant on Milwaukee’s staff last season, received his 2020-21 championship ring in a pregame ceremony.Bucks: The Bucks requested waivers on DeAndre’ Bembry, who played eight games for them before suffering a season-ending knee injury in a loss at Golden State on March 12. … Grayson Allen didn’t play due to left hip soreness. “He got hit a little bit the other night in Chicago,” Bucks coach Mike Budenholzer said before the game, referring to a 127-106 victory over the Bulls on Tuesday. “Hopefully it’s short-term.” … The Bucks outscored the Celtics 58-34 in the paint.

Celtics: At Memphis on Sunday. The Celtics beat the Grizzlies 120-107 in Boston on March 3.Bucks: At Detroit on Friday. The Bucks are 2-1 against the Pistons this season but lost the last matchup 115-106 at Milwaukee on Jan. 3.

Road work on I-90 in Lee, Otis, Blandford next week