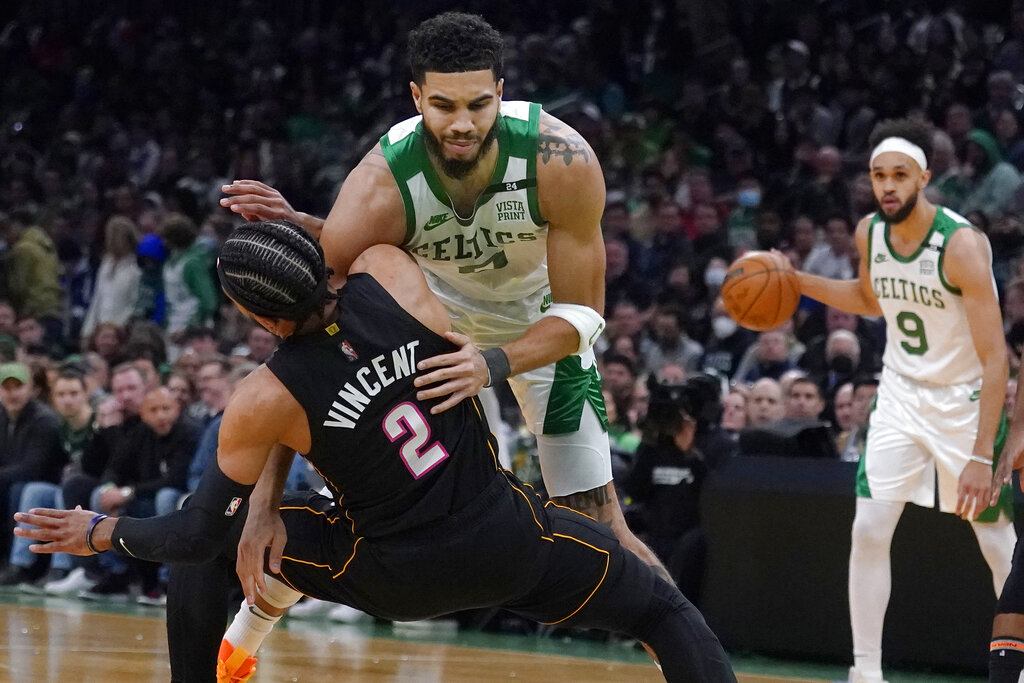 BOSTON  — Jimmy Butler scored 24 points, Kyle Lowry added 23 and the Miami Heat rallied in the fourth quarter to hold off the Boston Celtics 106-98 on Wednesday night to stay atop a tight race for the Eastern Conference’s top seed.

Since briefly taking over the East’s top spot, Boston has lost two in a row for the first time since late January.

The back-and-forth game had very much the intensity of a playoff matchup, featuring nine ties and 16 lead changes.

Miami led by just a point at the half, but opened an 11-point cushion at the start of the third quarter.

The Celtics answered, running off 16 straight points to nudge back in front and eventually carried a 83-79 lead into the fourth.

It grew to 90-85 with 7:40 remaining when Daniel Theis tipped in a lob from Derrick White through contact from Dewayne Dedmon, who fouled out on the play.

The Heat stayed composed and responded with 12-3 spurt to take a 98-93 lead on a short jumper by Butler.

Boston cut it 98-96 with less than three minutes left, but came up empty on three straight possessions.

Lowry broke the stalemate with a jumper. Brown then had his shot blocked on the the Celtics’ next trip, and Lowry fed Butler for a fastbreak dunk to make it 102-96 with 1:43 left to play.

Boston had its own transition chance trailing 102-98 before Tatum was called for an offensive foul. The Celtics challenged the call, but it stood after review.

After another miss by Boston that was called out of bounds on Boston, Marcus Smart threw his hands up in frustration at the call and was ejected.

Miami was then able to close out the game on the free throw line.

Heat: Caleb Martin sat out with a right calf bruise.

Celtics: Grant Williams took Robert Williams place in the starting lineup. … Tatum was whistled for a technical foul late in the second quarter after complaining about a foul on Butler.

Wednesday marked the first true glimpse at what the Celtics’ lineup and rotations will look like for the foreseeable future with center Robert Williams III sidelined following knee surgery.

Things started a little rocky for Boston with Miami jumping out to an early 8-3 lead, scoring some wide-open baskets as it took advantage of some early miscommunication by the Celtics on the defensive end.

Boston cleaned that up in the second quarter by limiting the Heat to one-shot possessions, forcing turnovers and converting them into points.

Miami took a 53-52 edge into halftime, with both teams virtually mirroring each other on the stat sheet.

Oakland church teams up with Kaiser to administer COVID-19…

Tue, Jan 25 – Chaplet of the Divine Mercy from the…

Ramen Noodle Hacks, an All-New Stumpah, and the Secret to a…

Dozens of tornado warnings during severe weather outbreak in…

"This Is Way More Serious Than You Think” | Elon Musk…

Snow update for this weekend! SUPERBOWL Sunday snow for…