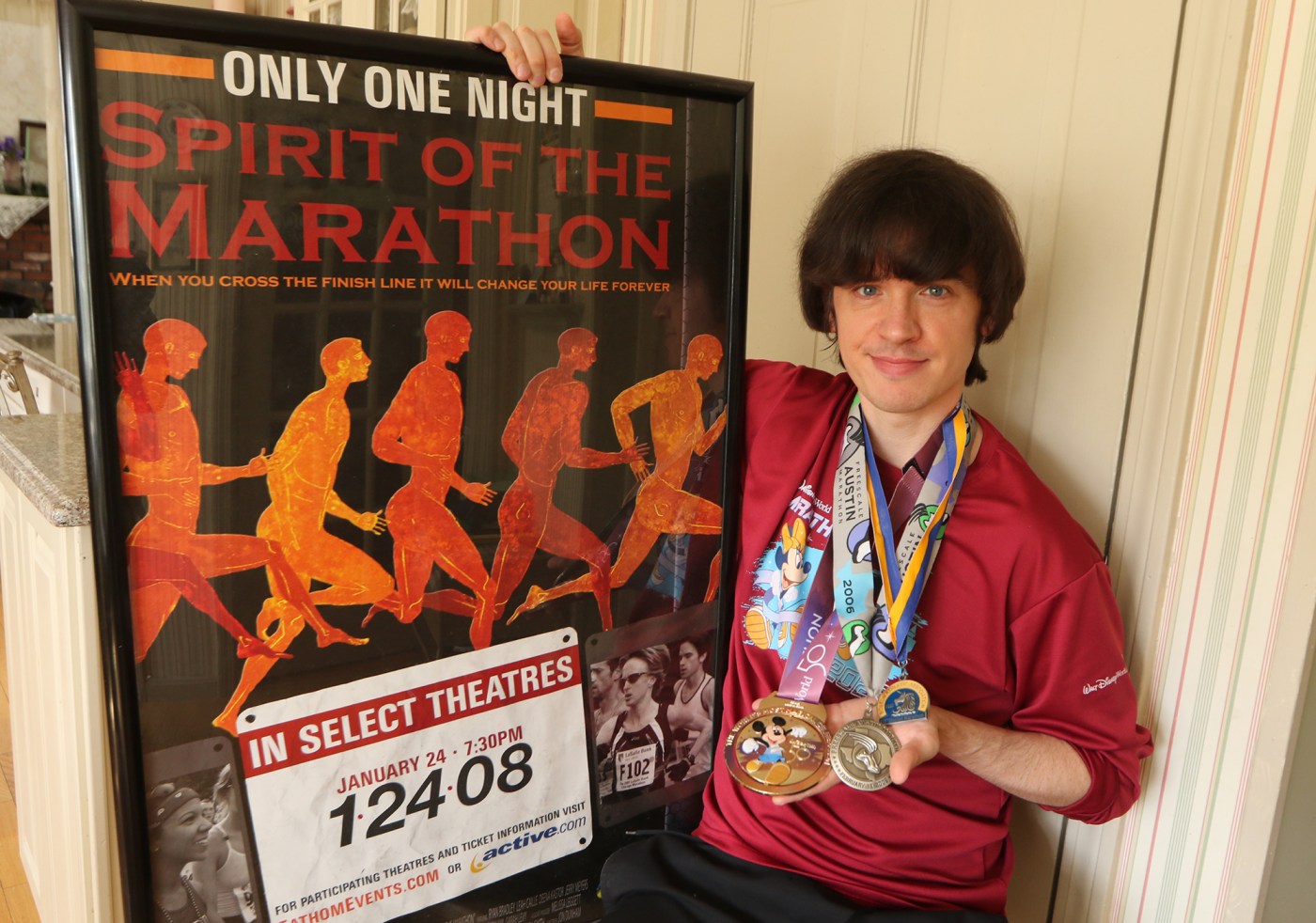 Until lacing up the sneakers for the Disney Marathon in January, he had taken a 15-year break from racing.

Regardless, on Saturday night, despite taking more than one unusual path, Casey Moulton will be inducted into the Greater Lowell Road Runners Hall of Fame.

“I’m surprised. I couldn’t believe it,” he said. “I was kind of stunned when (former GLRR President) Glenn Stewart reached out to me. I don’t like to toot my own horn. I’m a humble guy. Any Hall of Fame is kind of a big deal. That’s really nice.”

The 40-year-old’s racing window has been relatively small. But he crammed so many accomplishments into that window. The Pelham resident began running races when he was 20. He finished second in his first race, the East End Club 5-Miler in Lowell.

Soon the baby-faced Moulton was leaving competitors in the dust. He won short races. He won half marathons, including one in which the runner-up said he knew he was running for second place after only 100 yards. He won 20-mile races. He ran in the Olympic Marathon Trials.

“My brother kind of went his own way,” his twin brother, Patrick, said. “I’m really proud of him. He’s worked really hard. He took his own path and he had a very successful career. I’m still impressed by my brother.”

In eighth grade, Casey Moulton finished third in New Hampshire in cross country. But then he stopped racing.

While Patrick Moulton was shining at Pelham High, winning New Hampshire and New England track and cross country championships, his younger brother (by one minute) watched from the sidelines.

“He just took another path,” his mother, Sandra, said. “And that was fine. They were always very supportive of one another.”

When Patrick Moulton went off to Providence College and was an all-Big East performer all four years, Casey Moulton attended UMass Lowell. Instead of running for UML, however, the younger Moulton joined the Greater Lowell Road Runners and began dominating the local road race circuit.

Running 90 to 100 miles a month is a lot. That’s the mileage Moulton averaged every week for seven years. All that training paid off.

On Feb. 19, 2006, the Moulton brothers, then 24 years old, entered the Austin (Texas) Marathon. Despite icy conditions, Casey Moulton ran the race of his life. He finished sixth in a blistering time of 2 hours, 15 minutes, 26 seconds. That was nine seconds faster than Patrick Moulton, who finished eighth.

“That was the perfect race. I hold the marathon PR (personal record) in the family. He has all the state titles,” Casey Moulton said with a laugh.

The previous October he had finished 17th at the Chicago Marathon in 2:20:19. Despite all his successes, he remained with the Greater Lowell Road Runners and never switched to a higher-profile club.

But after running in the Olympic Marathon Trials in New York City on Nov. 3, 2007, and finishing a disappointing 83rd, he began to lose his competitive fire. He still ran, every day. But he admitted he was burned out.

“I felt like I wasn’t improving the way I wanted to. I love running. I never stopped running. I pushed my limit,” he said. “I didn’t miss competing because I felt I was giving it everything. At some point you have to focus on other things in your life. Certainly, I feel like I gave all I could give. It was easy walking away.”

Last fall, the Moulton brothers decided to take their mother to Disney World in Florida. While in Orlando, they would run the marathon. After just two months of training, Casey just wanted to finish. The brothers ran together for 24 miles. Patrick won his age division and ran 2:49:38.

“It was great. I really enjoyed it. It was like old times,” Patrick Moulton said of running with his brother again.

“I kind of got the bug again when I ran the marathon. I think I will definitely run marathons again,” he said.

Perhaps one this fall. It was the first race the Moultons had run together since the Olympic Trials in 2007.

Casey Moulton serves as a caretaker at the Kimi Nichols Center in Plaistow. A former post office employee, Moulton has spent the last four years working with people with disabilities.

“I love it. I’m a compassionate person,” Moulton said.

His oldest brother, Ryan, was born seven weeks early and was handicapped. The Moultons vowed to keep him out of a group home. He had a home, their home. Six years ago, Ryan Moulton passed away.

The Moultons faced more heartache two and a half years ago when their father died after suffering a massive heart attack. Brian Moulton, a star athlete at Dracut High and UMass Lowell, was a popular coach in Pelham who loved teaching his sons about various sports. All that pain drew the Moultons — Sandra, Casey, Patrick, who lives in Providence, R.I., and their sister, Erin, a principal in Watertown — even closer together.

“My father would be so proud of him,” Patrick Moulton said of Casey being inducted into the GLRR Hall of Fame.

Casey Moulton still loves running. But he won’t sprint up to the microphone Saturday during his Hall of Fame speech at Owen and Ollie’s in Dracut, where he’ll be inducted with Melanie Hire and Jay McCarthy.

“I’d probably rather run a marathon,” he said.

CAUGHT ON VIRTUAL RAILFAN CAMERAS, SHOOTING AT THE TUCSON,…

Wandering around Boston in the night during winter.…

Reminder: Use caution around snow plows

Identifying what’s missing and what the Patriots need to fix…