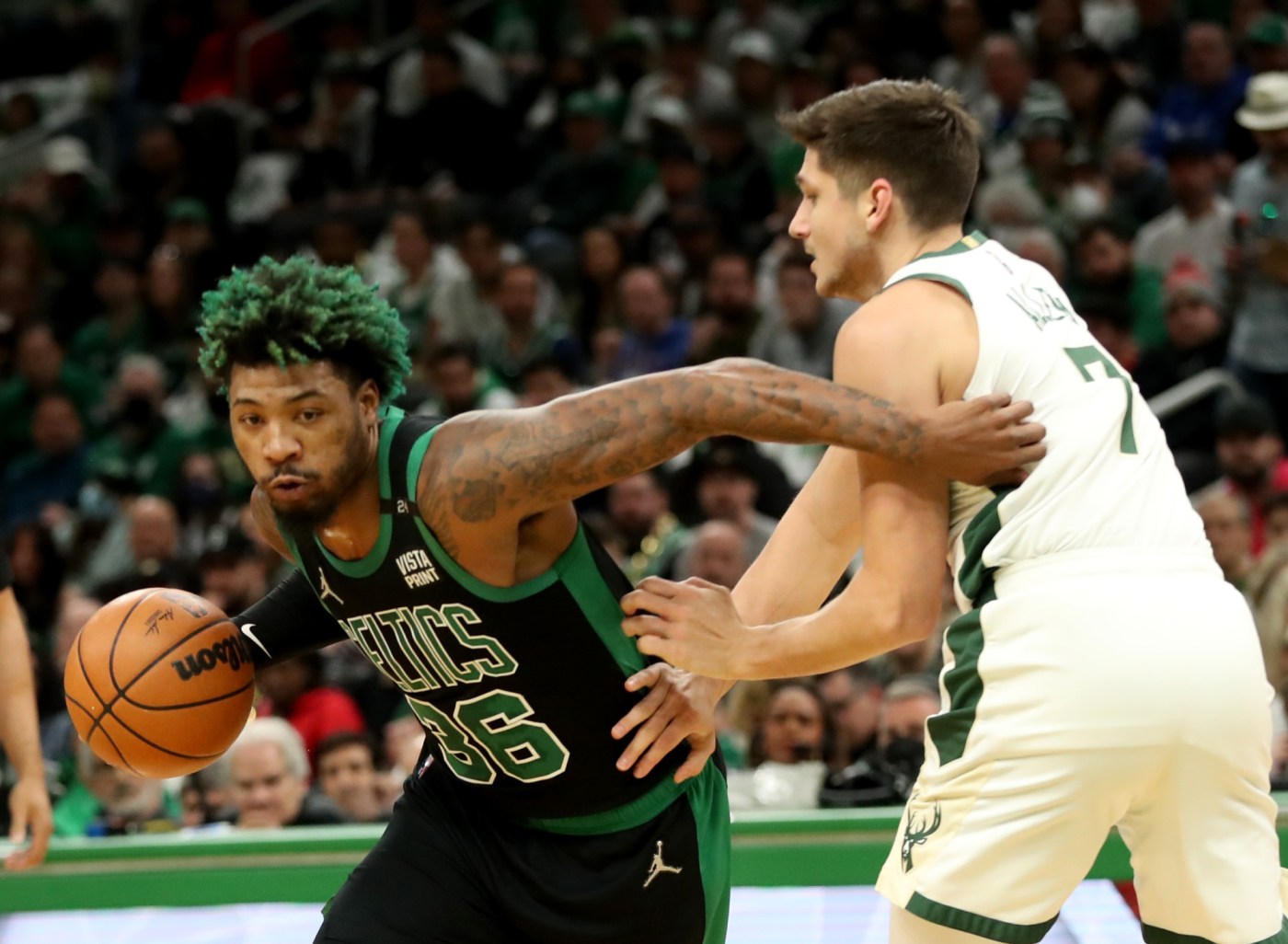 The Celtics did their job on Giannis Antetokounmpo, and still it wasn’t enough.

Though the Bucks star had to labor for the scoring part of his triple-double (24 points, 9-for-25 FG, 13 rebounds/12 assists), Milwaukee was even better at mobbing and bumping Jayson Tatum and Jaylen Brown as the Celtics sank under duress in a 101-89 loss in Game 1 of the Eastern Conference semifinals.

The Celtics, mostly limited to 3-pointer attempts and long 2s by Milwaukee’s drop-down coverage, were not able to come up with much as Tatum (21 points, 6-for-18) and Brown (12 points, 4-for-13, seven turnovers) struggled throughout.

As most on the Celtics side conceded, they were disrupted by Milwaukee’s more physical nature.

“We got to be the harder-playing team. And tonight they had a chip on their shoulder, they came in with an edge, they were locked in,” said Brown. “And they punched us in the mouth, they definitely were pressuring us and making it hard for us to get into our stuff. But as we watch, there are ways to be efficient and be effective. We will find them and we’ll be a lot more aggressive when needed for the next game.”

Overall the Celtics shot 33.3%, with only 10 of their 28 baskets coming inside the 3-point arc. They also fell prey to Bucks pressure, turning the ball over 18 times for 27 Milwaukee points.

“In a way, it’s good to get this dud out of the way offensively,” said Ime Udoka, who thus far has shown great ability to adjust in a playoff series.

Then again, the Bucks are on another level from the Nets defensively.

“Twenty-seven off our turnovers is way too high, especially when they score one-on-one, so got to be stronger with the ball, understand what they’re gonna be,” said the Celtics coach. “They’re gonna have five guys in the paint every time we have penetration and so being strong with the ball and having our outlets there is the first part, I think.

“So stopping their offense and us having good offense as well, so, might have got caught up in it a little bit. We’re guarding in a way and things are getting called maybe not as evenly at times, so we’ve just got to play through that. It’s the playoffs, so we’ve got to understand the physicality and the level is going to go up.”

Antetokounmpo punctuated this painful afternoon with 2:11 left when tossed the ball off the backboard from five feet out, grabbed the carom and dunked for a 101-87 lead. The Bucks, though never leading by more than 17 points, seemed to progressively be in command.

“He made a hell of a play. We just gotta be more solid,” Tatum said of the Antetokounmpo dunk, which preserved a sizable cushion after Milwaukee opened up space earlier in the quarter with a 12-3 run.

The Celtics, who missed their first five shots of the fourth — four of those open 3-point attempts by Payton Pritchard — didn’t make a basket in the quarter until Al Horford’s 3-pointer with 8:15 left.

“There’s a lot of things we can take away from this,” said Tatum. “The series is not won or lost off of one game, especially not Game 1. Give them credit, they were the better team today, they played better than we did and they deserved to win. Watch film, get your body right and get ready for Game 2. Play better, it’s as simple as that.

“We’ll get together as a group tomorrow and play with more poise. We had a lot of turnovers. They had 27 points off our turnovers in transition and things like that. Being too careless, they are physical team and a really good team. It’s not going to be easy but we can’t just let them speed us up like that. We got to be stronger with the ball, more decisive with the decisions that we make and I think we will be next game.”

Why are so many vaccinated people getting COVID-19 lately? |…

Rivalries heating up on the slopes – Lowell Sun

“Motivated by hate, to intimidate others,” man indicted for…

Best Boston Neighborhoods I Where you should live If you…

Getting Answers: how shortages are impacting Westfield…

Easthampton Council on Aging remains closed due to COVID-19…