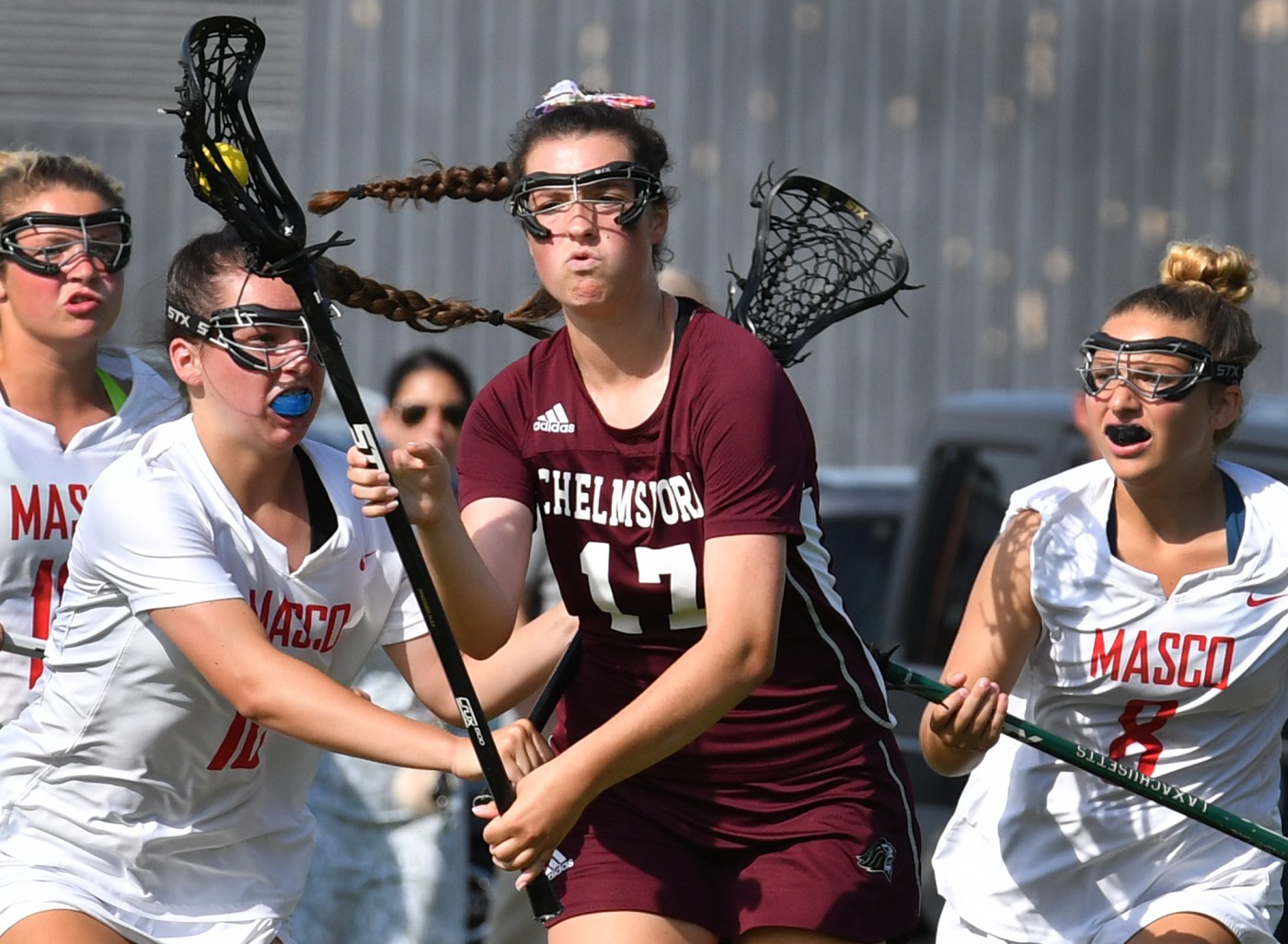 CHELMSFORD — Julia Pitts has dealt with a lot in her young life.

The three-sport Chelmsford High athlete has suffered several losses, including the death of her best friend in March of 2021. Like everyone else, Pitts faced the COVID-19 pandemic, which led to losing her sophomore lacrosse season. When athletics returned, she played six months of field hockey, only to tear her ACL. Pitts missed all of the basketball season and half of the current lacrosse season.

But instead of focusing on the negative, the granddaughter of former longtime Chelmsford athletic director Jack Fletcher has put her head down and has worked hard to get healthy. Pitts is ahead of schedule for recovery time and is hoping to get the go-ahead from her doctor to return to the Lions in mid-May.

“A lot of stuff has happened, a lot of awful things, but all of it has taught me that you have to keep on pushing and keep going on because life doesn’t just stop,” she said.  “You just have to keep going.”

She said she learned that from her best friend Emily Myerson, the 17-year-old CHS soccer player who tragically passed away due to a medical condition.

Just seven months after her passing, Pitts — a defender on the field hockey squad — was devastated again. While chasing a ball, her foot planted and she “stepped weird.” Two weeks later, she found out that she tore her ACL and had surgery on Nov. 15. From there, it’s been small steps in recovery.

“In the beginning of March, I was cleared to start running. Then I started sprinting and about three weeks ago, I was cleared to do side-to-side stuff, going lateral, which is a big step for ACL (recoveries) because that’s when the most pressure is on your ACL,” she said.  “I also got my custom fitted sports brace, which I’ll be wearing in games. I’ve been doing a lot of running, building up my quad muscles, just to get ready. The healing part happens basically by itself, but the work that I have to put in is getting my quad bigger than it was before surgery, so my leg and my knee is really supported.”

Pitts, a two-time Merrimack Valley All-Conference selection, was second on the team in scoring with 28 goals and 14 assists last, while helping the Lions reach the Div. 1 semifinals. In addition, she alternated with then teammate Kate Krueger on the draws.

“I’ve had a couple of ACL injuries myself and she has just worked her butt off trying to get back,” said head coach Ashley Rokas.  “She doesn’t want to miss her senior year and she’s the missing piece to our puzzle right now on our team. We just can’t wait to get her back. Ultimately it’s her hard work and perseverance to get back that has really impressed me so far.

“Julia has just been through a lot and her injury was the icing on the cake. She could have just crumbled, but she took it in stride.”

“Julia’s tall, she’s fast and she’s aggressive. Any time the ball gets to her stick, she’s going to put it in the back of the net. She will also find her teammates, but really it’s her aggression on the field and her level of play that elevates everyone else’s level of play,” the coach said. “She’s just someone who leads by example and everyone else just follows her tracks.”

Those athletic traits come from her family, many with ties to Chelmsford High. Her brother Ben, now a sophomore at UNH, starred in hockey and lacrosse. Their parents Ed and Kelly were athletes. Ed grew up in Chelsea and played hockey and mom Kelly grew up in Chelmsford and played field hockey. Kelly is one of four children to Jack and Jane Fletcher, all outstanding CHS athletes. In 2016, the family tragically lost Jason, who at the age of 43, died in his sleep.

Julia said the generations of sports is something she is extremely proud of and is thrilled that she gets to carry that tradition forward.

“It was never forced, like ‘Hey, you have to play sports,’ but I just loved it ever since I was little,” said Julia.  “My family is definitely really into (athletics). I love getting advice from all of them, two of my uncles and my grandfather just know a lot about the team atmosphere and about winning and losing. They have great advice for it.”

Pitts will join her brother at UNH next year and plans to major in marketing and play club lacrosse.

“I’m really grateful for the opportunity to play athletics here at Chelmsford. The athletic program that we have here is just really great,” said Pitts. “Every team that I have been on, I’ve had such a great chemistry with all of the girls. We just have a lot of fun. More than anything, more than the wins and the awards, everyone just has a great time, whether it’s team dinners, on just team bonding or a fun practice or the bus rides home, it’s just been really, really fun (over the past four years).”

Soapbox races in Greenfield are canceled due to low registration

Roads closed ahead of Boston Marathon

The Fastest Train Surprise You Will Ever See! 4 Old EMD…