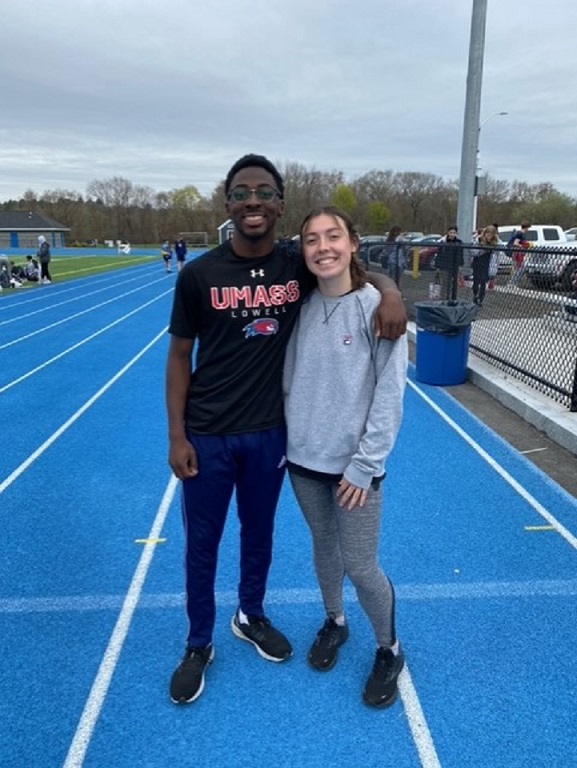 DRACUT — They are close friends who have combined for six individual school records and a number of relay marks. They are among the state’s best in their respective events and have both already qualified for the Nationals.

They have pushed and motivated each other, but Dracut seniors Eythan Luxene or Ava Soucy didn’t realized  they were both interested in the same college. After both being accepted to UMass Lowell, the duo will look to continue to dominate track and field together at the next level.

Luxene holds the best mark in the Merrimack Valley Conference in the triple jump at 44-7. This past weekend at the Div. 4 relay meet, he competed in three running events and finished with two firsts and a second, while breaking two school records.

Soucy has been one of the top sprinters in the league and state over the last few years, but last spring she added long jump to her arsenal, breaking the school record by over a foot in her first attempt.

“Ava’s helped me with having more confidence in the runways and just being a more confident person,” said Luxene. “There’s been times when I’ve been jumping and not feeling myself and she just comes over and talks to me, helping me with my confidence and believing in me saying that I can do it. Then when I help her, I just tell her ‘go out there and win, show the world who you are.’”

Luxene is a former basketball player who tried out for track to get back into shape after an injury on the court and excelled immediately. Last year, he finished second at the sectional meet with a jump of 43-03 before taking 13th at the All-State Meet. This spring, he’s gone to a new level.

“Eythan has our school record in the triple jump with a mark of 44-7 at our first meet of the season. He has since been working to improve his endurance, so he’s been working his way up from the 100 and the 200,” said DHS boys coach Erik Taber.  “This past weekend, he ran the 4×400 so he’s starting to become a little bit more versatile. When he goes to UMass Lowell, I believe their plan is to have him in multi-events because he’s been a good long jumper, triple jumper, he can hurdle a bit (as well as his running events).”

“He’s one of the best leaders to have ever come through the program. He does such a good job of working with the underclassmen, helping them out with their blocks and really making sure that everyone is situated.”.

Right now, Eythan’s eyes are set for something pretty big.

“I want to be the all-state champion (in the triple jump),” he stated.  “I want to be the number one guy and that’s my goal. I’m going to work hard to achieve that goal. I haven’t stopped practicing for days and weeks on end.”

While Luxene has a legitimate shot to be a state champion, so does Soucy. Her league-best jump of 18-4 would have placed her third at last year’s All-State Meet, five inches away from first place. Before turning to the long jump, she was primarily a sprinter and was first in the 100 at both the MVC and sectional meets, and finished 12th at All-States. This past winter, Soucy was first at the MVC Meet in the 55-meter dash and second at the D4 meet and seventh at All-States.

“She’s definitely one of those athletes who as a coach you get maybe once in your career,” said Dracut girls coach Christopher King. “I remember the first time I met her, she was in the middle school as an eighth grader and she knew that I was a sprint coach. She wanted to know where her time would match up (to the varsity team). She said ‘is this good?’ and I said, ‘You would be the fastest girl on our team.’ When you get a kid like that, you just try not to screw them up.”

For over two years, King had tried to convince Soucy to try the long jump. She finally obliged and is hasn’t looked back.

“It’s really nice to know that I’ve made an impact here,” Soucy said.  “Representing my school, breaking records. … of course I love competing. To be able to win and place at the state level has been amazing. I’m looking forward to the states this year to see what I can accomplish.”

Both Luxene and Soucy come from athletic families. Luxene’s father, David played professional soccer in Haiti, and Soucy’s parents both competed in track and field in high school. Both athletes give credit to their families, coaches and teammates for their success, with one fellow Middie in particular standing out.
“Ava’s very competitive. At practice, she brings that energy where (she says) ‘I want to win, I want to work my hardest and work my way to get to the top.’ I like that energy and I’m like that,” said Luxene.

That strong bond and competitive nature should continue in Lowell for the next four years.

“I think knowing that we’re going to the same college has brought us closer and definitely doing jumps together has helped,” said Soucy.  “He’s very encouraging and very helpful.”

Breaks create a positive effect on a person’s mental health

Many turn to planting their own vegetables amid increased…