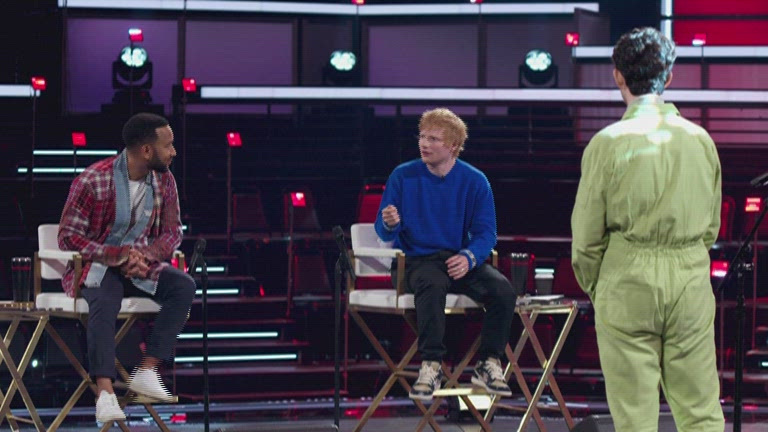 (NBC) – “The Voice” enters the Knockout Round phase tonight and that means they bring in a Mega Mentor for all the artists.

Anticipation is half the fun for the contestants, but finding out who will be the Mega Mentor is even better. The singers who are still getting used to working with superstar coaches, now have a megastar mentor, Ed Sheeran.

The quest to win “The Voice” continues tonight with Sheeran providing some knockout guidance.

“Sometimes the runs that you do take away from the emotion of it, so I’d say don’t try and overcomplicate it,” he suggested to one of the singers. “With a song like this, simple is so effective.”

He also provides some inspiration, telling the contestant, “Every single record label told me no at least three times. The one I’m signed to told me no twice.”

And some of Sheeran’s support is not just for the artists.

“I’ve known Ariana, for like, a long, long time. We’ve worked together on songs in the past. We’ve jammed. It’s going to be a good first season for her,” he said about working on the show alongside the newest coach, Ariana Grande.


When is trick or treat in Columbus, central Ohio? Times for 2021

The artists are hoping it’s an even better season for them.

“The Voice” airs tonight at 8 p.m., followed by a new episode of “Ordinary Joe.”

Neighbors in Tennessee city worry as Amazon packages pile up…

US, Bulgaria meet over NATO obligations

PHOTOS: Injuries reported after car crashes into tree in…

New England preps for 1st hurricane in 30 years with Henri