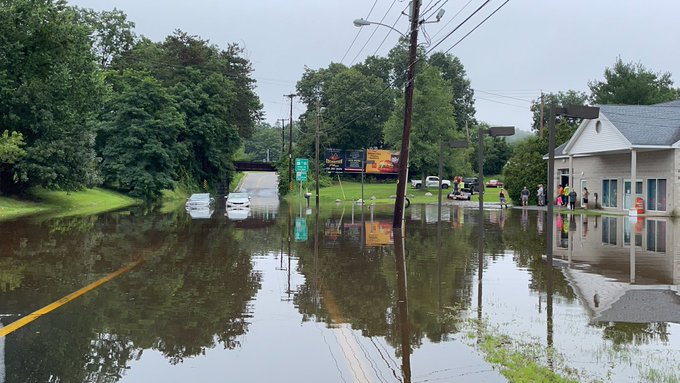 The Quaboag River emptied out into Route 2 in Palmer, so the road closed, but not until two vehicles got stuck.

Unfortunately this is what can happen when you try to drive through flooded roadways. The two cars were submerged in water that’s several inches deep.

Mike said, “With those rainboots you have no problems, walking through water.”
Jessica Allen replied, “As you can see we call it DIY, get it done baby.”

Jessica’s father and brother own Bailey Motors, which happens to be located adjacent to where the vehicles became trapped.

“When we arrived to check on our building, we found two cars submerged an one of the owners was here and we offered to pull her out because the tow trucks wouldn’t take the risks, I guess to go into the water and pull in, said Allen. “We have no problems pulling vehicles out, because we are doing it ourselves.”

With likely more rain ahead, they are taking a proactive approach, moving cars and other valuables out from inside their shop, and onto higher ground, using a hill their neighbors are letting them use for the time being. At this point, Jessica said all they can do is take it one day at a time.

Mike said, “Your family’s business is on its own island now.”
Jessica replied, “Yeah isn’t that kind of cool maybe we should rename it, but what’s cool here is seeing family coming together. When My dad called for helped every single one of us came out to help. When something has to get done we get it done.

Tips for last-minute Christmas shoppers in Massachusetts to…

Tailgating, face-painted fans back in force at NFL stadiums…

Sheriff has choice words for man who recorded young girls in…

Northampton man placed on probation in connection to deadly…

Bounty hunters kidnapped a man for ransom — and police…