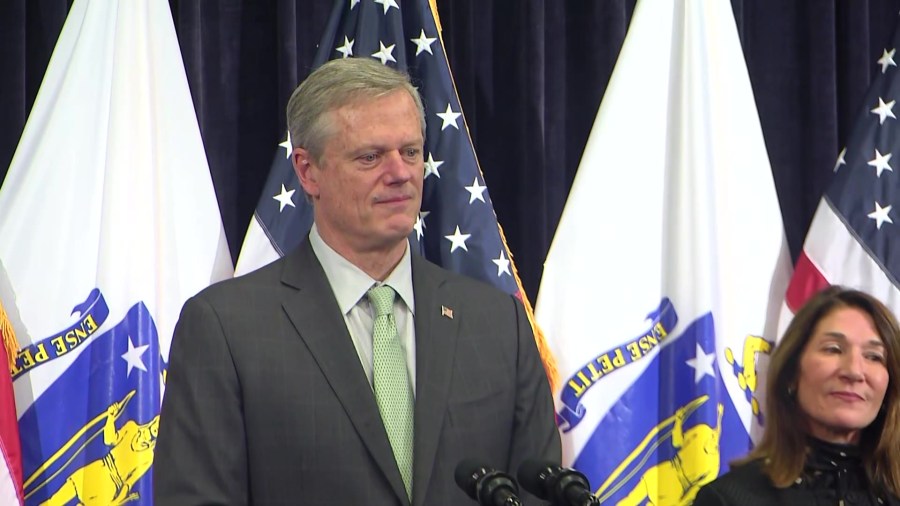 BOSTON, (WWLP) – Governor Charlie Baker held a news conference Tuesday offering an update on COVID-19 in the state and discussing measures to support the healthcare system.


Gov. Baker says no plan to bring back mask mandate

Governor Baker was joined by Health and Human Services Secretary Marylou Sudders. The Baker Adminsitration Tuesday reinforced thier policy regarding vaccines, boosters, and masks. Baker in questions following his statement, reiterated his stance to keep children enrolled in in-peron schooling, and to not issue a mask mandate.

Bringing in the National Guard

In addition to the infromation mentioned above, Governor Baker announced Tuesday his decision to utilize the state’s National Guard. Up to 500 members of the Massachusetts National Guard will be called to address the non-clinical support needs of hospitals and transport systems. Up to 300 of these Guard members will begin training this week and will support 55 acute care hospitals, and 12 ambulance service providers across the Commonwealth.

Accordsing to a statement sent to WWLP by the Governor’s Office, the Department of Public Health has surveyed all hospitals and ambulance service providers in the state to identify five key roles that non-clinical Guard personnel can serve in support hospital operations. These points are:

The Massachusetts National Guard will be deployed to the field beginning December 27th, 2021.

DPH, in that same statement sent to WWLP, released an updated mask advisory. The advisory recommends that all individuals, regardless of vaccination status, wear a mask or face covering in indoor, public spaces. This adivosry does not impact prexisting mandates or lack there of. Governor Baker has stated that he has no interest in enacting a mask mandate due to the other resources availible at this time.

Edelman says return to Gillette Stadium will ‘hit my soul’ –…

Crews may have discovered 1887 time capsule under…

Woman's car shot at on Route 1in Peabody

Tips to help calm your pets during New Year’s Eve…