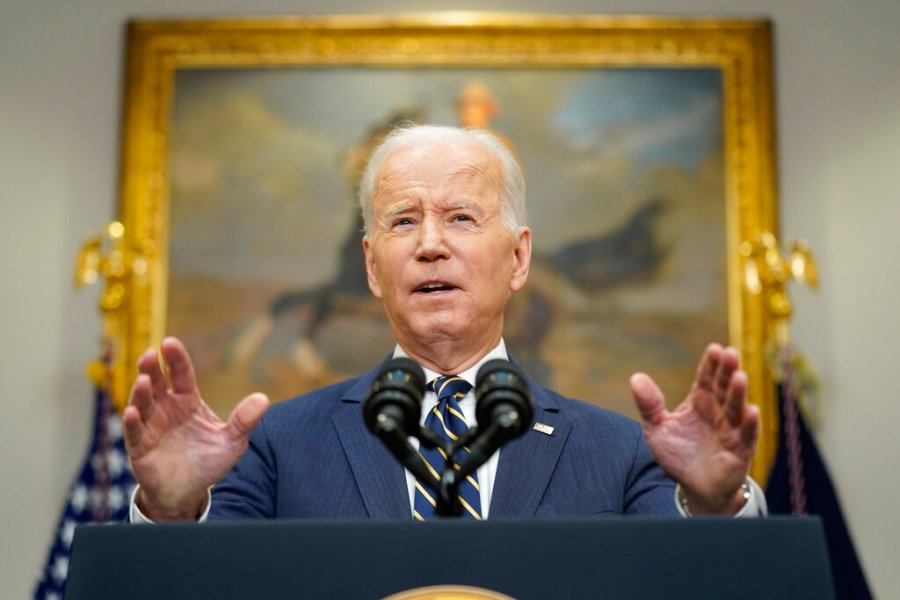 (The Hill) – The House on Thursday passed a bill to end normal trade relations with Russia and Belarus as the U.S. and its allies tighten the economic vice on the Kremlin.

Lawmakers voted 424 to 8 in favor of legislation to raise tariffs on goods from Russia and Belarus and give President Biden power to impose even stricter import taxes on their exports amid the ongoing invasion of Ukraine. The eight lawmakers who voted against the bill are all Republicans.

The bill also sets up strict guidelines for when the president can restore normal trade relations with Russia and Belarus based on the state of the Ukraine war.

The Biden administration will additionally be obligated to push for Russia’s removal from the World Trade Organization and oppose Belarus joining the group, which would subject both to higher tariffs and steeper trade barriers.

“The Congress today will take another step in lockstep with many of our allies, as is the Biden administration, to tighten our stranglehold on the Russian economy,” said Speaker Nancy Pelosi (D-Calif.) in a speech on the House floor Thursday. She called the legislation “an intense action to further isolate Russia and decimate its economy.”

The House vote comes less than a week after Biden announced the U.S. and Group of Seven nations would end normal trade relations with Russia and Belarus. The president also imposed a ban on Russian oil imports last week, though U.S. allies have declined to cut themselves off from the Russian energy sector.

The bill now heads to the Senate, where Majority Leader Charles Schumer (D-N.Y.) said Thursday he plans to get the bill to Biden’s desk as soon as possible. Republican lawmakers have expressed concerns about an expansion and renewal of the Global Magnitsky Human Rights Accountability Act included in the bill and are pushing to add an explicit ban on Russian oil beyond Biden’s executive order.

Several lawmakers cited Ukrainian President Volodymyr Zelensky’s gripping address to Congress on Wednesday, which included a heart-wrenching video of the destruction wrought in Ukraine by Russia, in their remarks supporting the bill.

“Any American watching President Zelensky yesterday knows much more is required of us,” said Rep. Kevin Brady (R-Texas), ranking member on the House Ways and Means Committee, in a speech on the House floor before the vote.

“This step today is crucial in our defense of Ukraine, the Ukrainian people and democracy.”

Biden has faced a careful balancing act while helping to lead a coalition of countries behind unprecedented economic sanctions on Russia. Lawmakers in both parties have pressured the White House to impose increasingly strict penalties on Russia, often beyond the initial comfort level of Biden and his European allies.

Members of Congress have successfully pushed Biden away from his previous resistance to stricter penalties on the Russian financial system and an embargo on Russian oil, saying the domestic cost is worth defending Ukraine. Russia’s ceaseless shelling of Ukrainian cities, which has claimed thousands of civilian lives, has also galvanized support for stronger economic penalties.

While the U.S. has faced higher gas and food prices because of the war in Ukraine, European nations are far more dependent on Russian exports and will experience much steeper economic blowback from sanctions. Biden has repeatedly stressed the importance of unity among the U.S. and its allies as it imposes penalties, which experts say is part of why the current sanctions regime has been so effective.

“I’m pleased that the White House now feels comfortable moving forward with this legislation, and it is important that we are moving in concert with our allies. But I think we need that sense of urgency based on what we heard again yesterday from President Zelensky,” said Rep. Earl Blumenauer (D-Ore.), who co-sponsored an earlier bill to end normal trade relations with Russia and Belarus and ban Russian energy imports.

Ending normal trade relations with Russia and Belarus means exports from those countries will no longer receive the lower tariff rates the U.S. imposes on goods from friendly countries. Higher import taxes on Russian and Belarusian goods will likely make those products more expensive for consumers than similar ones from other countries, which could reduce their U.S. sales.

The bill passed by the House also gives Biden the ability to impose additional sanctions on top of the ones Russian and Belarusian goods would already be subjected to under current U.S. trade law.

To restore normal trade ties, Biden would be ordered to “consult” with the House Ways and Means and Senate Finance committees, the congressional panels with jurisdiction over trade policy. The White House would also need to certify that Russia and Belarus agreed to end the occupation of Ukraine, that the two countries would pose no immediate threat to NATO countries and that Ukraine is able to freely elect its government.

Trade and sanctions experts say the bill would have limited direct impact on the Russian economy. The U.S. imports very little from Russia other than energy products, vodka and seafood — all of which have already been banned by Biden — and dozens of American businesses have already begun to pull out of Russia. Even so, the measure in concert with similar bans in Europe would strike another symbolic blow against Russia and push it further outside of the global economy.

Rep. Victoria Spartz (R-Ind.), the first Ukrainian-born member of Congress, said targeting Belarus would deprive Russia of a “loophole” around sanctions and warn other countries who support Moscow’s belligerence.

“They can’t just go kill a bunch of people, destroy cities, kill women and children and then go back and have business as usual. Congress is sending them a very strong message: If they want to have peace, it better be soon and they better get to the table and stop this insanity and killing of the Ukrainian people,” Spartz said.

Woman sentenced to state prison for homicide in Adams

Pediatric COVID-19 vaccine clinic to be held at Easthampton…