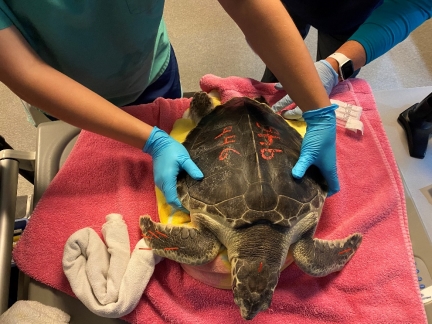 BILOXI, Miss. (WWLP)– A Kemp’s ridley sea turtle that had been found stranded and injured on Cape Cod has been returned to warmer ocean waters.

Given the name “Typhoon,” the endangered turtle was found in December 2020 off of Orleans, suffering from pneumonia, anemia and a low heart rate, as well as bacterial osteomyelitis, a bone infection. The turtle was treated for 10 months at the New England Aquarium’s Sea Turtle Hospital in Quincy, MA. Typhoon and another turtle were then sent to the Mississippi Aquarium to complete rehabilitative care before being returned to the ocean.

“We are grateful that the Mississippi Aquarium was able to continue the turtle’s rehabilitative care and thrilled that it was healthy enough to be released back into the ocean. This is a huge success story and a testament to the vast, collaborative network of sea turtle rescue partners,” said Dr. Charles Innis, Director of Animal Health at the New England Aquarium.

More than 500 live sea turtles stranded during the 2021 cold-stun season on Cape Cod. The season got off to a late start due to temperature fluctuations that kept Cape Cod Bay warm. Larger loggerhead sea turtles continued to wash ashore, still alive, into the new year.

Water shutdown scheduled in area of Fuller Road in Chicopee

Biden says nation weary from COVID, but US in a better place…

Here’s when gas prices are expected to peak in 2022

Ghosts of America's Past: Buildings of the Kirkbride…

Best post-Black Friday deals in case you missed out

Colon ready for next round at New England Golden Gloves –…