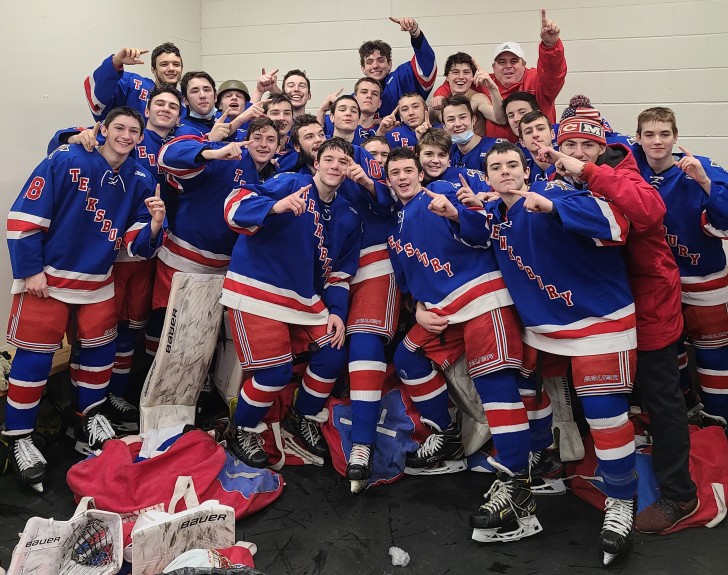 The Redmen’s offense kicked into overdrive in the second period. Aaron Connelly potted the hat trick, including the eventual game winner in the second period. Forward Sean Lane levied a goal and added an assist. Defenseman Nick DiCioccio chipped in with a pair of helpers. Fellow blueliner Cade Connors (three points) iced the game with an unassisted tally in the third period.

With the win, Tewksbury (13-0 MVC/DCLII, 17-2 overall) solidified its top-ranked seeding in the Division 2 bracket, and are scheduled to face 32nd ranked Melrose, date, time and venue TBD.

Sporting a three-point night, Parreira factored in all of the Crusader’s goals, setting up Alex Pescatore on a pair. Patrick Drew and Jake West also picked up helpers. That was all the offense goalie Vinny D’Urso would need making 21 saves for the shutout. He was backed by the stellar defense of Danny Kierce on the blueline.

Aaron Connelly netted the hat trick, including the game winning goal in the second period, as Tewksbury crushed Concord-Carlisle, 7-2 Feb. 24.

Needing just eight points to eclipse the four-digit club, Mallinson wasted little time helping his team establish a 37-34 lead at halftime. Led by Pete Pavlakos (10 points), the Tigers kept things close for much of the first half, before Wilmington pulled away. The Wildcats were fronted by Anthony Nicosia (10 points) and defensive stalwart Jimmy O’Keefe (eight).

Hundreds of thousands of Americans still without power in…

Getting Answers: How Police bodycam footage aids in…

NFL and XFL collaborating on player safety and health data –…

NEN Keys to the Game: Keys for the stretch run

The 10 States With the Highest Asian population.