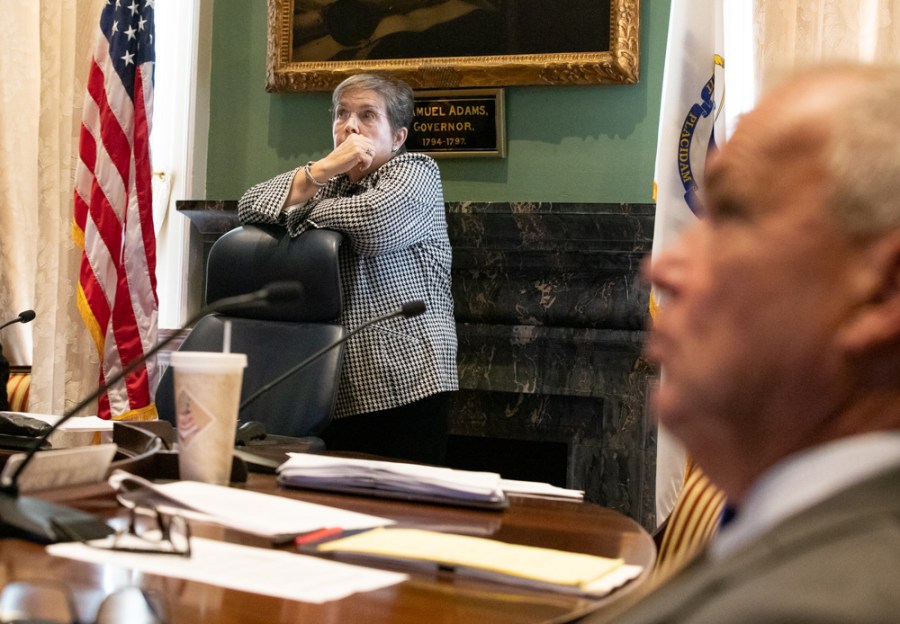 BOSTON (SHNS) – While the State House remains closed, an elected body that meets there has stopped livestreaming its gatherings — traditionally open to the public — where members vet Gov. Charlie Baker’s judicial nominees.

For nearly a year and a half, the Governor’s Council has broadcast its nomination hearings and formal assemblies live on YouTube. That practice ended Wednesday with a bizarre pointing of fingers.

As the eight elected councilors opened a public hearing for Lenox lawyer Nicholas Parsenios, one member of the public was able to watch virtually: retired Judge Anne Geoffrion, who was able to tune in because she was providing testimony in support of Parsenios’ nomination to the Probate and Family Court bench.

Two other witnesses, Amy Koenig and Elizabeth Quigley Esq., attended the hearing in person within the governor’s office suite to register their support for Parsenios’ confirmation as a judge. There were no witnesses in opposition.

As the panel broke for lunch, Councilors Christopher Iannella of Boston, Robert Jubinville of Milton, Terry Kennedy of Lynnfield, Marilyn Devaney of Watertown, and Joseph Ferreira of Swansea told the News Service they were unaware that the livestream had been disabled.

“I don’t know if it is or isn’t,” said Ferreira. “We haven’t voted on it … I thought that stuff was livestreamed.”

There was no clear answer about who made the decision to cancel the public livestream, which enables anyone to watch the council’s proceedings online.

“Governor’s office controls that. We didn’t put it in, they did,” said Kennedy, referring to the fact that Baker’s office provided the technical support to set up initial livestreaming activity last year.

To which Jubinville said, “They run the show.”

A Baker spokesman on Wednesday disavowed the governor’s role in the decision-making process about livestreaming council meetings and pointed out that the council was an independent body.

Ferreira and Kennedy said that the council had not had any discussion about changing its livestream habits.

Western Massachusetts Councilor Mary Hurley, whose commute is the longest of the councilors, chuckled and said, “You think I want to come to Boston and talk about livestreaming? I didn’t even know what it was.”

To Devaney, livestreaming council meetings was “the best thing that ever happened.” The Watertown Democrat said she was in “1,000 percent support” of streaming meetings online so that the public that elected the councilors could follow their activities.

A typical Wednesday for the council includes one or two hearings on Baker’s recent nominations, which could include potential judges, lifetime clerk magistrates, or Parole Board members. Around midday, councilors convene a formal assembly to vote on the Treasury warrant, which authorizes the state to pay its bills, and confirmation of pending nominees.

Two councilors tied the necessity of online streaming to the ability of the public to attend in person.

Councilor Paul DePalo of Worcester said that “there needs to be a way for the public to access the hearing” if they are unable to access the physical meeting site. He said he had checked earlier Wednesday and noticed that the livestream was not active.

Jubinville said he “maybe” supported continuing the broadcasts, if the public were unable to enter the State House.

In pre-pandemic times, council meetings attracted curious onlookers, occasional impassioned advocates, and a crew of regular attendees, some of whom documented council activities for their online followers.

On his blog earlier this week, Perry wrote that he believed the council’s livestream would soon be ending.

“However, the meetings are held in the Statehouse which remains closed to the public, causing a problem to open meetings which the public can not attend or watch,” Perry wrote. “It seems reasonable that concerned people should contact Robert Ross, Chief Legal Counsel.”

Open to the Public?

But, said Councilor Terry Kennedy, the State House is open to the public — for council purposes.

Kennedy agreed with some of his colleagues that a livestream is important if the building is closed.

“But we’re not closed to the public,” the Lynnfield Democrat said. “The public’s welcome to come in here right now. … If Wayne Perry wants to come in, he can come in. … All you’ve got to do is put your name on a list and you can come in.”

Kennedy said that members of the public who desired to watch the council’s hearings or public meetings could call the council office and add their name to a list that would get them through the security checkpoint at the State House on the day of the meeting.

The Bureau of the State House, an executive agency that administers the building, continues to display an alert on its website that “The Massachusetts State House is closed to the public until further notice.”

“All I know is that I don’t know,” Devaney said. “And to me, I want to know what is the purpose of that decision? To keep the public out? Don’t let them know who’s going on the bench, who’s going to the Parole Board?”

Dozens of workers trapped after collapse at Amazon warehouse…

Kicker Quinn Nordin living out a dream playing for the…