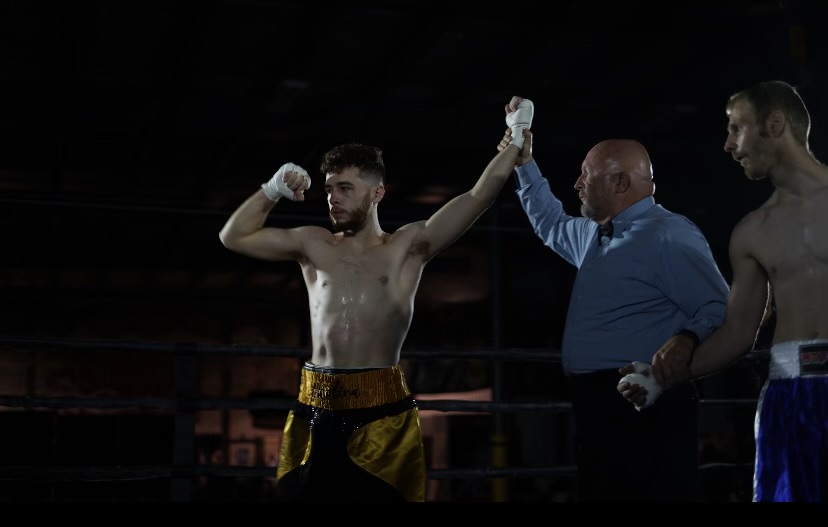 Nick Molina unleashed his unbridled spirit boxing in the Bluegrass State, adding another knockout to his ever-growing resume.

The Lowell-based boxer, “Saint” Nick defeated Andy Locker in a first-round knockout at Hits 55 Sports Complex, April 16, in Clovington, Kentucky. With the win, Molina, 22, improved his professional record to 9-0, with three knockouts.

Molina and his trainers made the long 13-hour drive from Lowell to the Blue Hills of Kentucky for what ultimately proved to be 1:36 of action.

“It was well worth the trip,” said Molina.

Fighting in a different area code only added an extra dimension to the bout.

“It felt exciting fighting in front of a different crowd and different environment,” said Molina, who has fought exclusively in the New England area up until this point. “I liked being able to fight outside of my comfort zone and out of my hometown area for the first time in my professional career.”

“It was like a new challenge for me,” he added. “But I was able to stay focused on the fight and on the task at hand.”

Midway through the round, Molina found his opening with a solid combination. He landed a sharp left jab to the head, before delivering another crushing body shot that brought Lockner to his knees, promptly stopping the fight at 1:36 of the opening round.

“I knocked him down with a body shot multiple times,” Molina said. “The third time was when it was called off.”

It was his third knockout of his pro career, and first since dropping Joao Borrges Mendes in 21 seconds, Aug. 6, 2021.

“Our game plan was to work the body and that’s exactly what I did,” said Molina. “My opponent came out swinging. That’s what we predicted would happen, so we were prepared to just weather the storm and stick to the game plan. Everything went exactly as planned.”

Born and raised in Lowell, Molinia has been boxing the past 10 years. The Greater Lowell Tech graduate caught the boxing bug after watching the Mickey Ward biopic “The Fighter.”

For Molina the biggest rush comes as he makes his way to the ring.

“It’s nerve-wracking,” Molina admitted. “But the closer you get to the ring you just get more and more confident. You remember all the training and all that you’ve gone through. Once you step into the ring, you’re just ready to go.”

Molina now turns his attention to his next fight, and arguably biggest test to date, going up against Alejandro Mignoni (14-4) May 21, in Portland, Maine.

“It’s going to be a big test for me going up against an opponent with 14 wins and only 4 losses,” said Molina. “I’m ready to prove myself and improve my record to 10-0.”

And so far, so good.

Frigid cold temperatures in western Massachusetts over the…