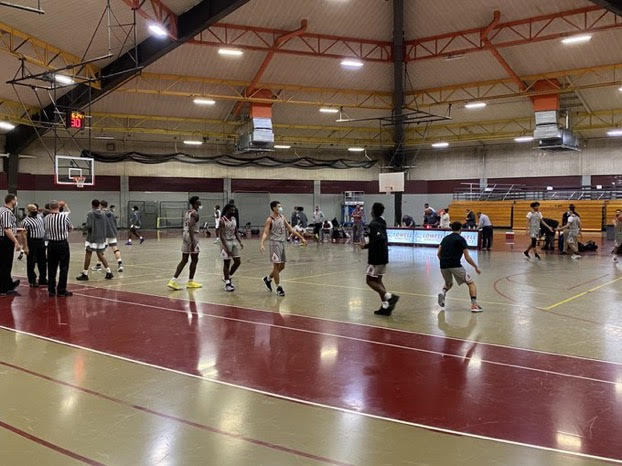 Drea Defreitas netted 12 points, as the Lowell girls hoop team closed the door on the Ray Riddick Field House with a big win over Malden.

Fiona Haley added eight points in the win, in what was the final high school basketball game to take place at the old barn.

Named after Lowell High legend Raymond Ernest Riddick (’35), a former NFL player and coach with the Green Bay Packers (1940-42, 1946), the venue originally opened in 1986, the same year he was inducted into the Lowell High School Athletic Hall of Fame.

After leaving the Packers, Riddick returned home to Lowell as head coach of the Lowell High football team, building up the Red Raider’s program as a nationally recognized powerhouse. He coached his alma matter for 28 years until 1976, where he guided Lowell High to three national football championship playoff berths, and 10 undefeated seasons.

Senior guard Abby Chambers swished a three with five seconds left to give WA a come-from-behind victory over host Mansfield, in the first round of the Mansfield Roundball Classic.

Down 54-48 with 1:30 to go, senior Tamar Almasian hit a baseline jumper, before Carly Davey hit Alanna Saunders with a pass that led to a short bank shot. WA got a hold and Davey sped down the court, hitting Chambers for the game-winner. Davey led the Ghosts with 23 points and nine assists.  Kate Barnes anchored the middle with 14 points and eight blocks.  Chambers kicked in 11 points.  WA (13-5) plays state power Bishop Feehan on Wednesday, Feb. 23 at 5:15 p.m.

Central (15-4) held a commanding 35-18 lead at halftime, sparked by the heady play of Claire Finney (11 points, five rebounds, three assists) and Lenny Veloz (12 points), both of whom were name to the All-Tourney Team.

The Tigers were powered by Bryn Goulet (23 points) and Carly Dimento (12). Littleton was led by Hannah Cochran’s team-high 26 points, with Kaylin O’Meara (11 points) and Maddie Shufrin (11) also finding the basket.

The Skippers advanced to the final to play Greater Lowell Tech in the Skaff Winterfest at Lowell Catholic.

The Crusaders were led by junior Catherine Antwi with 11 points.

BG grabbed a 3-0 lead at the end of the first period, with Ryan Jolicoeur setting up a pair, including Dylan Lokin’s eventual game-winner with 6:56 remaining in the stanza. Mitchell Lynch and Sam Clauson each had a goal and an assist, with Brian Jenkins also earning two helpers in the win.

John DeFonzo scored the hat trick, including burying the eventual game winner at 4:58 of the first period, as Grafton levelled Littleton, Monday afternoon.

Holding a slim 1-0 lead at the first intermission, Grafton came out guns-a-blazing in the third period scoring six unanswered goals in the final 10 minutes of play.

In earlier action, it took Tyler Edwards 28 seconds to give Littleton all the offense it would need in an 8-0 win over St. Bernard, Sunday.

Littleton exploded for four goals in the first, a power play tally in the second, and three more in the third in the blowout victory. Ethan King and Dean Blake each potted a pair of goals. Tyler Edwards and Zack Lizotte each levied a goal and an assist. Sam Dunn netted the other goal. Evan Piekos added three assists, with Colin Murphy earning two helpers. Ryan McNaulty and Ryan Johnson had the other assists. Littleton outshot its opponents 47-11. Goalie Tyler Proteau made 11 saves for the shutout.

Lowell Catholic goaltender Mason Phillips made 33 saves, but his team was unable to answer back as they beat by Fenwick.

Central Catholic goaltender Michael Brothers made 20 saves, but his team was unable to contain Malden Catholic.

After a scoreless first period, the Lancer jumped out to a 3-0 lead by the second intermission. Central’s (9-7-4) lone goal was scored by Charlie Winship.

More than $1.5 million worth of marijuana found in Holyoke…

No stars and stripes? Reimagined US flag sparks outrage

Quincy mayor chosen for new MBTA board of directors

Why are 2 identical Massachusetts vehicles getting different…

Blustery & cold today but the sun is back | Weather

Car crashes into building in Chicopee