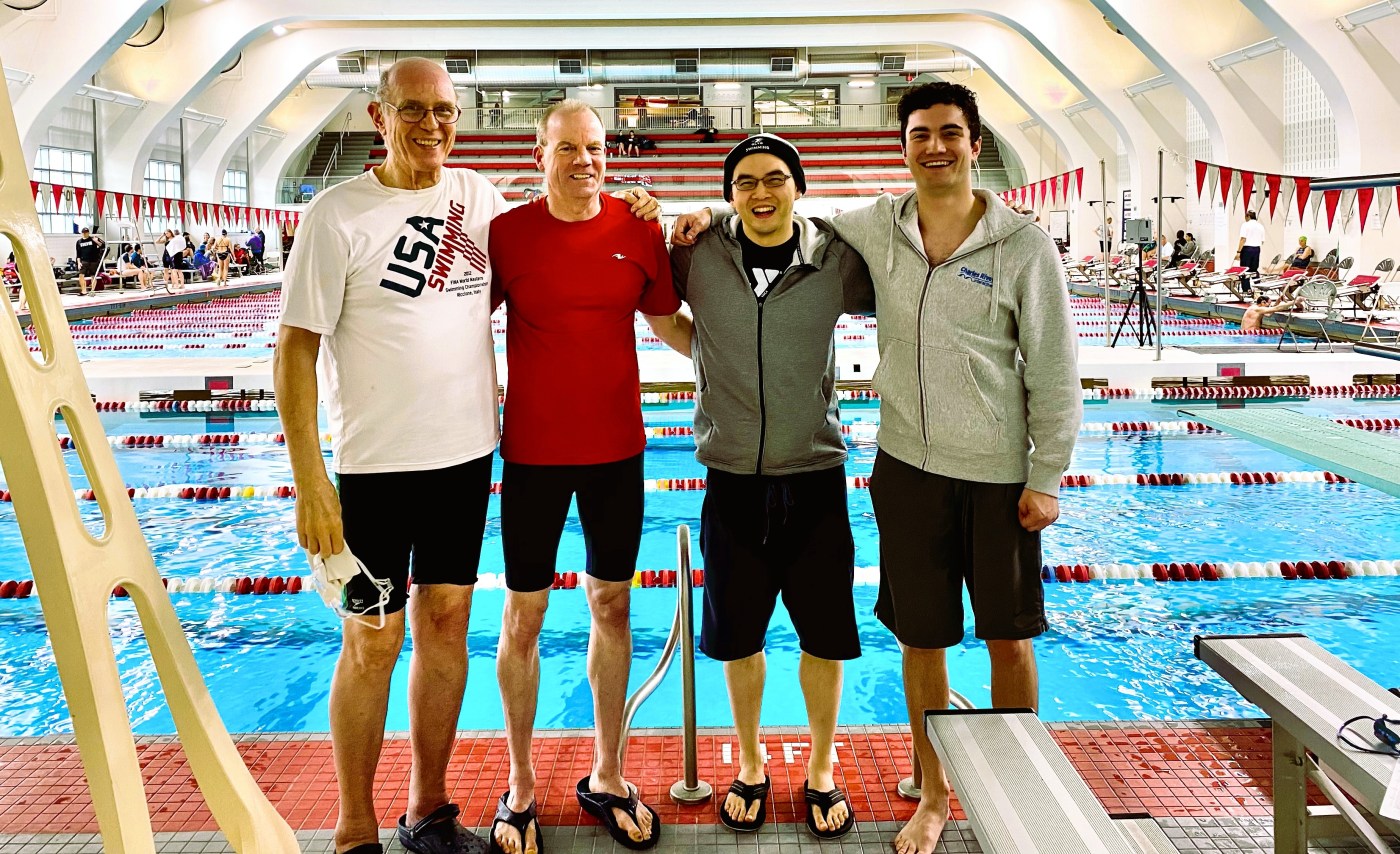 Four swimmers from the Lowell YMCA Masters Swim team made waves while participating at the New England Short Course Championship meet at WPI, April 1-2. Locals Nick Bonnabeau, David Fei, Kevin Sullivan and Jim Pope, made quite the splash both individually and as a team, compiling 395 points ranking 14th out of all 40 teams. The quartet finished fifth among the eight teams with 4-8 swimmers, and first among squads of four or fewer. Not bad for a tourney debut.

“I thought we did quite well,” said Pope, 79, the coach and captain of the team. “We did better than a lot of larger teams. I had not seen David and Nick swim before, so I didn’t know how good they were. They were very good.”

“It feels good,” said Fei, a former Chelmsford High swimmer. “It’s hard to predict how you’ll do a head of time, because it’s all people who are essentially retired swimmers. It’s like New England weather, you never know what you’re going to get.”

“It was my first meet in years,” he added. “I was really excited for it and had a blast. I was tired afterwards, but a good kind of tired.”

In addition, the team also joined forces to take third in the 200-yard medley relay with a time of 2:15.66.

“We did a lot better than I thought we would,” said Sullivan. “It was a typical swim meet. It was fun, just a bunch of old people pooling around.”

Born in Lowell and raised in Chelmsford, Sullivan’s family was never far from the water.

“I was one of eight children, all of us swam,” said Sullivan, who first began swimming competitively at the age of nine. “We belonged to the Summer Swim and Tennis club in Chelmsford and one thing led to another. From there I went to the Lowell YMCA and just kept involved in it because I enjoyed it.”

“He was actually one of my swimming coaches when I was six years old,” said Fei. “He’s known me all my life.”

Born in New Jersey and raised in Illinois, Pope has lived in nine different states, as well as England and Germany, before settling in Lowell in 2015.

“I married a woman from Massachusetts,” he said.

Pope first took the plunge while swimming competitively in high school in 1956, before taking almost a decade long brake following college graduation. He rediscovered masters swimming in 1975 and has been a regular in the circuit ever since. His effort over the weekend only proves that he has a few more laps left in the old odometer.

“I was pleased,” said Pope, who broke his hip a year ago in a bicycle accident. “It was a test for me. I was unsure how it would affect my swimming. My hip hasn’t completely recovered, but the breaststroke kick seems to have suffered the most.”

Luckily for him, his new recruits have helped pick up the slack. Bonnabeau and Fei gives the team the young blood they were searching for.

“Since I retired from college teaching, I haven’t had a lot of contact with younger people,” said Pope. “Those two are a delight to know and be around.  In addition, they’re good swimmers and love swimming.”

Bonnabeau recently moved to Lowell and dipped his toe back into the water to stay in shape.

“I was just looking for some measurable way to see how I was doing,” said Bonnabeau. “I heard about a master’s team, so I got in contact with Jim. From there I recruited Dave who has been swimming around the same time as me. I noticed he was pretty quick. I told him about the team. He signed up, and the rest is history.”

Add in the savvy veteran experience of Sullivan, and you have a multi-dimensional team with multi-generational character.

According to Fei, watching Pope and Sullivan compete at such a high level at their ages is something he aspires to do.

“It’s very inspirational,” said Fei. “I’d be lucky to swim as well as they do 10 years from now. Jim’s approaching 80, and I would be ecstatic to move as well as he moves in the pool. You’d never guess he’s 79, just seeing him swim. I think part if it is that lifestyle, staying active. It’s very beneficial and a good thing for people to see. It’s a testament that if you put the time and effort into it, you can achieve things you never thought you could do.”

Before breaking his hip, Pope had planned on swimming in his sixth World Championships in Japan. Now on the mend, he’s aiming to swim in the long course nationals in Richmond in August.

“Under FINA rules, I will be 80 then, so I will be the youngest in my age group,” said Pope.

In the meantime, however, the Lowell master’s team will continue to perfect its craft possibly pooling their resources again when the time is right.

“I got that itch scratched this weekend, but I’ve got to admit I’m a lot itchier now,” said Fei. “I want to compete again, but I think that’s just from growing up as a competitive swimmer. You always have that competitive itch. At the end of the day, it’s all about staying healthy and having fun. It’s a sport I’ve loved all my life. It just becomes a part of you.”

And as he’s learned from his teammates, a lifelong commitment at that.

Mac Jones is the Patriots’ future; Will he be their present,…

Prepare for IVY League Colleges: How to Stand Out on Your…