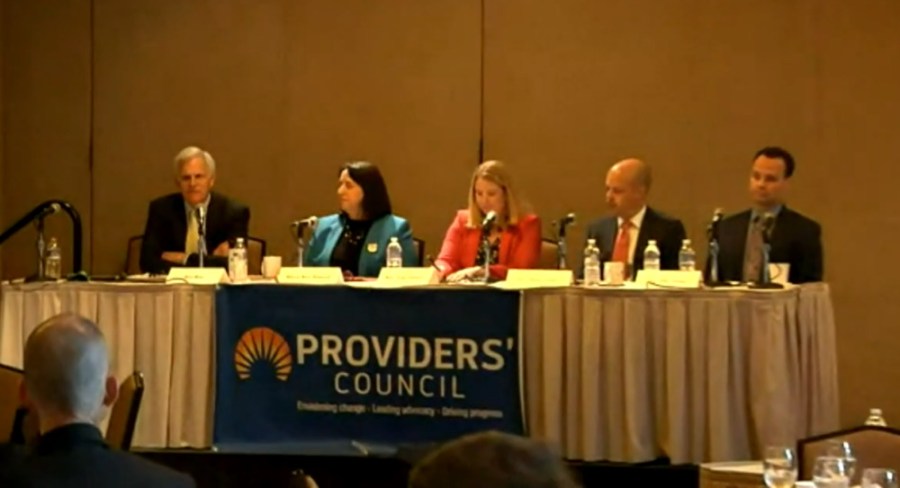 BOSTON, Mass. (SHNS)–There was a lot of overlap and agreement among the Democrats running for lieutenant governor during a Providers’ Council forum Monday afternoon as each of the five candidates sought to convince human services providers that they would be their best partner in the corner office.

The industry that helps to care for Bay Staters with intellectual or developmental disabilities, mental health challenges or substance use disorder has struggled for years to attract and retain workers due to the combination of lackluster pay and the difficult nature of the work. As a result, many providers operate with limited capacity and others are closed, leaving some families and individuals without the services they need and qualify for.

“There is no plan B. We use the word crisis a lot; this actually truly is a crisis, that we don’t have enough individuals to service our most vulnerable population, period,” Kim Driscoll, the mayor of Salem, said during a forum hosted by the Providers’ Council at Worcester’s Beechwood Hotel on Monday.

For Driscoll and most of the other candidates on the dais, helping the human services sector and its more than 180,000 workers starts by increasing the state’s Chapter 257 rates for health and human service workers. “We can adjust the Chapter 257 reimbursement rates, we can and we should demand that we have pay equity for government- and community-based reimbursement rates. I mean, this isn’t rocket science. We know the problems and we know how to get there,” Sen. Adam Hinds, who said that taking full advantage of the opportunity presented by federal aid and surplus state tax revenue is a central part of his candidacy, said. He added, “I’m really sick and tired of the answer and the pushback being, when you put up big-ticket items like this, ‘Oh, this is one-time funds that we’re dealing with.’ OK, great. Tell me how much we need to pay for these things and I guarantee I can find it.”

While Hinds proposed that the state come up with the money to invest in the human services workforce by scrutinizing corporate tax expenditures, Rep. Tami Gouveia suggested that the money to boost the care sector could come from new taxes. “I fundamentally believe that we have the resources in our state and we’re just not using them correctly, and we are not taxing all families and all businesses in the ways that we need to to make the critical investments,” she said. “It’s why we have had a child care workforce shortage even before COVID hit, it is why we have had a social work and human service provider shortage even before COVID hit, and we know COVID has made it even more difficult.”

Sen. Eric Lesser pointed to work he’s done in his eight years as a state senator and said as lieutenant governor he would work with providers to “put a game plan together for how we build on what we’ve already got.” “We did a student loan repayment piece in the ARPA budget that we did a few months ago … to excuse the loan debt for human service workers. There’s about $30 million and we’re estimating that it’s going to help either recruit or retain as many as 2,000 human service workers, in particular behavioral health, statewide. Now we know that’s a drop in the bucket compared to where the need is, but we have a template for what we need to do. We got $30 million in last budgets, we have a budget coming up now,” Lesser said.

The human services sector will undoubtedly be watching very closely as Hinds, Lesser and the rest of the Massachusetts Senate work through its fiscal year 2023 budget bill later this month. The House budget that passed last week, like Gov. Charlie Baker’s budget proposal, included $230 million for Chapter 257 rates for health and human service workers, an increase of $151 million over the current budget.

The Collaborative, a group of four Massachusetts human services professional associations, said it appreciates the $230 million investment to boost salaries, but “it will not be enough to provide competitive wages for agencies to recruit and retain staff.” The organizations were seeking a total of $581 million in funding to bring direct care worker salaries up to $20 an hour.

“Many employees are forced to leave jobs because salaries — which are established based on reimbursement from the state — are below wages offered by other employers. Staff vacancies jeopardize access to critical services for people with disabilities, mental health diagnoses, or those experiencing challenges like homelessness or abuse,” the Association for Behavioral Healthcare, Association for Developmental Disabilities Providers, Children’s League of Massachusetts, and the Providers’ Council said last week in a joint statement. “The Collaborative urges the Senate to increase the FY23 rate reserve to $581 million to enable providers to pay $20 an hour for direct care jobs and ensure access to safe, quality care in communities across the Commonwealth.”

Businessman Bret Bero told attendees that who they choose to serve as governor and lieutenant governor will have an enormous influence over how the next decades go for the industry and for the state. He said he sees “a coming economic storm” with inflation at a 40-year high, interest rates on the rise and most of the major global banks forecasting a recession in 2023. “And as all of you know, when that happens, your sector feels it first. And so you’re going to be in more demand,” Bero said. “The next administration will define what the character of the commonwealth is, not only for our lifetime but for our next generation. And I think the key question, therefore, that we confront is what sort of team do you want to have lead the commonwealth going forward?”

Massachusetts to launch the use of body cameras in prisons |…

Numerous tornado warnings in the Carolinas

Hot and humid again Friday, then some relief | Weather

Mainly Dry and Quiet through Midweek, Turning Unsettled by…

Avoid the holiday panic: Have you finished holiday shopping?

Hampton Beach NH – My Very First Time Swimming On The…

Bruins players lend support to former NHL player who made…