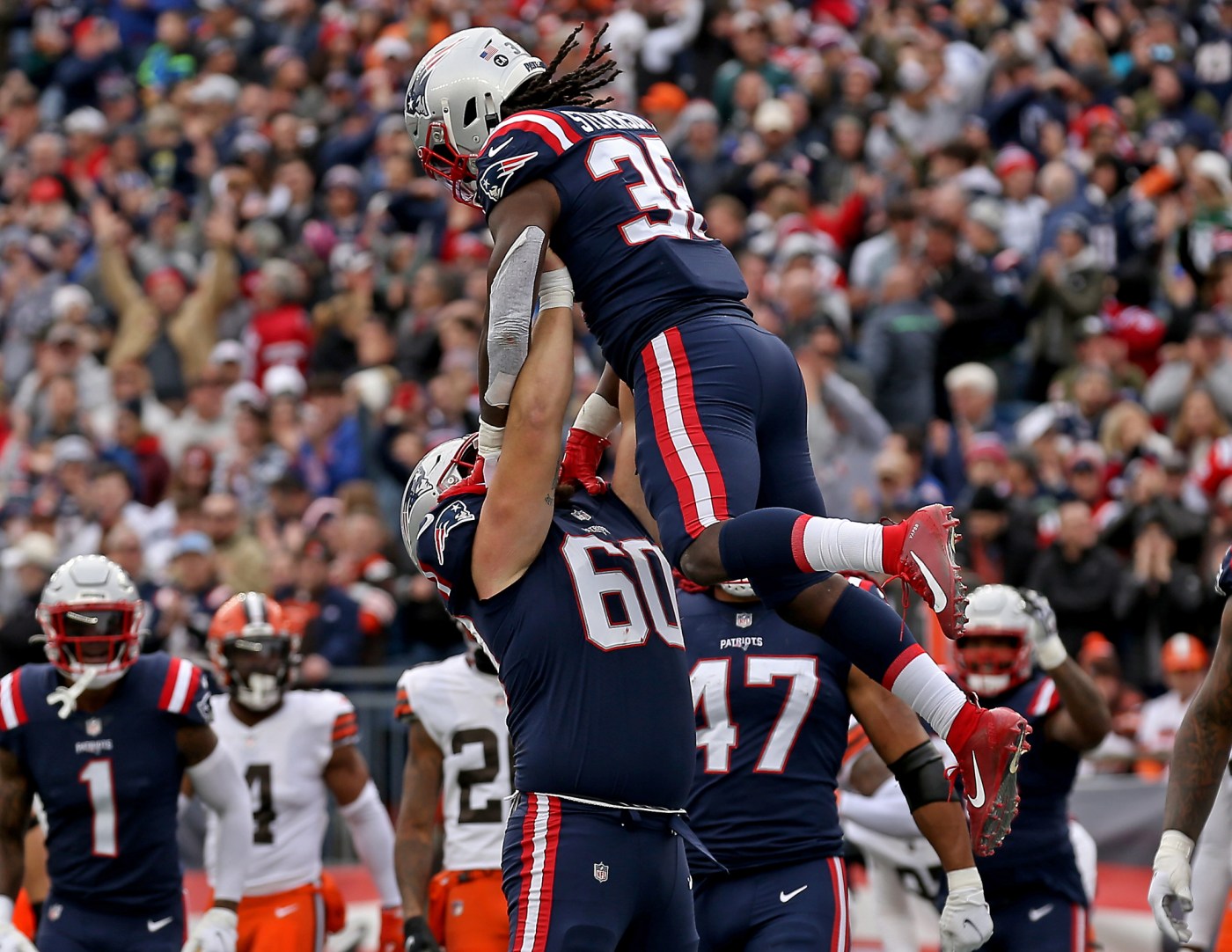 FOXBORO — This was the team that was promised.

An offensive bully. A defensive shapeshifter. And a rookie quarterback whose sharpest performances could elevate the Patriots to legitimate contention this season, while his down days would still allow them to eke out wins.

Except there was no eking on Sunday. Only rookie-led domination.

Through career days from Mac Jones and running back Rhamondre Stevenson, the Pats bulldozed the Browns 45-7 and extended their remarkable midseason turnaround at Gillette Stadium. Jones fired a season-high three touchdown passes, going 19-of-23 for 198 yards, while Stevenson scored two touchdowns and rumbled to his first 100-yard game as a pro. The Patriots scored 45 unanswered points and controlled play by thrashing Cleveland’s third-ranked run defense for 184 yards, a season best.

“That’s how you want to play the game of football,” Jones said. “I think it starts with the offensive line, they deserve all the credit in the world. We did hear a lot about obviously Cleveland’s front, and they have a good front and we have a really good offensive line. I’m proud of them.”

Defensively, the Pats collected four sacks and allowed 217 yards, a season low. Browns quarterback Baker Mayfield was mercifully knocked out with a knee injury in the third quarter, and finished 11-of-21 for 73 yards, one touchdown and a pick. After scoring a game-opening touchdown drive, Cleveland produced four punts and three turnovers and one white flag to ring in halftime.

The Pats (6-4) have now knocked off two AFC playoff contenders over their four-game win streak and hoisted themselves back into the postseason race.

“That was really a great day here for us today,” Patriots coach Bill Belichick said. “On so many different levels.”

Play opened with the Browns punishing the Patriots, rushing for 53 yards as they cruised toward the goal line on the day’s first series. But stonewalled on first-and-goal from the Pats’ two-yard line, Cleveland called three straight passes, including a fourth-down touchdown toss to tight end Austin Hooper. The Patriots answered with a run-heavy march of their own, one also capped by a touchdown pass to a tight end.

Facing second-and-goal from Cleveland’s 3, Jones took the snap, then one step to his right and lofted a perfect ball to Hunter Henry in the corner for a 3-yard score. It was the easiest play of a 15-play march that converted three third downs and overcame a holding penalty. Henry later added another touchdown, his seventh in as many weeks.

Three plays into the following series, the Pats laid a perfect trap for Mayfield and baited him into an interception. Seeing man-to-man defense pre-snap, Mayfield dropped back and ripped a sideline throw for David Njoku running an out route. Instead, second-year safety Kyle Dugger darted from his short zone and snatched the pass, before racing back to the Browns’ 5-yard line.

Did his eyes light up when he saw the ball?

“Oh for sure,” Dugger said.

Wasting no time, Stevenson took a pitch left on the next snap and hit pay dirt for a 14-7 lead. Cleveland punted on its next possession, and not even a full field could keep the Patriots from finding the end zone again. Jones and Co. quickly covered 99 yards, the last 23 on a strike down the seam to Kendrick Bourne, who high-pointed Jones’ pass between two Browns defensive backs for a spectacular grab.

“There was two guys right there and he just said, ‘that’s my ball’ and made the play,” Jones remembered. “That’s how we want our receivers to play.”

Thanks to two fumbles, the Browns’ final first-half series yielded minus-13 yards and sandwiched a field goal from the Patriots. Nick Folk banged a 38-yarder for a 24-7 lead at the break.

The Pats offense finally showed signs of imperfection to start the second half, sputtering quickly over a three-and-out. But Cleveland couldn’t manage much better, moving the chains once before punting again. Big mistake.

Stevenson scored his second touchdown on the next drive, the Patriots forced back-to-back turnovers on downs and followed with two more scores: Henry’s second receiving touchdown and the first of Jakobi Meyers’ career; a play that drew the entire sideline down to celebrate with him on a day none will soon forget.

Here were the best and worst Patriot performances from Sunday:

QB Mac Jones Remember when he hit a rookie wall? Or the league supposedly figured him out? Ha.

RB Rhamondre Stevenson The fourth-round rookie rumbled for a career high in rushing yards and scored two touchdowns despite missing every practice this week with a concussion.

Pass rush The Pats knocked Mayfield out of the game in the third quarter and finished with four sacks.

WR Kendrick Bourne In a game chock full of highlights, Bourne’s touchdown catch between two defenders might top them all. He racked up 141 yards between rushing and receiving.

Riding across Wyoming (Windiest ride ever)!

Here’s how you can save money at the pump

Andrew Yang talks ‘breaking up’ with the Democrats,…

New funds for Massachusetts communities most impacted by…