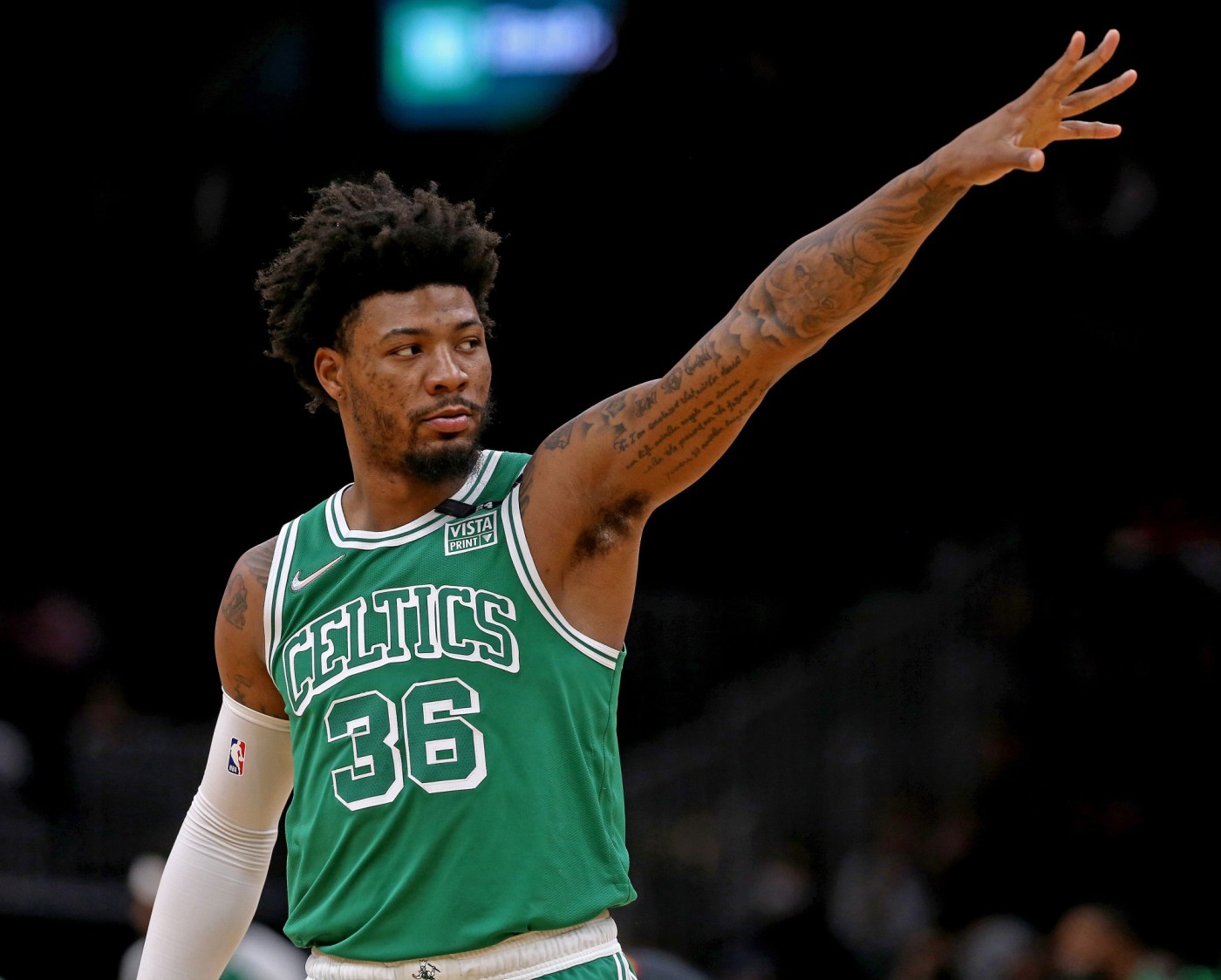 Marcus Smart can often go down hard after suffering an injury, like he’s been shot sometimes, before returning after a minimal absence.

Such was the case in Thursday night’s game in Brooklyn. After missing one game — he needed to be helped from the floor after going down with a sprained right ankle in Philadelphia on Feb. 15 — Smart returned against the Nets.

He admittedly benefited from the injury’s timing, using the just-completed All-Star break to recover.

“Pretty much all injuries I’ve had to keep my eye on,” he said, going down the list.

“I’ve had some unorthodox injuries between the oblique, the calf, the ankles, dislocated fingers, glass in my hand,” he said. “So my injuries are constantly preparing and doing everything I can to not make sure they cause me too much that will affect me in the long run by doing other things; trying to eat right, taking care of your body, stretching, getting the recovery down, getting my massages with the guys here in the weight room. Just getting my body stronger and being able to withstand those punches or hits that I take.”

This time, as well, featured a quick return, though Smart was still walking with a slight limp on Thursday.

“Obviously the night of the injury was pretty harsh for me. Couldn’t put any pressure on it. But on the break I was able to get some sun, got in the pool, did some pool things to help with the work on it,” he said. “The swelling’s going down. Right now just dealing with a bone bruise on it. But it feels good. We did everything that we were supposed to do to check it, test it out, make sure I was ready to go before going out there. And I feel pretty confident and the staff feels pretty confident that (I’m in a good place).

“The bone bruise, that’s going to be there, something that kind of just has to heal on its own. It’s going to linger,” he said. “It’s not really going to prevent me from playing, it’s just really the pain tolerance of if you can take it or not. So the pain is not too bad. The bone bruise does make it a little tougher for you, especially when you put your shoes on or have something that’s compressing against that bone. Just things like that. But other than that I’ll be all right.

“For me, it’s just who I am. It’s what I’ve always been able to do. It’s something that I’ve been blessed with these injuries that I’ve had to be able to come back in a time that probably wasn’t expected. But just to be out there with those guys. We have a really good groove going. And just want to really keep it going. Just like anything, you take a couple days off, extended time, it takes more time to get the rust off and get back in that groove. So I just want to keep it going.”

Having coached in Philadelphia and Brooklyn in successive seasons, Ime Udoka has a great idea of how Ben Simmons will fit with the Nets, once he’s available.

“It’s going to be huge, I coached him obviously two years ago. And so I know him well,” said Udoka. “It complements what they have and don’t have, a guy that is a one-man fast break and then you add the scorers and shooters all around him, obviously that’s going to be formidable, but another guy that can switch and do what they want to do defensively, obviously one of the elite defenders as well. So huge complement to that group, when they are healthy regardless of Ben or not, you have a few of the best players in the world off top. So they are going to be formidable, but adding him to the mix is going to be a good thing, it’s just we’ll see if they have the time to get it to gel more so than anything.”

Udoka, who spent a good chunk of his playing time in what was then known as the D-League, before Gatorade took over sponsorship, has a soft spot for Luke Kornet, who is back with the Celtics as a regular roster player.

“He’s been in a situation a lot of guys are this year, which is jumping around due to COVID situations, the amount of call-ups broke records,” said the Celtics coach. “A lot of guys had to stay ready because of that, and it shows his professionalism, being able to maintain focus. Regardless of where (Kornet) was at he was playing extremely well in the D-League, and that’s a credit to him.

“I can take that into account in my career, playing in the G-League quite a bit and the focus you have to have. The determination, drive and discipline to improve your situation and get noticed. Luke’s done a great job as far as that. Guys have had opportunities this year more than ever, and some guys are going to stick and have a long career because of that. Luke is a guy who’s done extremely well in his time in the G-League. He’s a guy we’re confident in. He’s a guy I’ve had experience with in New York and Chicago in previous years, and I feel comfortable throwing him out there.”

Crews called to car fire on Cooley Street in Springfield

Surprise Snowstorm Coming With THUNDERSNOW, Next Storm Has…

Wilbraham man faces drug, gun charges after getting behind…

Dozens of tornado warnings during severe weather outbreak in…

COVID-19 clinic for kids being held in Florence Sunday

AMERICA vs EUROPE Explained By Maps