Massachusetts law about bicycles and vehicles on the road 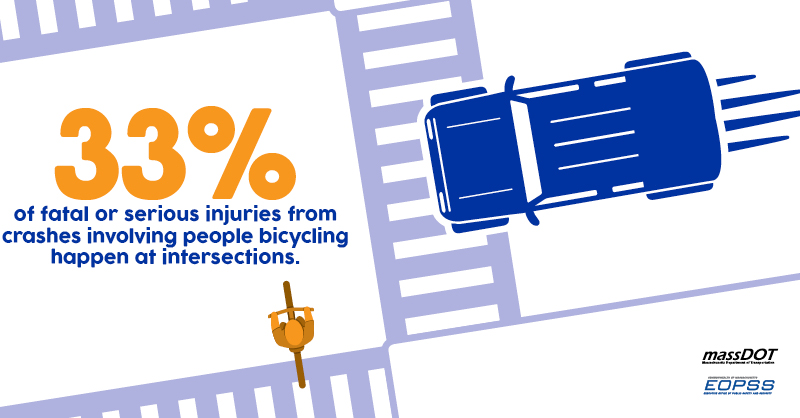 SPRINGFIELD, Mass. (WWLP) – MassDOT is reminding motorists to “scan the streets” to help prevent collisions between bicycles and cars.

According to MassDOT, there has been 146 reported bicyclist crashes in Massachusetts in 2022 as of Thursday. Thirty-three percent of accidents involving bicycles happen at intersections. The National Highway and Traffic Safety Administration says a majority of bike-related accidents could be prevented if both bicyclists and drivers were following the rules of the road.


Massachusetts named most bicycle-friendly state in the country

Under Massachusetts law, bicyclists are allowed to ride on the road just like drivers are, but they’re also required to follow the same rules. If they don’t, they too could get a ticket. State law requires bicyclists to use hand signals, give pedestrians the right of way, and only pass cars on the right.

Many communities in western Massachusetts have been adding bike lanes to their roads to ensure a safer ride for both bicyclists and drivers. It is legal for riders to be on the opposite of the road, it’s just very dangerous.

The following tips are provided in the Massachusetts Driver’s Manual when driving in the presence of a bicyclist:

It’s important to remember that under Massachusetts law, anyone under 16 must wear a helmet when riding a bike, but everyone should wear one at all times to be safe.

Marcus Smart says there is a ‘strong likelihood’ he plays in Game 3 – Boston News, Weather, Sports

Local residents rally in solidarity with Ukrainians in…