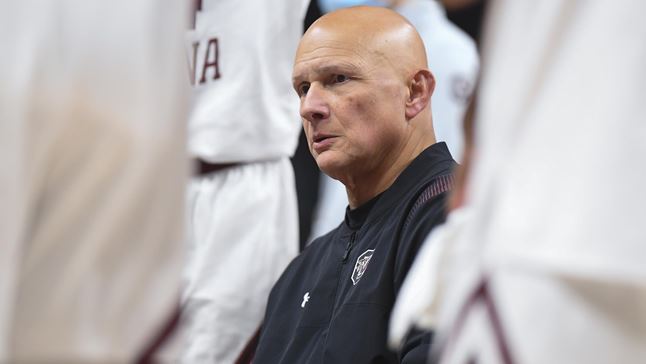 AMHERST, Mass (WWLP) – A former head coach of the South Carolina Gamecocks team for 15 years and 10 seasons finds his way onto a new basketball court in the Commonwealth.

In 2017, Frank Martin has led his former Gamecocks team to victory during their first win in NCAA since 1973. Following this, the team went onto first-ever Sweet 16, Elite Eight, and final four appearances.

Martin received his first head coaching opportunity at Kansas State Wildcats in 2007 up until 2008. The Wildcats were brought to the NCAA Tournament for four to five seasons. In 2009-10, Martin brought the Wildcats to a 29-8 record. Following this Martin was awarded Big 12 Coach of the Year.

Martin, his wife, and field alumna Anya (nee forest) had been present in the community by hosting events and investing in UMass women’s track and field program.

Martin had been inducted into the Naismith Coaches Circle that was created by the Naismith Memorial Basketball Hall of Fame. Martin was given this honor for his community and coaching efforts.

Bamford said in a statement, “we are thrilled to welcome Frank, Anya ’98, and the Martin family back to the Commonwealth to lead our proud basketball program.”

A statement made by Martin said, “Anya and I have never been more excited to call a place home like we are with UMass.”

“It is evident that there is tremendous alignment in place to win and do it the right way. We cannot wait to be in Amherst and represent that community and our incredible University. Let’s all get on this ride together, let’s dream big, and let’s be relentless at making our dreams a reality. Let’s win! Go UMass!”

AMERICA vs EUROPE Explained By Maps

Trees toppled, power lines down as storms roll through…

Cleveland Clinic ranked No. 2 hospital in the world

‘He heard you’: Jerry Remy’s family thanks Red Sox fans for…

Would love to see soccer stop the flop… and other…

Traffic detoured after motorcycle crash on Bay St. in…