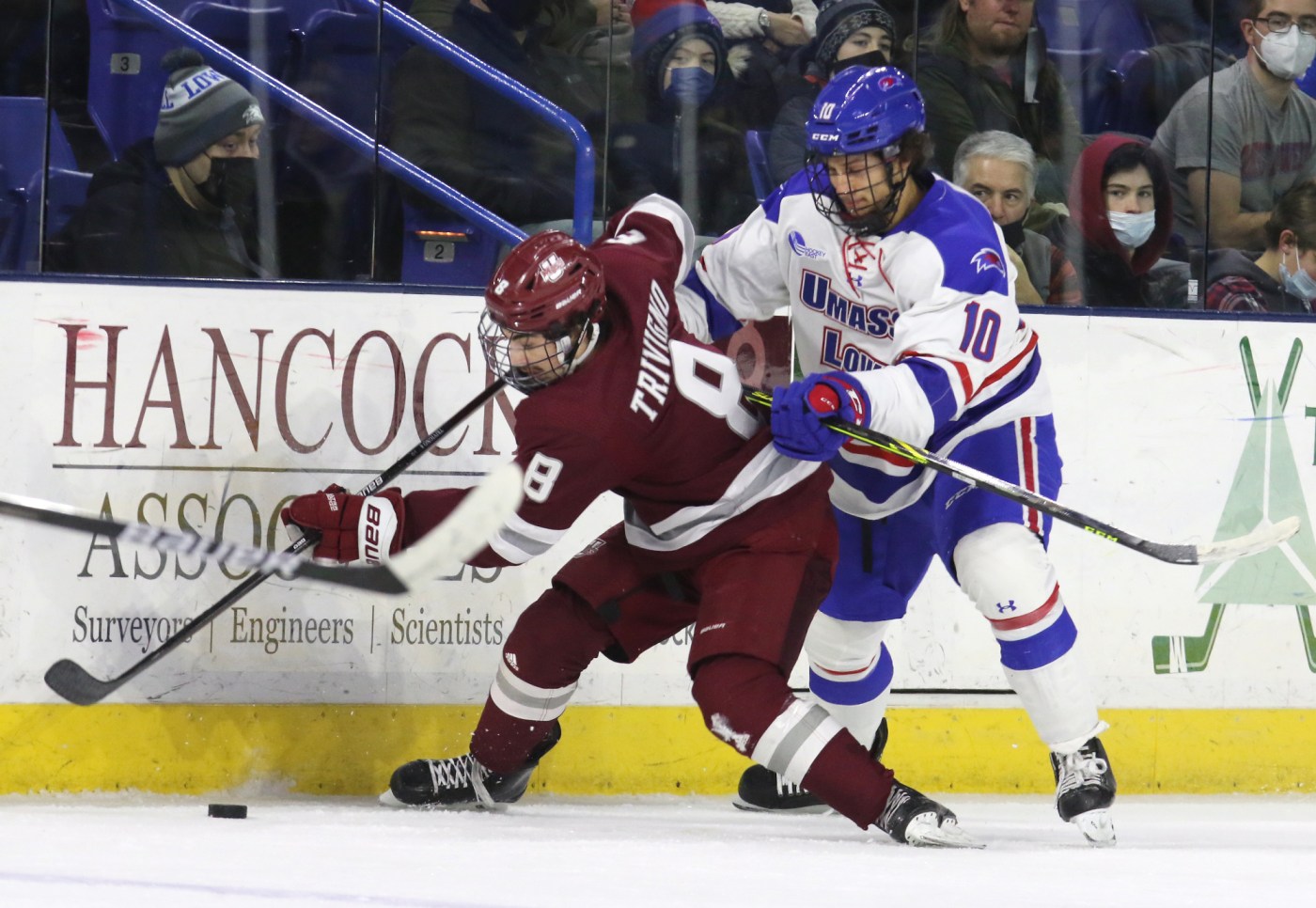 And the winner will play for the Hockey East championship.

The puck will drop at 7:30 p.m. at the TD Garden in Boston unless the semifinal between Northeastern and Connecticut goes into overtime.

“We played them in the championship game last year. We played three hard-fought games this year. We’re two teams that know each other well. It’s become a big rivalry, which is great for our state and our university system,” UMass head coach Greg Carvel said.

If UMass Lowell wins Friday, it’s almost certain the River Hawks will make the 16-team national tournament. A loss makes things a bit murkier, depending upon what happens in the other conference championships.

Of course, UML can take away any suspense by winning Friday and then Saturday, as conference champs automatically make the field.

Carvel said the fourth meeting will “be a big boy hockey game.”

“You better show up ready to play. It’s going to be on a different stage than both teams are accustomed to. We’re going to have to be at the top of our game to beat a very good Lowell team,” Carvel added.

Likewise, UML head coach Norm Bazin has a lot of respect for the Minutemen.

Coaches talk all the time about creating a five-man attack and no Hockey East team does that better than the Minutemen.

Morrow has scored a goal in all three meetings, including a late game-winner in the final clash, and he has five points in all against the River Hawks.

The top forwards for the Minutemen are Bobby Trivigno and Josh Lopina. Trivigno was named Hockey East’s Player of the Year earlier this week. Trivigno (18-27-45) and Lopina (12-14-26) are threats every time they hop over the boards.

For UMass Lowell, the recipe for success has been the same formula Bazin’s used in his 11 seasons behind the bench.

Senior Owen Savory has been outstanding between the pipes, going 20-5-2 with a 1.85 goals against average and a .929 save percentage. He’s a finalist for the Mike Richter Award.

As a team, UML is allowing the fifth fewest goals per game in the nation.

“I don’t know how it’s going to play out. But historically, though, both teams are fairly strong at not giving up chances,” Bazin said. “It’s exciting to play. It’s a chance to play in a playoff tournament game.”

The River Hawks know how tough it is to get to Boston.

“It’s tough, especially with the way the league was this year. I think it’s the most parity I’ve seen in Hockey East in my 11 years,” Bazin said. “Obviously I was happy with the way we approached the (Merrimack) game. I thought we started on time.”

“It’s a playoff game. We’re focused on UMass on Friday. We’re trying to block out all the noise,” Lee said. “UMass is a very good team, but we have a very special group here.”

“They’re very structured, very well coached. And they compete hard,” Carvel said. “If you don’t match their structure and compete, you’re not going to win. I have a lot of respect for Norm and what he does there.”

No UML player has played at the TD Garden. UML hit the Garden ice on Thursday at 3:45 p.m. for practice. The arena was nearly empty then. The atmosphere will be far different Friday night.

“I think it’s going to be awesome. I hope the place is full and everyone is from the state of Massachusetts cheering for one state school or the other,” Carvel said.