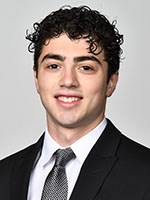 Trivigno is the 12th player under head coach Greg Carvel to sign with an NHL team.

Rollins is 1st Black woman to be Massachusetts’ US…

Tatum and the Celtics take on the Pistons – Boston News,…

Boston’s JD Martinez sprains ankle by stumbling over base

A dry start to the weekend, but winds increase with likely…

Two displaced after fire on Alden St. in Springfield | News

Patriots pull away from Titans 36-13, knock off AFC’s top…