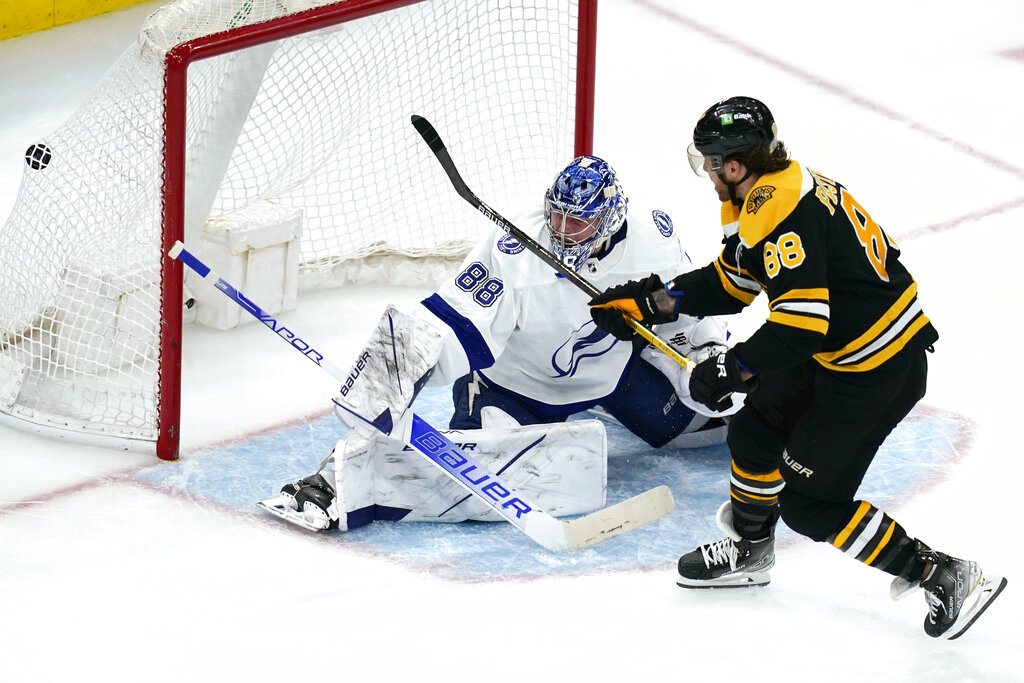 BOSTON — David Pastrnak had his 12th career hat trick, scoring the tiebreaking goal with 4:10 left Thursday night to help the Boston Bruins beat the Tampa Bay Lightning 3-2 and move them ahead of the two-time defending Stanley Cup champions in the Eastern Conference playoff race.

Entering the game one point behind the Lightning, Boston finished the night with 85 points — tied with Toronto for second in the Atlantic Division. Tampa Bay has 84 points, good for fourth.

Jeremy Swayman stopped 22 shots for the Bruins, who have won 12 of their last 14 games and are 25-9 since New Year’s Day.

Brandon Hagel and Steven Stamkos scored for Tampa Bay, and Andrei Vasilevskiy made 36 saves for the Lightning.

Erik Haula assisted on all three of the Bruins’ goals — his first career three-assist game — as Pastrnak twice tied it after the Lightning took the lead. Trade deadline pickup Hampus Lindholm also had an assist in his Boston debut.

The Bruins had a four-minute man advantage on Erik Cernak’s high-sticking penalty just 80 seconds into the game, but they didn’t get a single shot on goal.

And that wasn’t even their worst power play.

With about six minutes gone in the second, Tampa’s Mikhail Sergachev went off for high-sticking. But only the Lightning could capitalize, taking a 1-0 lead when Ondrej Palat fed the puck into the center to Brandon Hagel for the easy redirection into the net.

Hagel was one of Tampa Bay’s trade deadline pickups, along with Nick Paul, helping add size on offense. Lindholm made the stat sheet when he fed the puck to Haula, who made a long pass off the boards to set Pastrnak free for a breakaway midway through the game.

The Lightning retook the lead four minutes into the third when a rebound bounced around the middle before it popped out to Stamkos and he beat Swayman to make it 2-1.

But Pastrnak tied it again when Haula fought for it behind the net and poked it to the side. Pastrnak spun around, hit it with the back of his stick and squeezed it between Vasilevskiy’s pad and the post to make it 2-all.

The Bruins hoped to get Patrice Bergeron back from an infection in his elbow that required surgery, but he missed his fourth straight game. Bergeron returned to practice Wednesday and coach Bruce Cassidy declared him probable for the Tampa Bay game, pending a doctor’s appointment Thursday morning.

Instead, the Bruins are eyeing Saturday’s game against the New York Islanders for their captain’s return.

Plans for the Future and Travel Update

Mother seeking justice one year after daughter was shot and…

Here's where to see best fall foliage in Massachusetts…

Useful tips to save your money at the gas pump