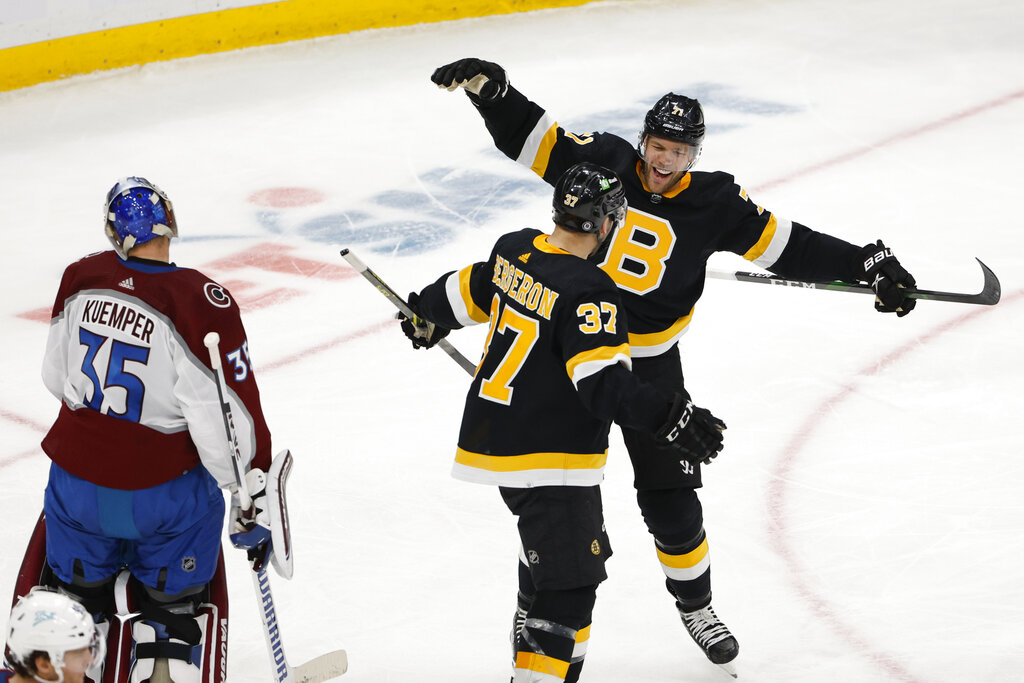 BOSTON — David Pastrnak had two goals and an assist and the Boston Bruins rolled past the Western Conference-leading Colorado Avalanche 5-1 on Monday.

It was a makeup for their Dec. 23 matchup that was postponed because of a league-wide outbreak of COVID-19 cases.

Pastrnak, who broke out of a four-game scoring slump with a game-winning overtime goal to lift Boston past Ottawa on Saturday, now has a team-leading 27 goals on the season.

Nathan MacKinnon had the lone goal for Colorado, which had its two-game win streak snapped. Darcy Kuemper finished with 40 saves.

Boston held a 21-9 edge in shots on goal during the opening period, but needed a little luck to take an early 1-0 lead.

Charlie McAvoy took away the puck from Avs star defenseman Cale Makar along the boards in the Colorado zone and flipped it toward the slot. The pass went between Bergeron and Samuel Girard and ricocheted to a cutting Pastrnak, who ripped his snap shot past Kuemper with 2:30 remaining in the period.

The Bruins pushed it to 2-0 with 11:59 left in the second after Bergeron gathered a pass from Hall, had his initial shot saved by Kuemper, then stretched his stick to flip in his own rebound. It was Bergeron’s 13th goal of the season.

Colorado finally got on the board via the power play. The Avalanche took advantage and MacKinnon got his slap shot into the roof of the net past Swayman off assists from Mikko Rantannen and Makar.

But the Bruins responded quickly, scoring two goals over the next 2:44.

First, Pastrnak fired in a slap shot from the top of the slot through traffic to make it 3-1.

Just over a minute later, DeBrusk was the trailer following a Bruins takeaway and was the recipient of a pass from Curtis Lazar in front of the net. DeBrusk’s first wrist shot was stopped, but he wrapped the rebound past Kuemper for his second goal in two games.

Pastrnak has scored 19 of his goals in the past 22 games. … Monday was the Bruins’ final game before Brad Marchand is eligible to return from his six-game suspension for punching and high-sticking Pittsburgh’s Tristan Jarry.

Boston visits Seattle on Thursday in the first of six straight on the road.

Baldwin to ABC about shooting: ‘I didn’t pull…

Arrest made in Holyoke homicide

Bills return starters at practice in preparing to host Pats…

Boston Walk on a Rainy Day | lLife in Boston

Man kicked off flight for wearing underwear as face mask |…

Lawmakers divided over when to impose sanctions on Russia