Polar vortex and its influence the rest of this winter 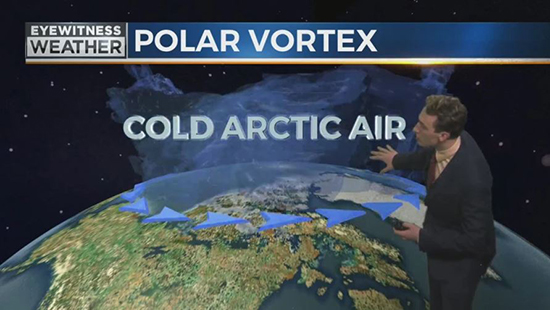 CENTRAL NEW YORK (WUTR/WFXV/WPNY) – During the winter months, you might have heard meteorologists refer to something called the Arctic polar vortex. It’s a band of strong westerly winds that form high up in the atmosphere (about 10 and 30 miles above the North Pole every winter). The winds enclose a large pool of extremely cold air. The stronger the winds, the colder the air inside it gets as it becomes more isolated from warmer air outside of it.

The polar vortex doesn’t always affect our winter weather here in the northeast. When it does, however, the effects can be extreme. It might sound weird to say that when the polar vortex is weak, it can cause chaos and mayhem, but it’s true!

As NOAA climate researcher Rebecca Lindsey explains, when the polar vortex is strong, it remains stable and stays far up north in the Arctic. Every other year or so, the polar vortex weakens. When this happens, the vortex slows down, can become more wobbly, or even split into several smaller sections of cold air that can push southward into the U.S.

For this winter, however, the polar vortex is strong and is expected to remain that way into Spring which means it’s not likely to impact our weather here in CNY. This DOES NOT mean we can’t or won’t see any cold outbreaks in the coming weeks since there are other factors like the jet stream which can bring cold arctic air down to the U.S. This just means that the polar vortex is not likely to be a factor.

Report: US Supreme Court may have votes to overturn Roe v. Wade

US to ease travel restrictions on fully vaccinated foreign…