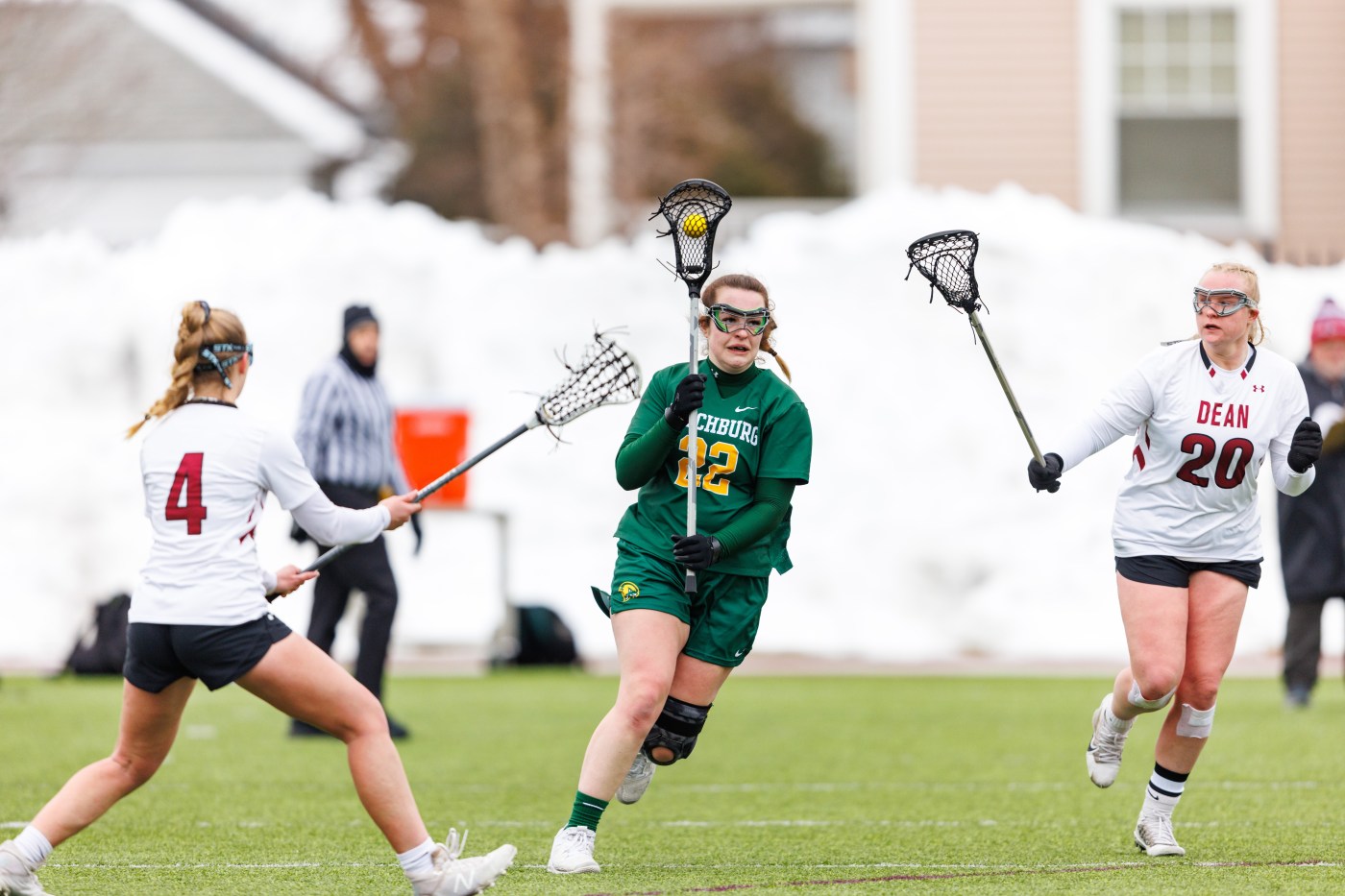 A pair of local lacrosse stars are revving up the offense at Fitchburg State. Billerica’s Brooke Johnson and Tewksbury’s Alexis Raymond are forging a potent attack with the Falcon’s women’s lacrosse team.

A returning veteran, Johnson is currently posting career best numbers with the Green and Gold. The Shawsheen Valley Tech graduate has 13 goals and 14 points in her team’s first seven games, doubling her point totals of her last two seasons combined. The 5-foot-8 junior attack/midfielder has scored seven goals over her last three games, including a pair in the team’s most recent 16-12 victory over UMass-Dartmouth, March 22.

A 2021 MASCAC Winter/Spring All-Academic, the exercise and sports science major opened the season strong during a three-game road trip scoring seven points, culminating with her first collegiate hat trick and four-point game in a big 14-9 win at Rivier, March 3. A three-sport athlete at Shawsheen Valley Tech, Johnson lettered in lacrosse, volleyball and basketball, before graduating in 2019.

Tewksbury teammate Alexis Raymond is also setting the league on fire in her first year on the squad. A 5-foot-3, freshman attack, Raymond currently has eight goals, five assists and 13 points in the Green and Gold’s first seven games, including a pair of goals and 10 ground balls in the team’s last two contests.

Putting up points at the collegiate level is nothing new for the freshman. Raymond enjoyed a tremendous rookie campaign with Fitchburg’s field hockey team this fall, netting a team high 16 points, off seven goals and two helpers. She was also selected for Fitchburg State’s 12th Player Award by Little East Conference (LEC). The Fitchburg State field hockey team concluded its 2021 campaign with an overall record of 2-16 and a 1-11 mark in conference play.

Raymond was also a two-sport at Tewksbury Memorial High School, before graduating in 2021. She was a member of the All-Conference team, while also earing team MVP honors in field hockey, in addition to earning the Coaches Award in ice hockey.

Anchoring the defense for the Falcon’s this season has been Tewksbury native Samira El-Hakim.

A 5-foot-8 junior, El-Hakim has generated five ground balls in five games, all starts, this season. The Tewksbury High grad (’19) is majoring in elementary education at the University.

Emily Bartlett shined both on the mound and at the plate, as the Worcester State University softball team split its home opening doubleheader, Tuesday afternoon against Lasell University.

In the home opener, Bartlett struck out eight and worked out of several late inning jams. The 5-foot-5 sophomore right-hander surrendered just one earned run off four hits in a complete game victory. She also helped out her own cause drilling an RBI triple in the first inning of a 3-2 victory, March 22 at Rockwood Field.

A 2020 graduate of Lowell Catholic High School, Bartlett played four years of varsity softball and basketball for the Crusaders. She earned numerous high school awards including the 2018 softball Offensive Player of the Year and 2019 Most Valuable Player. The three-time League All-Star and two-time team MVP in basketball was also named Lowell Catholic’s Female Athlete of the Year her senior season.

In eight games this season, the occupational studies major is off to a 2-3 start, sporting a 4.16 earned run average, with 35 strikeouts in 32 innings. She’s also carrying a big bat going 12-for-32, hitting .375, with three extra base hits and five RBI in 12 games.

Holding a 4-1 lead in the bottom of the tenth, Morrill entered the game promptly retiring the first two hitter he faced. The former Chelmsford High Lion got into some trouble, however, surrendering a pair of back-to-back singles putting runners at the corners. With the potential tying run coming to the to the plate, Morrill managed to work his magic fanning Caleb Snpur with the game-ending punch-out to secure the save.

A 6-foot-3, 170-pound southpaw, Morrill is majoring in business administration at WSU.

In earlier action, Tyngsboro’s Chris Ausiello put the squeeze on North Park, as WSU pulled off a 5-4 extra inning victory, March 17 at Lake Myrtle Stadium.
Worcester State executed several successful squeeze plays on Thursday to help them take a lead, with Ausiello providing the game-breaking walk-off bunt that brought home Tyler Smith from third base in the bottom of the 11th to help the Lancers (3-5) collect their first win on their Spring Break trip to Florida.

A 5-foot-10, 170-pound junior infielder, Ausiello is batting .293 in his first 10 games with five RBI and seven runs.  He appeared in all 23 games at shortstop for the Lancers last season hitting .284 with 13 runs scored and four stolen bases on the season. He is majoring in business administration at Worcester State.

A graduate transfer who spent four years at Bucknell, Ceppi was previously voted to the All-Northeast-10 first team and the CoSIDA Division II Academic All-District team. Last year at Bucknell, she was a member of the Patriot League’s All-Defensive Team.

Ceppi was playing her best basketball towards the end of the season, averaging 16 points and 10.1 rebounds over the last seven games. Bentley finished the season with a 19-9 record.

Springfield DPW to pick up yard waste on Saturday

Massachusetts is the least likely state for holiday package…

A Monster Storm Is Advancing