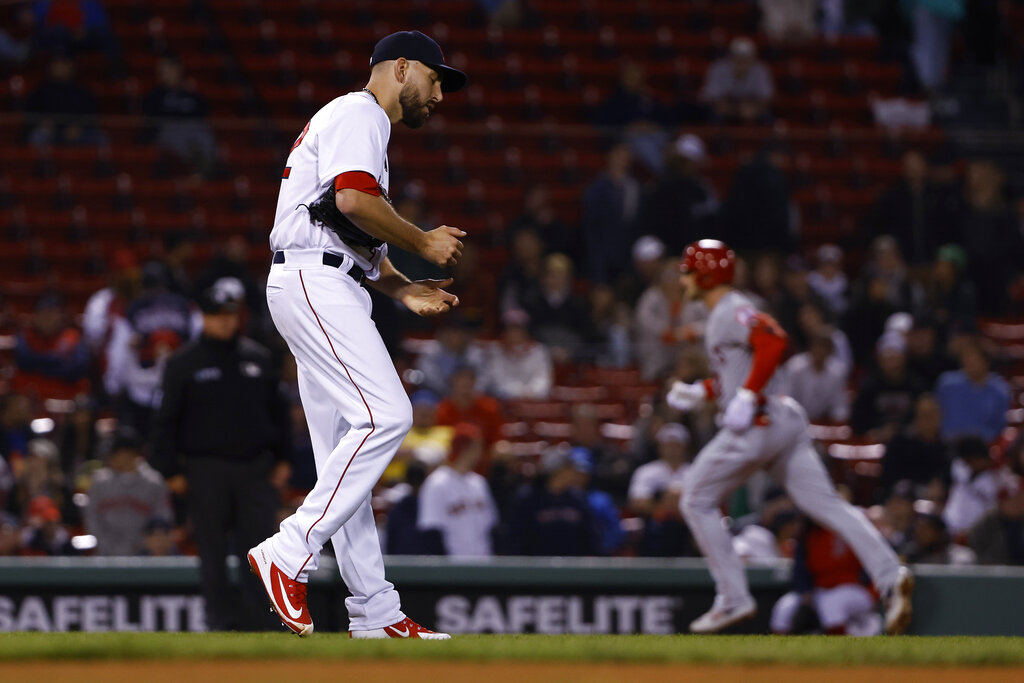 BOSTON — The Los Angeles Angels scored six runs in the 10th inning, including a two-run homer by Taylor Ward and a three-run shot from Jared Walsh, for a 10-5 win over the Boston Red Sox on Wednesday night.

All of the runs in the 10th came with two outs for the Angels, who had Max Stassi on second to start the inning. Ward drove in Stassi with a homer off Matt Barnes. Then Mike Trout singled and Shohei Ohtani walked, prompting Boston to put in right-hander Hirokazu Sawamura for Barnes.

Boston scored one in the bottom of the 10th — an RBI single from Jackie Bradley Jr. that brought Bobby Dalbec home.

Barnes (0-2) took the loss, his ERA rising from 5.87 to 8.64. Boston right-hander Garrett Whitlock started the game, giving up two runs on two hits with no walks and striking out nine over five innings.

Reid Detmers started for Los Angeles and went 4 2/3 innings, giving up three runs on four hits and two walks with four strikeouts and a hit batter.

Boston briefly held a 4-3 lead in the eighth thanks to Xander Bogaerts’ solo home run with one out Angels left-hander Aaron Loup.

The Angels tied it in the ninth. With one out, Trout and Ohtani were both walked and Jared Walsh hit a line drive single to score Trout.

Angels: RHP Austin Warren, who suffered a nasal fracture when he was hit in the face during Red Sox batting practice on Tuesday, was placed on the injured list and is expected to undergo surgery when the team returns to Los Angeles.

RHP Shohei Ohtani (2-2, 4.19 ERA) is expected to make his first career start at Fenway Park on Thursday. He is 1-1 (5.00) in two career starts against the Red Sox. Ohtani will face LHP Rich Hill (0-1, 3.71), who despite no decisions in his last two starts, allowed no runs over a combined eight innings.

Getting Answers: COVID-19 hospitalizations on the rise |…

Pfizer says COVID vaccine is more than 90% effective in 5-…

Residents show their support for local truckers on…