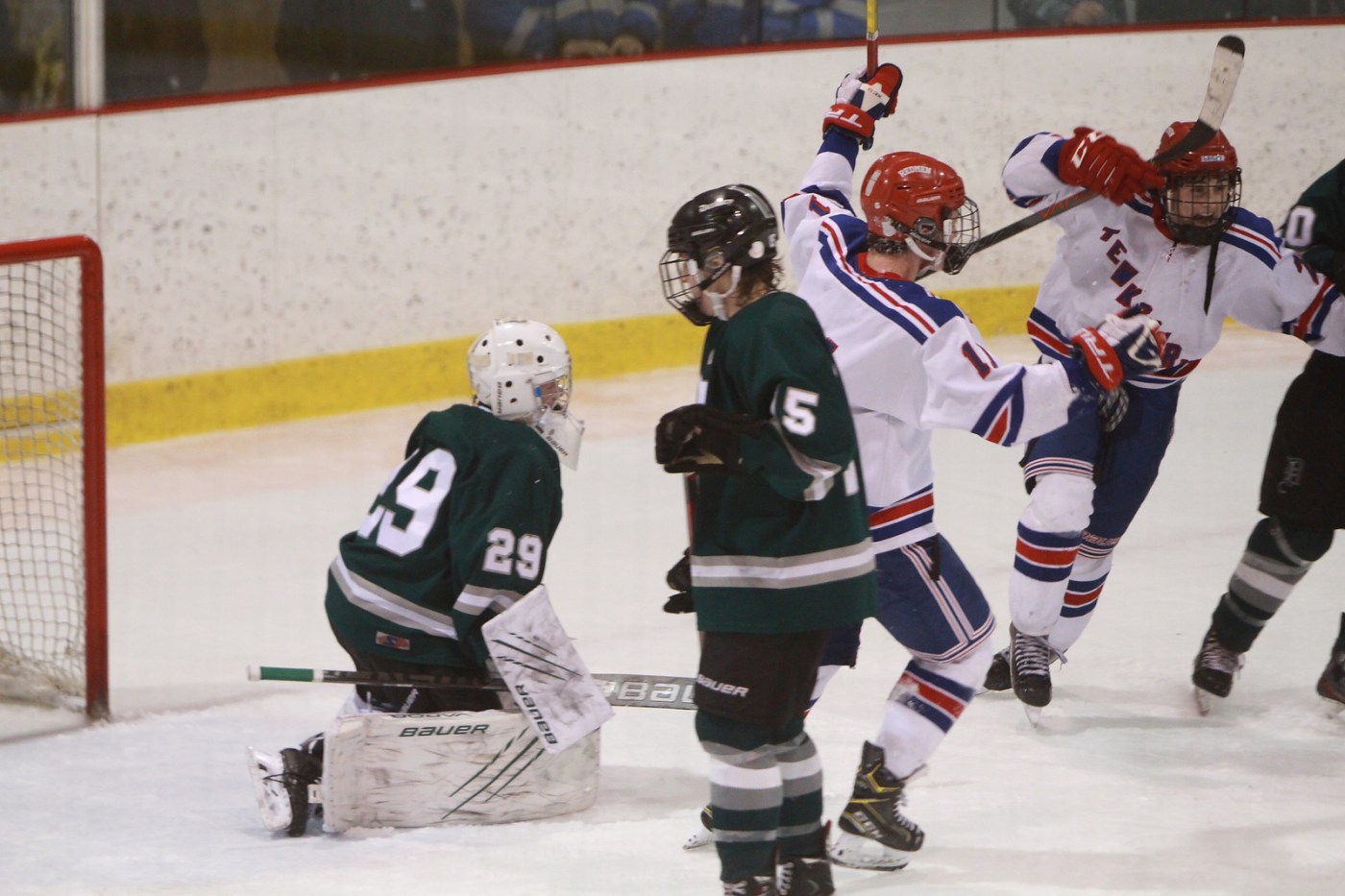 FRAMINGHAM — Tewksbury High junior Nick DiCioccio scored on a wrist shot from the right point with 43 seconds left in double overtime to lift the top-seeded Redmen to a 4-3 win over No. 5  Duxbury in a Div. 2 semifinal Monday night at the Loring Arena.

With the win, the Redmen will play for the state championship on Sunday against the winner of Tuesday’s semifinal between Gloucester and Canton, the latter of which defeated Tewksbury in the TD Garden in 2019.

“(Getting to the final) has obviously been the number one thing that we have been looking to do all year,” said DiCioccio. “I am just so excited right now, it’s just crazy. This has been our goal all year and we did it.”

With 4:20 left in the eight-minute, 3-on-3 double overtime period, Duxbury was called for a major penalty, putting the Redmen on a 4-on-3 power play. After several bids were turned away, sophomore Matt Cooke had the puck in the right circle and fed the puck back to DiCioccio. He took several strides in and uncorked a shot that found the back of the net, allowing the Redmen to go crazy in celebration.

“I was exhausted, but I just remember the shot,” said DiCioccio. “(Cooke) passed it to me on the point and I saw someone screening the goalie, so I just ripped a hard shot and it went in. I’ll remember this shot for the rest of my life.”

Tewksbury held a 2-1 lead after the first period, holding a 12-8 shot advantage. Just like in Tewksbury’s quarterfinal game, Cooke struck early, putting home a pass from Caden Connors in 4-on-4 play just 2:29 into the game. It was Cooke’s 17th goal of the year and Connors’ 92nd career point.

Just over three minutes later, the Redmen struck again as DiCioccio had the puck at the right boards and sent a pass across to the high slot where Jeremy Insogna one-timed a slap shot into the net with one second left on a power play, making it 2-0.

Duxbury cut the lead in half scoring on its own power play with 7:18 left in the first. Aidan Harrington picked up a loose puck just outside the Redmen blue line and unleashed a wrist shot to the inside left corner for his 16th tally of the season just inside the zone.

The teams exchanged goals in the second period. The Redmen struck first as DiCioccio coasted from end to end and from the left side he unleashed a rocket wrist shot just inside the blue line, which landed just inside the near post. Cooke and Connors (93rd career point) earned the assists.

With 9:09 left in the period, Tewksbury was called for a five-minute major boarding call. Duxbury took advantage of that, scoring a goal 52 seconds later as defenseman Brendan Bonner found the back of the net on a wrist shot through traffic from the left point.

The score remained that way until the final minute of regulation when Duxbury’s Dan Bird put home a rebound on a 6-on-4 advantage after the Redmen were called for a penalty and the Dragons pulled the goalie.

Local pediatricians busy amid rise in cases of respiratory…

Is It A Cold, Or Flu, Or COVID? How To Tell The Difference