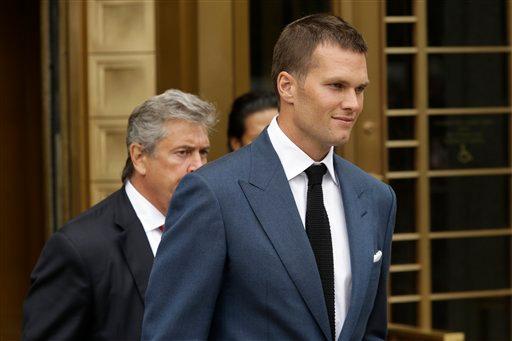 With all the NFL’s efforts to bring down the Patriots, what did they actually accomplish?

New reporting from Pro Football Talk’s Mike Florio’s new book, “Playmakers,” revealed that the NFL intentionally destroyed all logged evidence of PSI measurements of footballs used during the 2015 season, the season immediately after the Deflategate scandal rocked the football world and cost the Patriots a first- and fourth-round draft pick, as well as $1 million, while Tom Brady was suspended for four games.

The reported reason for the elimination of that evidence was for the NFL to avoid looking worse than it already did. According to Florio, the logged PSI totals would’ve revealed numbers that weren’t far off from those measured during the 2015 AFC Championship, when the Patriots slaughtered the Colts, 45-7.

If the numbers were similar, as the results showed, then dragging Brady’s reputation through the mud, leveling a four-game suspension and hammering the Patriots with penalties would’ve looked foolish.

Ahem, how does the NFL look right now?

Commissioner Roger Goodell owes Pats owner Robert Kraft $1 million and a couple draft picks if the reporting is accurate. While they’re at it, the NFL owners should fine Goodell an additional $10 million to recoup the costs of an investigation that evidently didn’t bother to take into account basic science.

That’s not to absolve Brady and the Pats of all guilt. We have the smoking gun in the form of text messages from the referees’ locker room attendant, Jim McNally, and the Pats’ equipment assistant, John Jastremski, that showed intentional deflation of footballs.

Denying that it happened would be foolish, too.

But if the equipment guys were altering the balls in a way that was no different or barely different than the balls would’ve been altered by the weather regardless, the penalty doesn’t fit the crime.

And we’re once again reminded that the NFL can’t be trusted.

Further adding to the frustration, the logged PSI totals from the 2015 season were intentionally erased at the hands of NFL general counsel Jeff Pash, according to Florio’s reporting.

Pash is the one who personally edited the Wells Report, according to the NFLPA, thus clearing any idea that it was an independent investigation.

The Patriots were furious with the original Deflategate ESPN report, one that was later proven to be incorrect, and asked the NFL to publicly correct that, but Pash told Patriots general counsel Robyn Glaser that it wouldn’t accomplish much.

This new information reported by Florio is in line with what Kraft said at the 2016 owners meetings, when he revealed he sent a letter to Goodell “responding to his comment that if any new facts came up he would take them into consideration,” Kraft said at the time. “I personally believe that when the league made their decision they did not factor in the ideal gas law. They admitted that publicly last year.”

Goodell reportedly responded by saying there was no new information.

If Florio’s reporting is accurate, then Goodell’s response was obviously not.

The league had promised to be more diligent in its reporting of PSI totals from the footballs in the 2015 season after what happened in the AFC title game that January. Nobody wrote down the PSI totals in that game, according to Dean Blandino, and it was clear that better reporting practices needed to be in place.

Well, those were in place in 2015, but that information was evidently scrapped from the record books.

Unfortunately for the Patriots and for Brady, the damage to their public perception has already been done.

Unless Goodell publicly acknowledges that the NFL wasn’t honest, made a mistake and the Patriots get their $1 million and draft picks back for this (don’t hold your breath), there will still be a majority of NFL fans who will always call Brady and the Pats cheaters.

It’s a word that Brady never denounced, famously saying, “I don’t believe so” when asked if he cheated in 2015.

It’s like when MLB commissioner Rob Manfred went to Fenway Park in David Ortiz’s final season and announced that the 2003 survey testing, the one that Ortiz reportedly tested positive for, was based on faulty science and the league had since discovered double-digit false positives in that batch of tests.

But the damage had already been done.

Ortiz is still considered a cheater by many, though he did earn 77% of the vote in the most recent Hall of Fame balloting and will be enshrined in Cooperstown, N.Y., this summer.

In five years, Brady will undoubtedly earn his spot in the NFL Hall of Fame, but “Deflategate” will always be part of his story.

City preparing for worst-case scenario ahead of storm

US to automatically wipe out over $5.8B in student loan debt

Smith still finding footing with Pats with former team next…