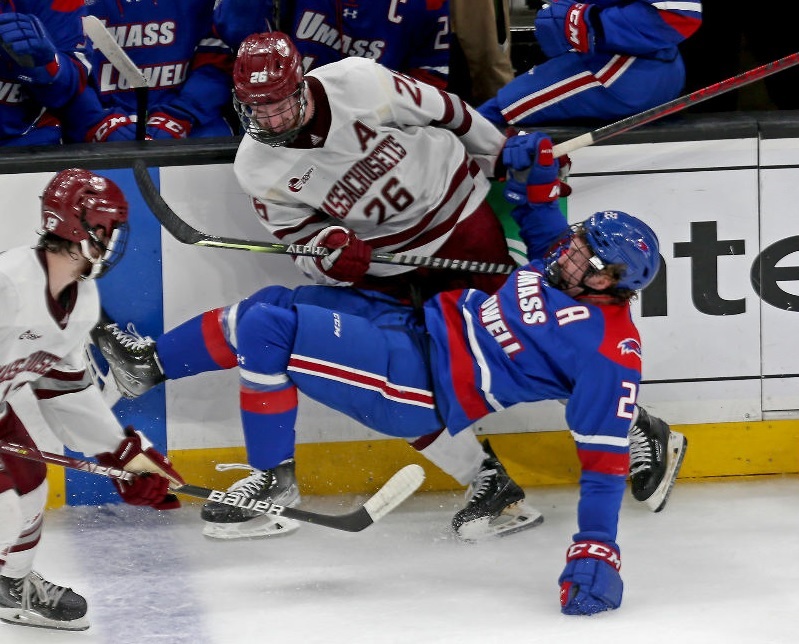 BOSTON — They only allowed 19 shots, just eight over the final two periods.
But UMass Lowell will not be playing in its ninth Hockey East championship game. Despite holding defending national champion UMass in check for long stretches, the River Hawks fell 3-1 in a Hockey East semifinal before a raucous crowd of 13,106 Friday night at the TD Garden.
The Minutemen (21-12-2) led 2-1 and the minutes were ticking down when UML freshman Matt Crasa inadvertently fumbled the puck at the bottom of the right faceoff circle. It trickled inside the left post behind UML goaltender Owen Savory with 7:00 left.
Jerry Harding, since he was the closest UMass player to the puck, was credited with the goal.
The River Hawks never recovered, though they did kill off a cross checking penalty to Andre Lee.
Exhibiting the hustle the team has shown all season, senior defenseman Jon McDonald made a sprawling save on an empty net shot with Savory (16 saves) pulled for a sixth skater, even though little time was left on the clock and his team trailed by two goals.
No. 13 UMass Lowell (21-10-3) will learn its NCAA Tournament fate late Saturday night after all the conference tournaments are over. The River Hawks will root for all the favorites to win.
The Minutemen will face UConn, a 4-1 winner over Northeastern, for the championship Saturday at 7 p.m.
Both teams drew large crowds and the atmosphere was electric.
Only three penalties were called, as the officiating crew let several obvious infractions go. UMass went 1-for-2 on the power play, UML 0-for-1. UML outshot its in-state rival 17-8 over the final two periods.
Crasa tallied the lone UMass Lowell goal late in the second period to pull the River Hawks within 2-1, the only shot to elude Matt Murray (22 saves) all night. Impressively, Crasa scored a goal in all four meetings against the Minutemen.
It was UMass Lowell’s first TD Garden appearance in exactly five years, a span of 1,826 days, when the River Hawks topped BC for the 2017 championship.
UMass Lowell had won seven straight Hockey East semifinal games. Head coach Norm Bazin fell to 8-3 in the playoffs.
Down 2-0 after one period, the River Hawks, who saw a four-game winning streak snapped, played a superb middle period. They outshot the defending national champs 13-2 and, more importantly, tallied a late goal to pull within 2-1 after 40 minutes.
Marek Korencik took a cross-ice pass from Blake Wells seven minutes in, but Murray swallowed up Korencik’s 15-foot bid.
Lee sent a 45-foot wrist shot through the legs of a defenseman and past Murray with 6:22 left, but the puck clanked off the crossbar. Murray never saw Lee’s shot and didn’t move.
UML finally got on the board at 16:37 when Crasa redirected a Nick Austin wrist shot from the right point past Murray. Reid Stefanson, battling with defenseman Scott Morrow, supplied the screen in front. The goal was allowed after a video review. The chants of “UML! UML!” were deafening after the goal stood. Captain Lucas Condotta also picked up an assist on the goal.
It was the 12th goal of the season for the crafty Crasa.
Seconds later, UML was awarded its first power play, but not much came of it as Amherst kept shots to the outside, ruining the River Hawks’ chance to draw even entering the final period.
UML started the game strongly, outshooting the Minutemen by a 5-2 margin with 11:17 left. But then the Minutemen flipped the switch, especially after Crasa was questionably called for hooking, the only penalty of the opening penalty.
Twenty-nine seconds into the power play, Amherst took a 1-0 lead. Savory stopped Josh Lopina in front, but the puck flew into the air, where Garrett Wait backhanded it in at the left post at the 12:27 mark. Wait was below the goal line when he batted it home.
UML’s deficit grew to 2-0 just 2:13 later.
Skating into UML’s zone on a 3-on-2 break, Hockey East Player of the Year Bobby Trivigno skated over to the left faceoff circle and sent a wrist shot through a screen and past Savory.
If UML falls short of making the national tournament, its four meetings with UMass will be why. The Minutemen won three and the other was a tie, though the River Hawks won 1-0 in the shootout.

Icy weather conditions can affect trees in your yard

Chicopee votes to ban dirt bikes and off-road vehicles from…

Christmas Mystery: Who are the WWII sweethearts in this…

Two suspects arrested in connection with murder in…