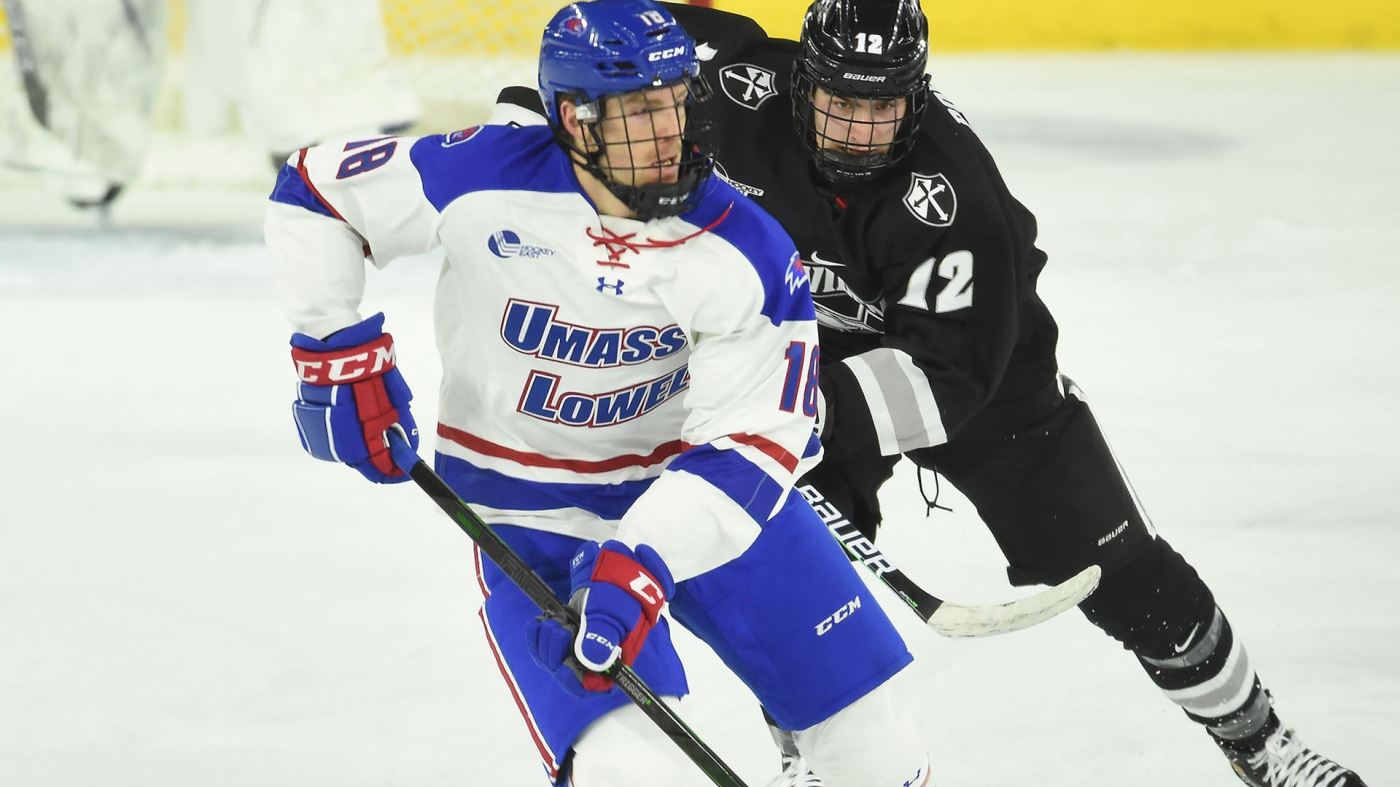 A 10-inch snowstorm kept many fans away from the Tsongas Center, but UMass Lowell — after a less than inspired first period — created an avalanche of goals en route to a 5-1 non-league victory over Long Island on Friday night.

“We have some of the best fans in college hockey, but I didn’t really care about how many people were in the building. It was about us starting to play playoff hockey,” head coach Norm Bazin said. “I liked the fact that we were good on special teams. Our goal was to play 60 or 65 minutes and I thought we did that.”

“I thought Nick Austin was one of our best players,” Bazin said. “I thought Brushett had his best game of the year.”

Trailing 1-0 after one, the River Hawks dominated the middle period, outshooting the visitors 15-1 and scoring three goals to go up 3-1.

Goals by Chambers, Stefanson and Berglund in a span of 7:14 gave the River Hawks a commanding lead.

Blake Wells set up the first goal, stealing the puck behind the net and feeding in front to Chambers, who one-timed a shot into the top right corner at 9:28. UML then scored on its first two power plays and pulled ahead.

Brushett was the catalyst behind both. On the first goal, he dished cross ice to Stefanson, who took two strides after collecting the puck and sending a shot inside the left post past Kris Carlson (29 saves) at 15:31.

The lead became 3-1 just 71 seconds later when Brushett set up Berglund. Brushett skated around an LIU defender, skated into the middle, and fed to his left to Berglund at the left faceoff circle. Berglund pushed a shot into the top left corner. Brushett, a transfer from Nebraska Omaha, earned his 19th and 20th points of the season.

Austin picked up assists on both power play goals.

The previous time UML had allowed only one shot on goal at home was Nov. 9, 2018 during the second period against New Hampshire.

Crasa and Condotta scored in the third period to salt the game away.

“Every game for us from here on out is a playoff game and we’ve got to be ready to play,” Condotta said. “We played a full 60. We outwilled them, if you will.”

The first period was not good for UML. The hosts had only one shot on goal in the opening 12 minutes and by then they found themselves in a 1-0 hole.

Nolan Welsch picked the pocket of defenseman Marek Korencik near the blue line, skated to the right faceoff circle, and fed in front. PJ Marrocco then beat defenseman Jon McDonald to the puck and slid it home past Savory at the 7:51 mark.

UML also took the only two penalties of the opening period and were outshot by a 10-8 margin.

“It was a good game,” Bazin said. “You like to take steps forward with your game this time of year and I thought we did that.”

The River Hawks close the regular season next weekend with a pair of games against UNH.

Cold and bright to start the weekend, icy to end it |…

What will happen to Jeffrey Epstein’s $27.5M New Mexico…