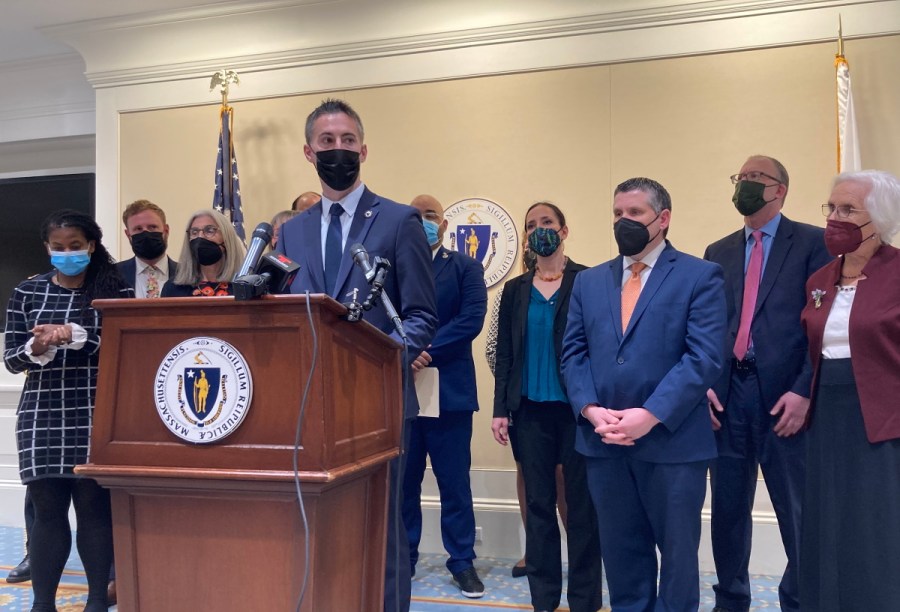 BOSTON, Mass. (SHNS)–The Senate next week plans to pass a bill that would give immigrants without legal status a pathway to apply for and obtain Massachusetts driver’s licenses, and supporters say they believe they have enough votes for it to survive a possible veto from Gov. Charlie Baker.

The Senate teed up the bill (S 2851) for debate next Thursday, May 5, with amendments due Monday afternoon. Senate President Karen Spilka said the bill was “very close” to the version the House passed in February, and Sen. Brendan Crighton described the differences as technical.

At a press conference with 13 senators, Roxana Rivera of the union 32BJ SEIU said versions of the license access bill have been filed on Beacon Hill for almost 20 years. It’s been the subject of a fierce advocacy push, including a hunger strike by activists at one point in 2020. Massachusetts Immigrant and Refugee Advocacy coalition executive director Elizabeth Sweet said in a statement that the Senate’s expected vote marks a “thrilling moment in the fight for immigrant and refugee rights across Massachusetts.”

Next week’s vote would move the measure a step closer to Gov. Charlie Baker’s desk, and because he has in the past said he opposes the idea of driver’s licenses for unauthorized immigrants, backers are mindful of a potential veto.

The House passed its bill with a 120-36 vote, above the threshold needed to override a veto. If all senators vote, the Senate would need votes from at least 27 senators for an override. “I’m pretty sure and very confident that the Senate will pass this, and if it does come back to it, we will make sure we have the same [votes for] an override,” Sen. Adam Gomez said. Gomez, a Springfield Democrat, said the bill would give undocumented immigrants “the same opportunities and comfort that many of us take for granted — the ability to drive without concern across the state, the ability to take a job and get to one place to another.”

Crighton said that Massachusetts residents who lack federal immigration status would, under the bill, be able to apply for a standard driver’s license if they show a foreign passport, a consular identification document, and at least one of five other documents — a driver’s license from another state, a birth certificate, foreign national ID card, foreign driver’s license or marriage certificate issued by any U.S. territory. “Every single person who applies for a standard driver’s license in Massachusetts must also provide a document providing they live here, and residents covered by this legislation would be no different,” the Lynn Democrat said. “We’ve worked very closely with a wide range of stakeholders here, including law enforcement, to fine-tune this language.”

During the House’s debate, Rep. William Straus described the documentation requirements as meeting the “Baker standard,” as the governor had previously voiced concern with the concept of giving licenses to people who cannot prove their identity. Baker has suggested he might still have reservations, saying after the House’s vote: “This license we’re talking about is not a privilege-to-drive card, which is what they have in a bunch of other states. It looks exactly like a Massachusetts driver’s license. You can’t tell the difference between this and a regular one.” Baker also said last month that he was disappointed that the House rejected a Minority Leader Brad Jones amendment that would have required the Registry of Motor Vehicles to share information with municipal clerks looking to verify a license holders’ eligibility to vote.

The House added language to its final bill to clarify that a license or learner’s permit applicant who does not provide proof of lawful presence will not be not automatically registered to vote under the state’s automatic voter-registration law.

The Senate’s bill would task the secretary of state’s office with developing regulations to ensure driver’s license applications did not result in improper voter registration, Crighton said.

In the House, bill opponents raised concerns around voter registration and the possibility of incentivizing illegal immigration, and said that while supporters tout the backing of law-enforcement groups, others in law enforcement have declined to endorse it. Similar arguments could emerge when the Senate takes up its bill.

One of the endorsing groups is the Massachusetts Major City Chiefs of Police Association. Lawrence Police Chief Roy Vasque, the association’s vice president, said the bill would help make sure people are trained and insured before getting on the roads. He said a sticking point for him with past versions was that the “identification process didn’t go far enough” but this year’s bill “really emulates a regular licensing application.” “So again, how does this not go through?” he said.

No House Republicans voted for the bill. None of the Senate’s three Republicans attended Thursday’s press conference.

Efforts to save historic elm tree in Amherst

A Powerful Nor'easter May Be Coming ~ Heavy Snow Threat

Suspect steals car with 3 kids inside, crashes after police…

Longmeadow Board of Health changes mask mandate to advisory