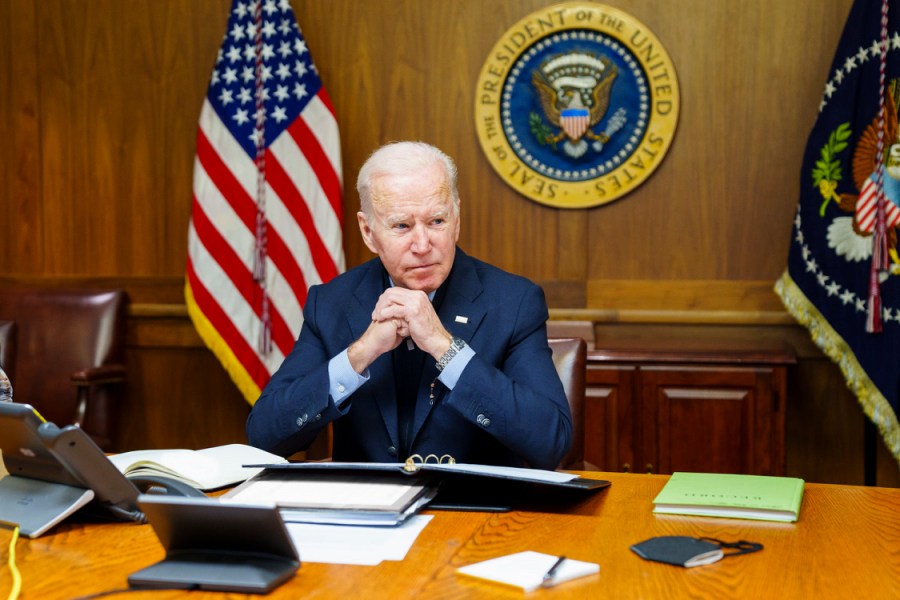 (NewsNation Now) —Russian President Vladimir Putin on Thursday announced a military operation in the Donbas region of eastern Ukraine. The following reactions are the latest tweets from U.S. President Joe Biden and White House press secretary Jen Psaki, among other lawmakers and politicians.

“The prayers of the world are with the people of Ukraine tonight as they suffer an unprovoked and unjustified attack by Russian military forces. President Putin has chosen a premeditated war that will bring a catastrophic loss of life and human suffering.”

“Russia alone is responsible for the death and destruction this attack will bring, and the United States and its Allies and partners will respond in a united and decisive way. The world will hold Russia accountable.”

“@POTUS was briefed on a secure call this evening by Secretary Blinken, Secretary Austin, Chairman Milley and National Security Advisor Jake Sullivan about the ongoing attack on Ukraine by Russian military forces.”

“@POTUS is closely monitoring the developments in Ukraine and he will continue receiving regular updates from Jake Sullivan, his National Security Advisor. He also spoke with his UN Ambassador, Linda Thomas Greenfield before the UNSC meeting this evening.”

Kuleba demanded that action must be taken into Russia’s military operation in Ukraine.

The world must act immediately. Future of Europe & the world is at stake.

2. Fully isolate Russia by all means, in all formats

“Putin has launched a full-scale war against Ukraine. Strikes continue on peaceful Ukrainian cities. This is a war of aggression. Ukraine will defend and win. The world can and must stop Putin. It’s time to act — just now.”

Trudeau on Wednesday issued a statement on Russia’s attack on Ukraine.

“Tomorrow morning, I’ll be meeting with G7 partners to collectively respond – including by imposing sanctions additional to those announced earlier this week. These reckless and dangerous acts will not go unpunished.” Canada calls on Russia to immediately cease all hostile and provocative actions against Ukraine, and withdraw all military and proxy forces from the country. Ukraine’s sovereignty and territorial integrity must be respected. Canada condemns – in the strongest possible terms – Russia’s egregious attack on Ukraine. These unprovoked actions are a clear further violation of Ukraine’s sovereignty and territorial integrity, and of Russia’s obligations under international law and the Charter of the UN.

“We pray for the people of Ukraine as they defend against Putin’s attempt to rebuild the old Soviet Union. Biden must stand up to Putin and immediately levy severe sanctions against Russia — starting with removal from the SWIFT banking system.

The USA stands with Ukraine.”

“Long-range missile launches from #Russia are now underway. They are headed towards various pre-selected military sites throughout #Ukraine“

Rubio went on to clarify what he meant about the launches.

“This is Putin’s war,” Schiff tweeted.

Senseless, tragic, and barbaric. We must enact debilitating sanctions on Russia and cut them off from the global economy. And, in the meantime, we pray for the Ukrainian people. And an end to this madness.”

This is a breaking news story and will be updated.

Gaspar, Sciortino make quite a pair for Billerica/Chelmsford – Lowell Sun

Expert: don’t give the government a tax-free loan | News

Roderick Ireland Courthouse in Springfield evacuated due to…

Looking back: How our Washington News Bureau covered the…