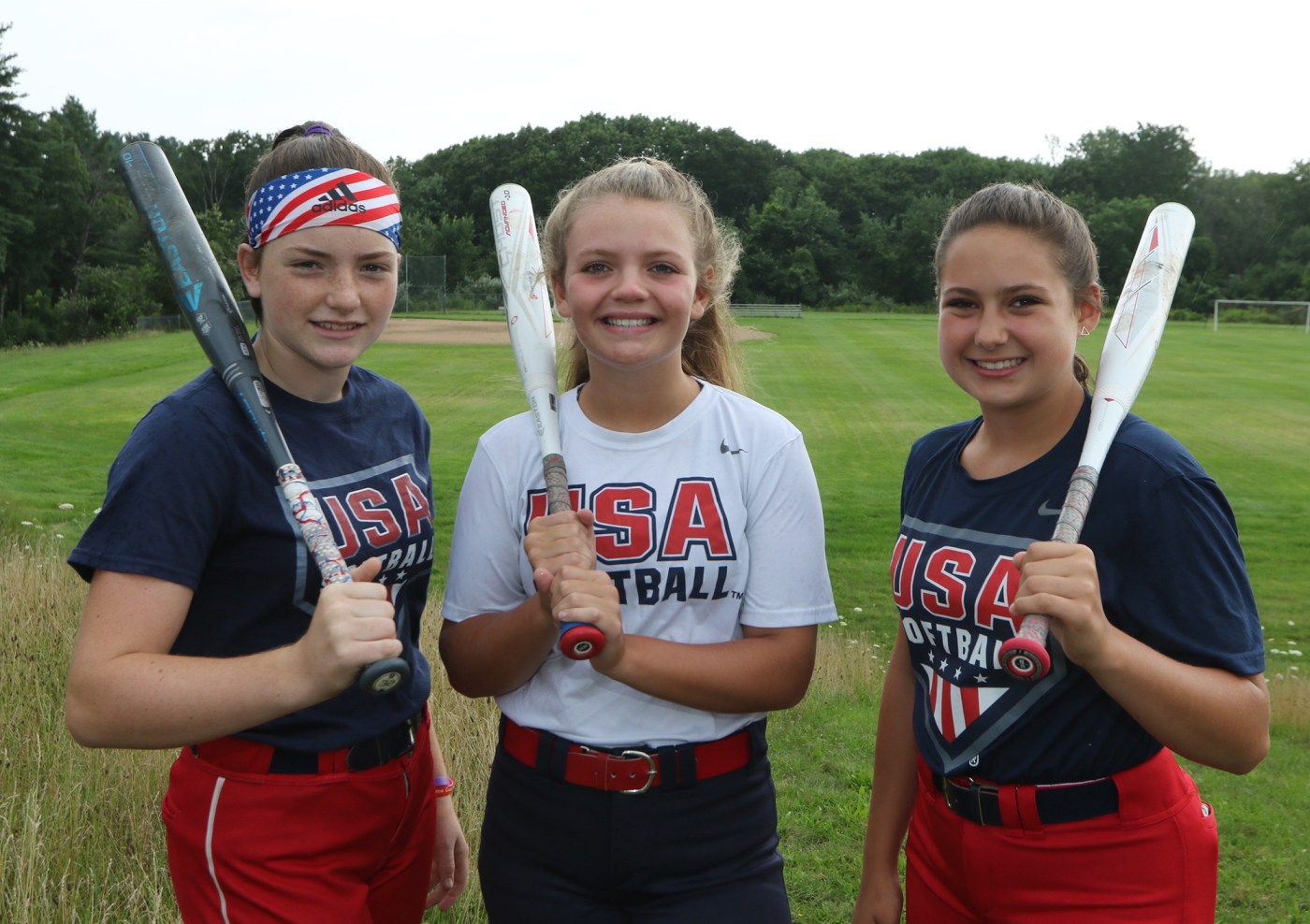 TYNGSBORO — Back on June 29, the town of Tyngsboro celebrated as the high school softball team captured its first-ever Division 2 state championship with a thrilling 6-5 win over Dighton-Rehobeth.

Certainly, the win and the Tigers’ season put the town on the softball map, and in just a few weeks, three girls who are in middle school will once again represent the town in major fashion.

Amaya Flood and Kiley Hogan, both 12, along with Carly Smith, 11, will be heading out to Oklahoma City on Aug. 13 to compete in the USA Softball 12U All-American Games, which consists of at least 24 teams from across the entire country, and 15 players on each squad. Both Amaya and Kiley will play on the same Northeast Stars Team, while Carly will suit up for a team based out of New Jersey.

Hogan, whose older sister Emma was the starting third baseman on the state championship team, was the lone representative from Tyngsboro to play in this tournament last year.

She said the level of play from local tournaments compared to this All-American one is drastically different.

“It was definitely an eye-opening experience, just seeing how our teams play here and how completely different the other teams play, especially from California, Texas, Florida and all of those teams, because they all practice year-round and it’s just completely different,” said Hogan, who will enter the eighth grade.

Hogan has previously played for the Northeast Hurricanes before switching over to the Polar Crush. She is a right-handed pitcher, who can throw in the mid 50s with her fastball, but also displays a changeup, a drop, a curveball and a screwball. Besides pitcher, she also plays second base and shortstop.

“Kiley’s 14U Polar Crush team only played in two 14U tournaments,” said her father, Tim. “They played in all 18U tournaments and the Crush put them into a position to have to play against better competition, so no matter how good you think you are here, you see what the rest of the country is doing. We want to put Kiley in a position to obviously excel, and to get the best experience and exposure that she can get along with the best coaching.”

Flood grew up playing rec ball with Kiley and has been playing with the Spinners Club for the past three years. She, too, is a pitcher, but left-handed and with a variety of pitches, including a fastball, curveball and a flip change-up, a difficult pitch to master.

“It took me about a year to get it down and really learn it and get good with it. It’s probably one of the most challenging pitches (to throw),” she said.

While Hogan and Flood have played together since they were five, Smith only picked up the sport three years ago.

“My dad brought me to a UMass Lowell softball game and this girl hit a walk-off home run and that just really inspired me to start playing,” she said.

He said the following morning after that UML game, his daughter asked him to sign her up. Three years later, she overcame the odds to make it to this elite tournament.

Mostly a pitcher and a catcher, Smith didn’t make the teams in Pennsylvania or the one with Hogan and Flood. That didn’t stop her, asking her father to take her for a six-hour drive each way, so she could try out one more time.

“When I went to New Jersey, I knew what I was there for, I knew what I wanted to do and I knew what my goal was,” she said. “When I found out that I made it, I was just so happy that I would be able to do this. I gave it my all (during the tryout) and I just thought that if I make it, I make it and if I don’t, then I know I tried my hardest. (The feeling) was just all joy, and some tears.”

The three of them will board a plane in several weeks to compete in this tournament, which consists of three pool games, and more if their respective teams advance.

Moving into the Woods Alone

Eduardo Rodriguez takes another step back in Red Sox’ ugly…

The Stars Come Out at Night – Maine USA – Stars,…

Delta Variant is Different – It's the NEW COVID