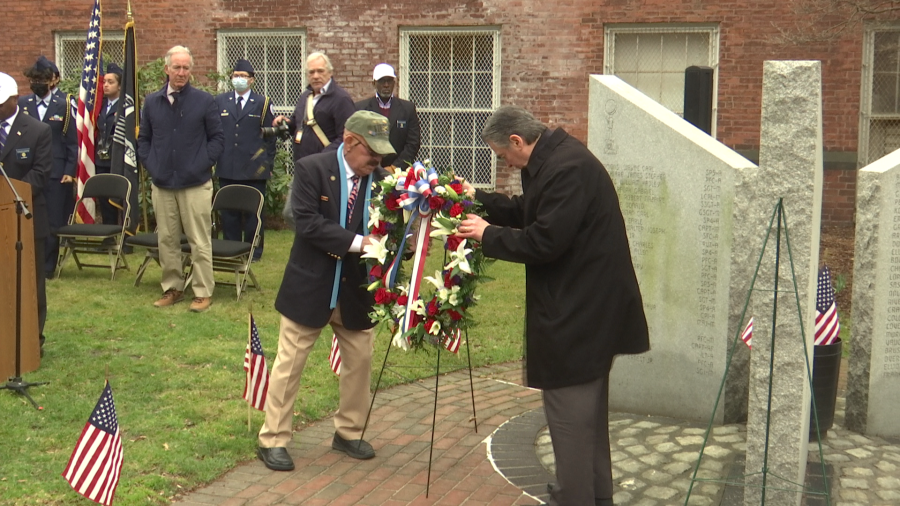 SPRINGFIELD, Mass. (WWLP) – A solemn, yet uplifting ceremony saluting the sacrifices of Vietnam veterans from Springfield who died fighting for their country.

With dozens of Vietnam veterans and their families attending the ceremony, Mayor Domenic Sarno and and Massachusetts Vietnam Veterans of America President Gumersindo Gomez placed a wreath at the Vietnam veterans memorial across from city hall.

Gomez called attention to ugly history of so many Vietnam veterans having returned home to disrespectful treatment, and how those veterans became an inspiration for future veterans.

“We have paved a way for the other veterans coming behind us, so they can have the benefits that we had problems,” Gomez said. “Now we’re working for them and they are honored.”

Mayor Domenic Sarno told 22News, he felt humbled to participate in this ceremony honoring the war dead, and to be in the company of these giants who had served their country so well.

“You know we live the lives we lead because of our veterans,” Mayor Sarno said. “And the United States of America is still the greatest nation in the world as a beacon of hope and democracy.”

This annual commemoration known as the 50th anniversary of the Vietnam War never fails to attract the veterans with much to share and to remember. Former Springfield city councilor Dan Walsh, a marine Captain during the Vietnam war, is filled with bittersweet feelings.

Walsh told 22News, “It brings to mind all the men who gave their lives, and it brings back bittersweet memories. You wish they were still here, and you honor them for what they gave to their country.”

In the words of Vietnam veteran Gumersindo Gomez during Sunday’s ceremony, “We’re still kicking, still having an impact and helping our nation.”

NH man pleads guilty to stealing over $16,000 in batteries…

Reprieve from the rain today, but pattern remains unsettled…

TSA: What Thanksgiving foods you can carry-on, what has to…

FDA panel member opposed to COVID booster for all explains…

Is it time for me to get a COVID-19 booster? And which one…