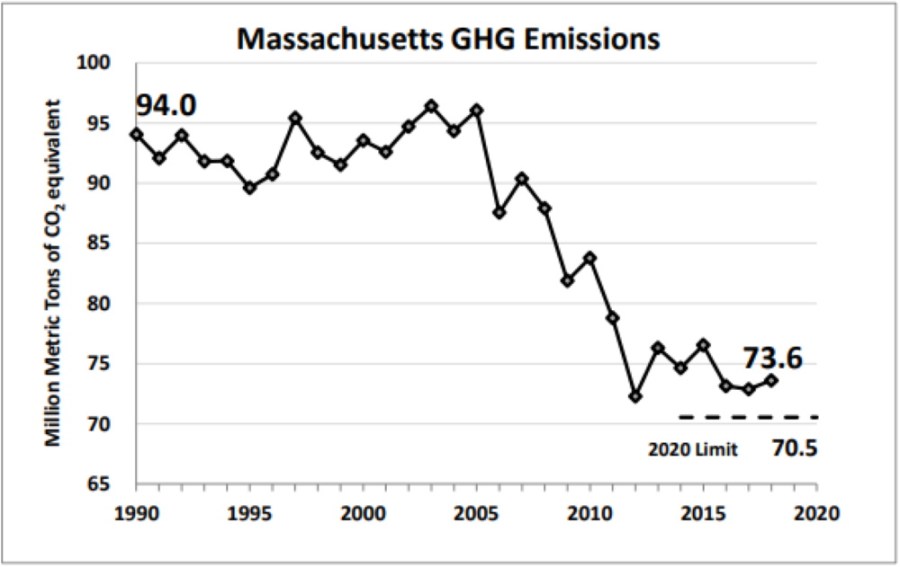 BOSTON (SHNS) – The state energy and environmental officials responsible for making sure Massachusetts meets its greenhouse gas emissions reductions commitments already had their work cut out for them and now a proposal to adjust the baseline that emissions are compared against could turn up the level of difficulty even further.

The Department of Environmental Protection is accepting public input for about the next month on its proposal to update the statewide greenhouse gas emissions level for 1990, the calendar year that serves as the emissions benchmark under the Global Warming Solutions Act and the state’s subsequent updates. Under the proposal, the 1990 emissions level would be revised downward from the 94.4 million metric tons of carbon dioxide equivalents (MMTCO2e) established in a 2016 update to 94 million MMTCO2e.

The figure is of great importance to the state’s climate policy because it is the number against which emissions reduction progress is measured. State law requires that Massachusetts reduce its emissions by 25 percent by 2020, by 50 percent by 2030, by 75 percent by 2040 and by at least 85 percent by 2050, all compared to the 1990 baseline.

The difference by 2050 would be about 60,000 metric tons of CO2 equivalents, which is roughly equal to the annual greenhouse gas emissions of 13,049 cars or the annual CO2 emissions from energy use of 10,899 Massachusetts homes, according to the U.S. Environmental Protection Agency.

Secretary of Energy and Environmental Affairs Kathleen Theoharides told lawmakers last week that DEP’s preliminary estimates show that Massachusetts greenhouse gas emissions in 2020 were roughly 28.6 percent less than what was emitted into the atmosphere in the benchmark year 1990 using the current 1990 baseline emissions total of 94.4 MMTCO2e. That would work out to 2020 emissions of roughly 67.4 MMTCO2e.

“I know you agree this is not necessarily cause for celebration. 2020 was an abnormal year by any stretch of the imagination, but we did also see the numbers ticking down in 2019. And so we do believe that the climate policies we’ve been implementing, the energy changes we’ve been making, are having a significant effect,” Theoharides told the Senate Global Warming and Climate Change Committee.

If the proposed new baseline were used, the figures Theoharides gave would work out to an estimated reduction of about 28.3 percent. DEP said it “is still in the process of compiling data for 2019 and 2020 and is awaiting data from federal sources to calculate progress in those years.”

By July 1, Theoharides must adopt emissions limits and sector-specific sublimits for 2025 and 2030, and publish “comprehensive, clear and specific” plans to achieve them.

DEP said the GWSA required it to set a 1990 baseline and stipulated that it “should be reevaluated as needed (e.g., when significant new data becomes available), using a full public review process.”

The agency set the initial baseline in 2009 and updated it in 2016. Based on “significant improvements to data methodologies and underlying data sources,” DEP last May made an initial proposal to again update the baseline. Since the May 2021 proposal “[t]wo additional issues involving data sources and methodologies have developed,” DEP said, which led to this latest addendum.

The agency said that federal partners informed the state in August 2021 of corrections made to certain emissions categories that resulted in a 0.6 MMTCO2e decrease to 1990 emissions. And in October, DEP said, the U.S. Energy Information Administration updated the methodology used to determine state-level jet fuel use.

DEP will accept written comments on its proposal until 5 p.m. on Thursday, March 24. Comments should be emailed to climate.strategies@mass.gov or sent by mail to Sue Ann Richardson, MassDEP, One Winter St., 6th Floor, Boston, MA 02108.

Despite problems, Brady Belichick team likely to go down in…

Local parents mixed on idea of bringing back blizzard bags |…

Just in time for Tokyo games, Olympic items up for auction –…

Colon ready for next round at New England Golden Gloves –…