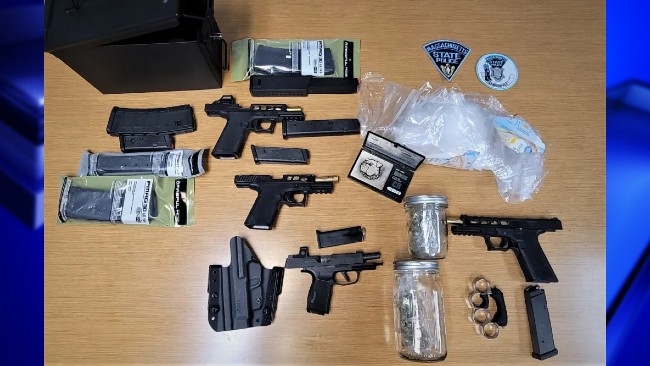 According to a social media post by Massachusetts State Police, at around 7 p.m. Monday, Trooper Spiridon Perdikomatis who was assigned to a distracted driving enforcement campaign in the State Police-Belchertown patrol area saw a gray Chevy Silverado with the driver holding and using a cell phone and was the precise target of the enforcement campaign. Trooper Perdikomatis pulled toward the vehicle and activated his emergency lights. The car eventually stopped at the intersection of Route 32 and Route 9 in Ware.

State Police identified the driver as Kyle Juda, 20, of Gilbertville. While speaking to Juda, Trooper Perdikomatis requested the vehicle’s registration and proof of insurance. Juda opened the glove box, at which point Trooper Perdikomatis immediately observed a firearm within, neither Juda nor the passenger, identified as Devin Jauridez, 19, of Ware, possessed a license to carry firearms. Additional Troopers then arrived on the scene to help. Jauridez was removed from the vehicle first and arrested. While doing so a firearm magazine was located in his pocket. Next, Juda was removed and arrested. Troopers located brass knuckles in his pocket.

Kyle Juda, 20, of Gilbertville was charged for the following:

Devin Jauridez, 19, of Ware was charged for the following:

Patriots releasing Gilmore after failing to agree on…

Thunderbirds: over 5,000 stuffed animals collected during…

Strategies to lower your debt and save money | News

If You Got Pfizer/Moderna Vaccine, FDA Says Expect These…