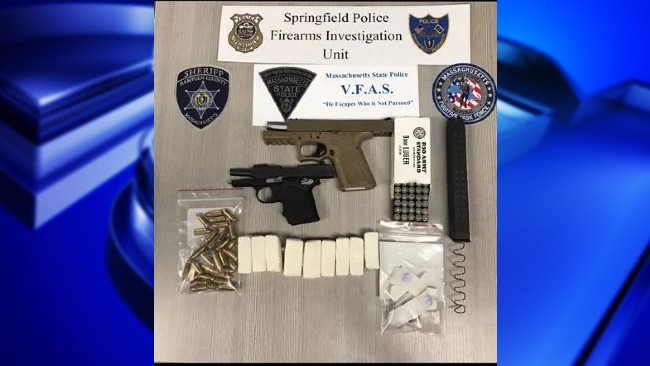 According to a social media post by the Massachusetts State Police, Neftali Marcial, 24, was wanted on two arrest warrants obtained by Springfield Police. The first came from Marcial physically assaulting and raping a former girlfriend on Feb. 6 of this year. The second warrant, involved a different former girlfriend, with Marcial allegedly locking that victim in his basement against her will and physically abusing her for approximately two weeks. State and local police and members of the task force attempted to locate Marcial at several addresses of interest with no results.

On Tuesday, investigators found information that Marcial was in the area of 29 Genesee Street. Troopers, officers, and task force members went to the address and found Marcial sleeping in a first-floor bedroom and arrested him.

While arresting him, team members observed narcotics and a firearm magazine in plain view.  They secured the apartment and applied for a search warrant, which was granted. The subsequent search of the apartment resulted in the discovery of two firearms, one of them with an extended magazine, ammunition, and a large amount of heroin.

Families enjoy brunch with Santa at the Delaney House in…

Pleasant start to the week; fall chill arrives by mid-week |…

Antonio Brown ‘no longer a Buc’ after stripping down…