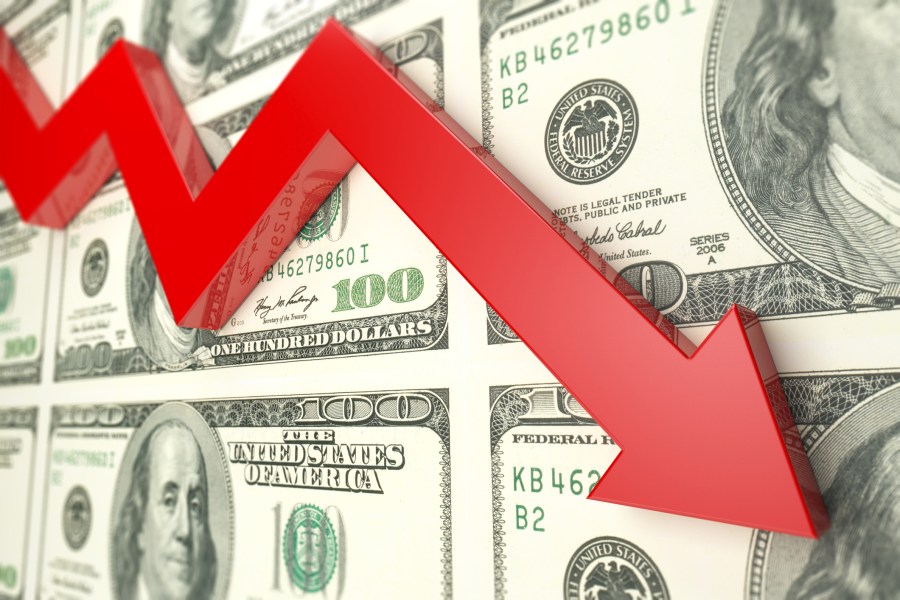 NEW YORK (AP) – Losses for technology stocks are accelerating on Wall Street, pushing the Nasdaq toward its biggest monthly loss since the 2008 financial crisis.

A sharp drop in Amazon was helping to pull indexes lower after the internet retail giant posted its first loss since 2015. Big Tech has been leading the market lower all month as traders shun the high-flying sector.

Tech had posted gigantic gains during the pandemic and now is starting to look overpriced, particularly with interest rates set to rise sharply as the Federal Reserve steps up its fight against inflation. The Nasdaq fell 3.5% and is down 12.6% for the month.

THIS IS A BREAKING NEWS UPDATE. AP’s earlier story follows below.

Stocks fell broadly in afternoon trading on Wall Street Friday, putting major indexes back into the red for the week after several sharp moves both up and down over the past few days.

Major indexes have been shifting between slumps and rallies throughout the week as the latest round of corporate earnings hit the market in force. Investors have been reviewing a particularly heavy batch of financial results from big tech companies, industrial firms and retailers.

The volatile week caps off a dismal month for stocks as traders fret about the tough medicine the Federal Reserve is using in its fight against inflation: higher interest rates. That will increase borrowing costs across the board for people buying cars, using credit cards and taking out mortgages to buy homes.

Internet retail giant Amazon slumped 13.9% after reporting a rare quarterly loss and giving investors a disappointing revenue forecast. The weak update from Amazon comes as Wall Street worries about a potential slowdown in consumer spending along with rising inflation.

Prices for everything from food to gas have been rising as the economy recovers from the pandemic and there has been a big disconnect between higher demand and lagging supplies. Russia’s invasion of Ukraine has only added to inflation worries as it drives price increases for oil, natural gas, wheat and corn.

The Commerce Department on Friday reported that an inflation gauge closely tracked by the Federal Reserve surged 6.6% in March compared with a year ago, the highest 12-month jump in four decades and further evidence that spiking prices are pressuring household budgets and the health of the economy.

The latest report on rising U.S. inflation follows a report from statistics agency Eurostat that shows inflation hit a record high in April of 7.5% for the 19 countries that use the euro.

Bond yields rose following the hot readings on inflation. The yield on the 10-year Treasury rose to 2.90% from 2.85%.

Persistently rising inflation has prompted central banks to raise interest rates in order to temper the impact on businesses and consumers.

Much of the anxiety on Wall Street in April has centered around how quickly the Fed will raise its benchmark interest rate and whether an aggressive series of hikes will crimp economic growth. The chair of the Fed has indicated the central bank may raise short-term interest rates by double the usual amount at upcoming meetings, starting next week. It has already raised its key overnight rate once, the first such increase since 2018, and Wall Street is expecting several big increases over the coming months.

Investors spent much of April shifting money away from Big Tech companies, whose stock values benefit from low interest rates, to areas considered less risky. The S&P 500’s consumer staples sector, which includes many household and personal goods makers, is on track to be the only sector in the benchmark index to make gains in April. Other safe-play sectors, such as utilities, held up better than the broader market, while technology and communications stocks are among the biggest losers.

CDC urges people to get the flu vaccine

The Fund Factor | With Sunil Maini | Tax and financial…

Taco Bell’s Mexican Pizza had a different name in 1985: Do…

Nine lawyers allied with Trump ordered to pay $175K in…

Antonio Brown says he was forced to play injured by Bucs –…

US to lift omicron-linked travel ban on southern Africa |…

Toys for Tots Drive at 22News