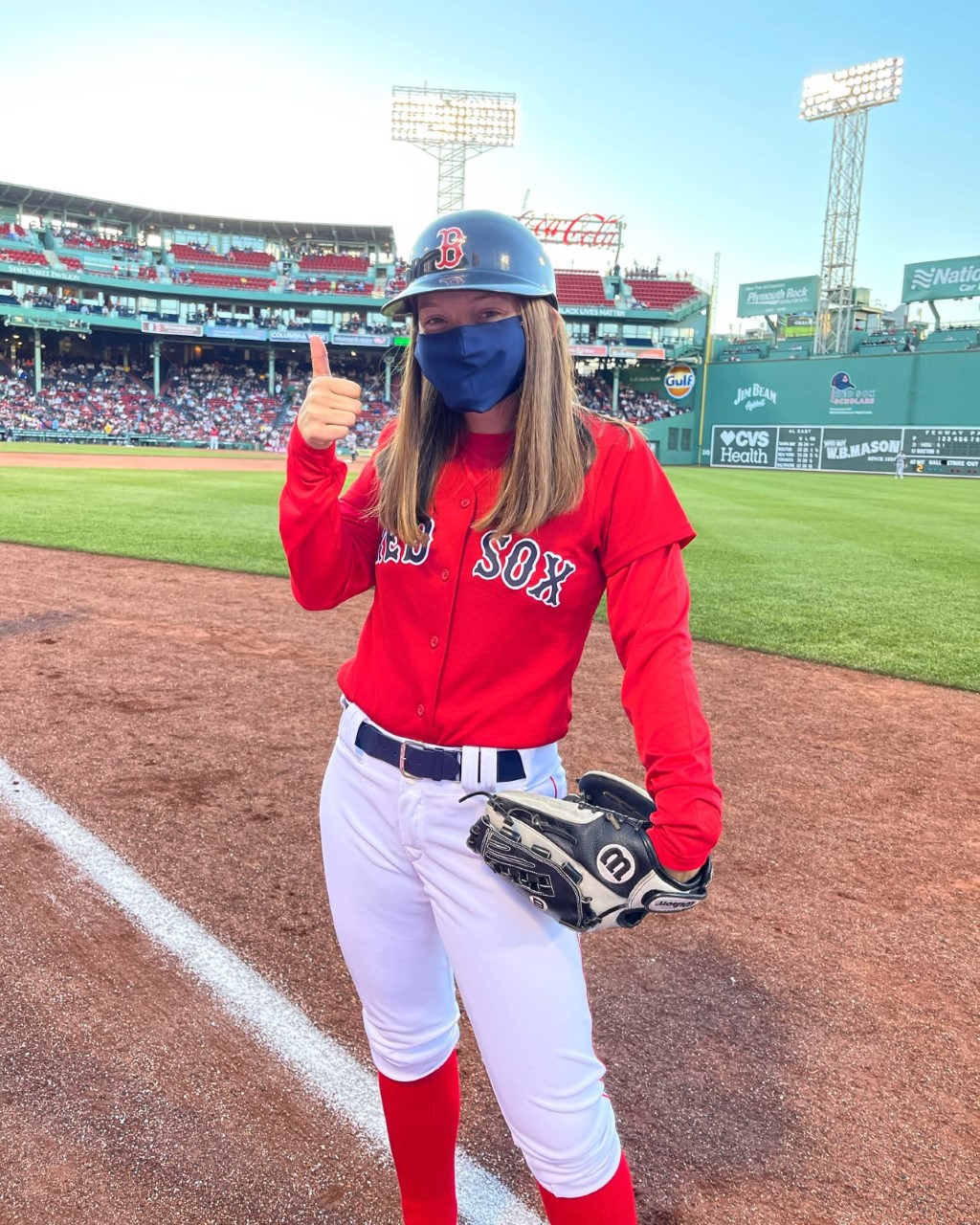 But until that day arrives, she wants to have fun in sports for as long as she can. And if you saw her on your television screen as a ballgirl during last weekend’s Red Sox games at Fenway Park, you know that she is indeed having the time of her life.

The 22-year-old Westford resident plays two sports — softball and basketball — at Framingham State University, which includes being a two-year All-Conference selection in two different positions on the softball diamond. This past spring, she tied a program-record for home runs in a season with five.

On top of that, she’s been a part of three teams that have won MASCAC titles and have played in the NCAA Division 3 tournament. She finished her senior year in the spring, but still has eligibility remaining, due to COVID-19 wiping out the 2020 season. She plans to play for FSU next year, while pursuing her Master’s degree.

Desrochers, a Westford Academy grad, has played the two sports for a long time, following her older siblings, Rachel, a former Framingham State softball player and now an assistant coach with the program, and Allan, who competed on the UMass crew team.

“It’s so much fun. It’s the craziest thing, I sit on the field and I ask myself all of the time ‘how did I end up here?’ You definitely have to be paying attention, every pitch,” she said. “You have to be ready in case a ball comes at you. When you are on the first base side, you are about two feet from the foul line, you have to be really watching and, obviously, you can not touch a fair ball. That’s the first thing they said to me would be the hardest thing. You just have to be super aware and it’s just super fun. “The gist of the job is really talking to the fans and engaging with them, the ones sitting around you. You try to make their experience as fun as possible. You hand out the foul balls to all of the little kids and see how excited they get — it’s just amazing.

“The first game, I didn’t get anything, but then the other day I probably gave eight or maybe 10 to the fans.”

Desrochers has worked five games thus far and has others scheduled, including an upcoming Yankees game. Besides tracking down the foul balls, she said there’s more to the job.

“We basically run the pregame ceremonies. We catch all of the ceremonial first pitches, we walk people out, or we will read their stories to the entire stadium,” she said. “I have met some cool people and some celebrities. I was there for the Dustin Pedroia Night, so I was standing right next to Jacoby Ellsbury and Pedro Martinez, and I was directing them where to sit down and what to do. I sit there and just say ‘how am I able to do this?’ It’s just so much fun.”

Desrochers was recruited as a shortstop, but when she arrived as a freshman the team needed a catcher, so she volunteered, saying she had some past experience.

All she did that season was bat .297 with 12 RBI and eight stolen bases, and helped the team win the league title. She was a MASCAC Second Team All-Conference selection.

“(As a catcher) right away you realize that everyone (in college) is faster, they are bigger and run the bases better (than they do in high school),” she said. “That’s definitely something you have to adjust to, but I had such great coaches and teammates and I was catching for the MASCAC Player of the Year, Kelsi Gunarathne, so that made my job easier.”

After batting ninth as a freshman, she was moved to the lead-off spot as a sophomore and batted .349 with two home runs and 24 RBI, while again stealing eight bases.

Those stats landed her on the league’s All-Conference team. After last year’s season was canceled, due to COVID-19, she was moved back to her normal shortstop position. She batted .277 with five home runs and 19 RBI, all coming from the No. 3 spot in the order.

“I remember talking to our athletic director, Tom Kelly, and he kind of gave me a look when I told him that we were moving her from catcher to shortstop, and I said ‘just wait and see.’ Unfortunately, he had to wait a whole 18 months to see, but her at shortstop this year was just so special to see,” said FSU softball head coach Larry Miller. “She makes the routine play, and then she’ll make a play and you’ll say ‘whoa.’

“She is just a leader in that spot as our shortstop. At the plate, she will say that she didn’t have her best season, but we moved her to the No. 3 spot in the order and she tied a program-record for home runs in a season. She is awesome in terms of a leader and a competitor. She’s just one of those kids who has to have something always happening. She’s just a great asset to our softball program.”

Which restaurants will be open on Christmas?

Girls Inc. of the Valley shares layout of new location