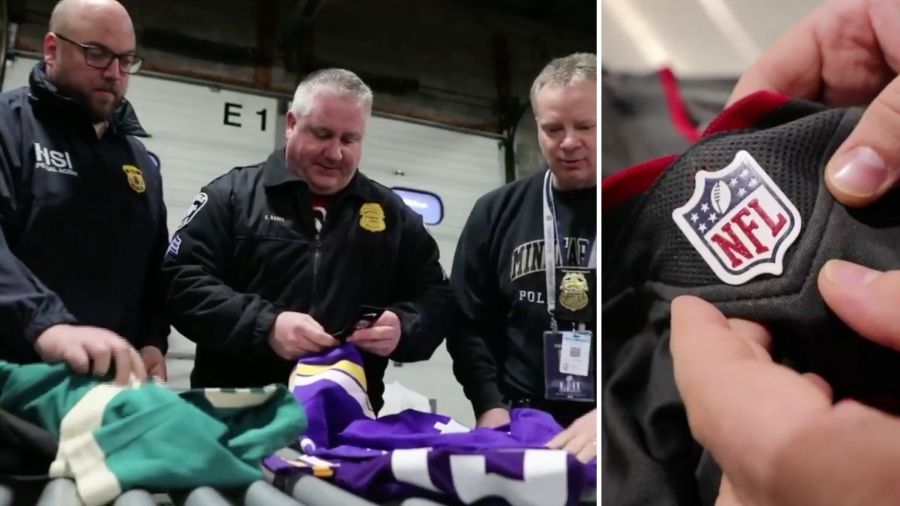 From street corners and swap meets, to flea markets and even inside malls, Homeland Security Investigations has a targeted approach to stopping vendors that prey on unsuspecting fans in Super Bowl host cities.

“From the day after one Super Bowl, we start working on the next city. So, for this year, in L.A., we started this last year back in Tampa,” said Lamar Jackson, the assistant special agent of L.A. Homeland Security.

Jackson said it may seem like a harmless crime, but lead investigators say the money acquired for a fake jersey, hat or T-shirt, is often used elsewhere for something more egregious.

“Whether its gangs using it to buy firearms, or terrorists using it to fund terrorist operations, the proceeds are often used to fund other crimes,” Jackson said.

While there is no federally mandated minimum sentence for selling fake merch, trafficking counterfeit goods can land someone up to 10 years in prison for a first offense, and 20 years for a second.

They can’t catch them all. Fans traveling to L.A. for the Super Bowl are advised to be vigilant and check merchandise for some sure-fire signs, starting with the 3D NFL logo hologram. Plus, don’t be afraid to examine jerseys hands on or turn them inside out.

Overnight rain to bring in a fall chill starting Sunday |…

Veteran walks from Chicopee to the Statehouse to bring…

Staying mild through Saturday before a return to winter |…